Many millions of years have passed since the terrifying night of the past in which we began slowly evolving and devolving. Yet, the human being still does not know who he is, where he comes from, nor where is he going.

A lethargy of many centuries weighs over the ancient mysteries, yet the Verb still awaits at the bottom of the Ark for the instant of its realization.

Behind the Edenic tradition, there is a terrible cosmic desideratum and sacred errors which frighten and horrify.

Thus, today, as at all times, we are confronting our own destiny. We face the psychological dilemma of To be, or not to be?

Much has been said about the Sacred Serpent [Editor: the Kundalini ] , yet now we are going to speak clearly about the Kundabuffer Organ. 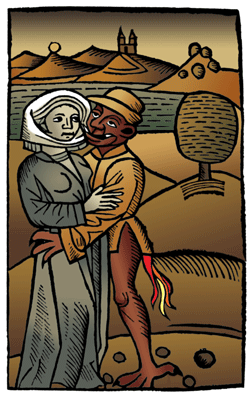 All of the efforts made by Prophets, Avatars and Gods in order to end the harmful consequences of the Kundabuffer Organ have been in vain.

It is necessary to know that the Kundabuffer Organ is the negative development of the fire. This is the descending serpent, which precipitates itself from the coccyx downwards, towards the atomic infernos of the human being.

The Kundabuffer Organ is the horrifying tail of Satan, which is shown in the “body of desires” of the intellectual animal, who in the present times is falsely called “man.”

What is worst, which hurts the soul the most, is to know that the ones who gave the Kundabuffer Organ to this humanity were some sacred individuals.

Ancient traditions state that during the Lemurian epoch certain sacred individuals came to the Earth in a cosmic astro-ship.

These individuals were forming a very high sacred Commission which was entrusted with studying the evolving and devolving problems of the Earth and its humanity.

The Archangel Sakaki and the Principal Archphysicist and Universal-Common-Chemist Angel Looisos were the two main individuals from this holy divine Commission.

This sacred Commission of ineffable beings is behind the whole drama of Eden. They came with bodies of flesh and bones; their ship landed on Lemuria. During that ancient age, the human instinct was starting to develop itself into objective reasoning.

This very high Commission could verify to satiety that the Edenic human being already started to suspect the reason for his creation.

The Lemurian Root Race had started to guess the true motives of its own existence, a miserable existence with just mechanical motives.

Each human being is a little machine who captures and transforms cosmic energies, then he unconsciously adapts these energies into the interior layers of the earth. Thus, we are human machines... nothing else. What would this world be without the human machines?

Without this seal, without this physiognomy, which is supplied by this humanity, the planet would be without a purpose. Thus, everything which is without purpose ceases to exist.

Humanity as a whole is an organ from Nature. This organ collects and assimilates cosmic energies which are necessary for the development of this planetary organism. Disgracefully, to be a machine is not very pleasant, yet it is what the so-called “human being” is... he is a machine... that is what he is... yes, that, and nothing else.

When a rebel rises with his weapons against Nature, when he wants to stop being a machine, then the tenebrous powers fight against him to death.

The human beings who are capable of fighting the tenebrous forces, to fight against Nature, against the cosmos, etc., are very rare. Commonly, these type of rebels capitulate.

Many are called, yet few are chosen. Only a few individuals attain victory against Nature and achieve the right to sit on the throne of power in order to rule over it.

The Lemurians already had suspected all of this. They understood with their instinct that human beings, after having offered their services as machines to this Nature, were becoming perverse.

Therefore, this sacred Commission, after having serenely inspected this problem, resolved to take drastic cosmic procedures in order to avoid the total dissolution of the human genre and even mass suicide.

Great cosmic desiderata are behind Adam and Eve. This sacred Commission is what is hidden behind that drama and Edenic scenario. Thus, everything was fulfilled and the human being received the damned stigma, the Kundabuffer Organ.

In the course of time... maybe many centuries after... the Holy Commission returned, this time commanded by the Archseraphim Sevohtartra, due to the fact that the Archangel Sakaki had converted himself into one of the four tetra-sustainers of the Universe.

The fact then was that after a severe examination of the situation, the archphycisian and chemist Angel Looisos destroyed the Kundabuffer Organ from within the human race, since the human race did not need it anymore. The human being had abandoned all of his suspicions as he had become fascinated with the beauties of this world.

The Gods saved the human being from a great crisis. They achieved making the human being fascinated with this world in order that he could live within it as any planetary citizen. Yet, the Gods could not save him from the evil consequences of the Kundabuffer Organ.

Truly, the evil consequences of such an organ were converted into mistaken habits and customs that entered the depths of our psyche and became converted into the subconsciousness.

Thus, the ego or the psychological “I” is the same subconsciousness that is rooted in the evil consequences of the Kundabuffer Organ.

The most saintly Ashiata Shiemash fought very hard in order to take the evil consequences of the Kundabuffer Organ out from humanity.

The Holy Lama in Tibet also suffered very much in order to save humanity from the horrifying consequences of the aforementioned fatal organ.

Buddha, Jesus, Moses and other Masters passed through much bitterness in order to liberate humanity from the disastrous consequences of the Kundabuffer Organ.

Therefore, the Sacred Commission of Ineffable Beings threw upon their shoulders a terrible cosmic karma. They will pay such karma in the future Manvantara.

Listen to me, Gnostic brothers and sisters:

You must comprehend that you can end the evil consequences of the Kundabuffer Organ only with the three factors of the revolution of the Consciousness.

These three factors are:

The “I” dies based on rigorous creative comprehension. The Being is born within us with the Maithuna (sexual magic) . Sacrifice for humanity is charity and very well understood love.

The schools which teach the ejaculation of semen, even when they do this in a very mystical way, are really Black schools, because the Kundabuffer Organ is developed with such a practice.

The schools which teach the connection of the Lingam-Yoni without the ejaculation of semen are White schools because this is how the Kundalini rises through the medullar canal.

The schools which teach how to strengthen the psychological “I” are Black schools because the evil consequences of the Kundabuffer Organ are strengthened with that procedure.

The schools which teach the dissolution of the “I” (Mystical Death) are White schools because they destroy the evil consequences of the Kundabuffer Organ.

The Kundabuffer Organ is the tail of Satan. It is the sexual fire descending from the coccyx downwards towards the atomic infernos of the human being.

By purchasing a print edition of "Elimination of Satans Tail", you get a high quality, permanent source of profound knowledge, you help us print more books, keep this website online, and allow us to give free books to prisoners, churches, libraries, and more.
Pick a Bookseller