Many believe the Hua Hu Jing (fourth century BC) was written by Lao Tzu. Although its authorship is contested, the contents of this book are remarkable. Here is a quote: 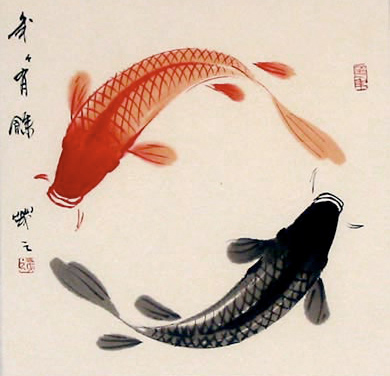 The interplay of yin and yang within the womb of the Mysterious Mother creates the expansion and contraction of nature. Although the entire universe is created out of this reproductive dance, it is but a tiny portion of her being. Her heart is the Universal Heart, and her mind the Universal Mind. The reproductive function is also a part of human beings. Because yin and yang are not complete within us as individuals, we pair up to integrate them and bring forth new life. Although most people spend their entire lives following this biological impulse, it is only a tiny portion of our beings as well. If we remain obsessed with seeds and eggs, we are married to the fertile reproductive valley of the Mysterious Mother but not to her immeasurable heart and all-knowing mind. If you wish to unite with her heart and mind, you must integrate yin and yang within and refine their fire upward. Then you have the power to merge with the whole being of the Mysterious Mother. This is what is known as true evolution.

The first integration of yin and yang is the union of seed and egg within the womb. The second integration of yin and yang is the sexual union of the mature male and female. Both of these are concerned with flesh and blood, and all that is conceived in this realm must one day disintegrate and pass away. It is only the third integration which gives birth to something immortal, In this integration, a highly evolved individual joins the subtle inner energies of yin and yang under the light of spiritual understanding. Through the practices of the Integral Way he refines his gross, heavy energy into something ethereal and light. This divine light has the capability of penetrating into the mighty ocean of spiritual energy and complete wisdom that is the Tao. The new life created by the final integration is self- aware yet without ego, capable of inhabiting a body yet not attached to it, and guided by wisdom rather than emotion. Whole and virtuous, it can never die.

To achieve the highest levels of life, one must continually combine new levels of yin and yang. In nature, the male energy can be found in such sources as the sun and the mountains, and the female in such sources as the earth, the moon, and the lakes. Those who study these things, which are only hinted at here, will benefit immeasurably. Because higher and higher unions of yin and yang are necessary for the conception of higher life, some students may be instructed in the art of dual cultivation, in which yin and yang are directly integrated in the tai chi of sexual intercourse. If the student is not genuinely virtuous and the instruction not that of a true master, dual cultivation can have a destructive effect. If genuine virtue and true mastery come together, however, the practice can bring about a profound balancing of the student's gross and subtle energies. The result of this is improved health, harmonized emotions, the cessation of desires and impulses, and, at the highest level, the transcendent integration of the entire energy body.

In angelic dual cultivation, one learns to follow the Tao. To approach the Tao, you will need all your sincerity, for it is elusive, first revealing itself in form and image, then dissolving into subtle, indefinable essence. Though it is uncreated itself, it creates all things. Because it has no substance, it can enter into where there is no space. Exercising by returning to itself, winning victories by remaining gentle and yielding, it is softer than anything, and therefore it overcomes everything hard. What does this tell you about the benefit of non-action and silence?

A person's approach to sexuality is a sign of his level of evolution. Unevolved persons practice ordinary sexual intercourse. Placing all emphasis upon the sexual organs, they neglect the body's other organs and systems. Whatever physical energy is accumulated is summarily discharged [through orgasm] , and the subtle energies are similarly dissipated and disordered. It is a great backward leap. For those who aspire to the higher realms of living, there is angelic dual cultivation [transmutation]. Because every portion of the body, mind, and spirit yearns for the integration of yin and yang, angelic intercourse is led by the spirit rather than the sexual organs. Where ordinary intercourse is effortful, angelic cultivation is calm, relaxed, quiet, and natural. Where ordinary intercourse unites sex organs with sex organs, angelic cultivation unites spirit with spirit, mind with mind, and every cell of one body with every cell of the other body. Culminating not in dissolution [orgasm] but in integration [sublimation], it is an opportunity for a man and woman to mutually transform and uplift each other into the realm of bliss and wholeness. The sacred ways of angelic intercourse are taught only by one who has himself achieved total energy integration, and taught only to students who follow the Integral Way with profound devotion, seeking to purify and pacify the entire world along with their own being. However, if your virtue is especially radiant, it can be possible to open a pathway to the subtle realm and receive these celestial teachings directly from the immortals.

The cords of passion and desire weave a binding net around you. Worldly confrontation makes you stiff and inflexible. The trap of duality is tenacious. Bound, rigid, and trapped, you cannot experience liberation. Through dual cultivation it is possible to unravel the net, soften the rigidity, dismantle the trap. Dissolving your yin energy into the source of universal life, attracting the yang energy from that same source, you leave behind individuality and your life becomes pure nature. Free of ego, living naturally, working virtuously, you become filled with inexhaustible vitality and are liberated forever from the cycle of death and rebirth. Understand this if nothing else: spiritual freedom and oneness with the Tao are not randomly bestowed gifts, but the rewards of conscious self-transformation and self-evolution.

The transformation toward eternal life is gradual. The heavy, gross energy of body, mind, and spirit must first be purified and uplifted. When the energy ascends to the subtle level, then self-mastery can be sought. A wise instructor teaches the powerful principles of self-integration only to those who have already achieved a high level of self-purification and self-mastery. In addition, all proper teaching follows the law of energy response: the most effective method is always that to which the student's natural energy most harmoniously responds. For one, celibacy and self-cultivation will be appropriate; for another, properly guided dual cultivation will derive the greatest benefit. A discerning teacher will determine the proper balance of practices for each individual. In any case, know that all teachers and techniques are only transitional: true realization comes from the direct merger of one's being with the divine energy of the Tao.