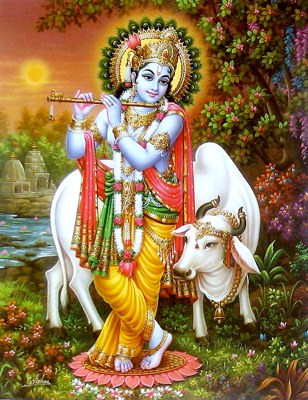 (Sanskrit कृष्ण) Literally, "black" or "dark blue." Krishna is a central figure in Indian (Hindu) spirituality. His life bears a remarkable similarity to that of Jesus of Nazareth. His most famous teaching is expressed in the Bhagavad-Gita. Krishna is an incarnation of Vishnu (in Kabbalah, the sephirah Chokmah), and is therefore a representation of Christ.

"When one studies the Gospel of Krishna the Hindu Christ, one is astonished upon discovering the same Gospel of Jesus. However, Krishna was born many centuries before Jesus. Devaki, the Hindu virgin, conceived Krishna by the action and grace of the Holy Spirit. The child-God Krishna was transported to the stable of Nanden and the gods and angels came to adore him. The life, passion, and death of Krishna are similar to that of Jesus." - Samael Aun Weor, The Revolution of the Dialectic

"The reason that Krishna is described as black or dark blue can be seen when you study the night sky. Christ is the origin of all life, it is the field upon which everything lives, blossoms, and grows. To us, the night sky is black, which is very odd when you consider that the sky, the universe, is filled with suns that irradiate enormous volumes of light. How could that huge quantity of light be black? It is illogical. If the universe is filled with glowing suns that are emitting immeasurable amounts of light, why would it be black? It is only black because we do not have the eyes to see that light. It is too bright; we are blind to it. We cannot see it. It is a level of luminosity that is beyond our vision; it is black to us. But, if we had the eyes that could see it, the universe would not be black. Krishna is called the 'Black God' in the same way that amongst the Egyptians Osiris is called a black God. His spouse is Nut, Isis, the Divine Mother, who is the sky filled with stars, that fundamental emptiness from which stars are born. Krishna / Christ is the light that emerges in the darkness. The darkness does not understand the light. Our mind, our perception, does not comprehend the light of Krishna / Christ. It is so bright at we only see black." - Krishna: the God of Love, Sex and Yoga