As a young prince, the Buddha was isolated. At his birth a prediction was made that this miraculous child would become one of two things: either the greatest king that the earth had ever known, or the greatest saint. Of course, his father was overjoyed, but didn't want his son to be a saint: he wanted him to be a king, like him. So, he isolated his son. He kept Gautama within the palaces and never allowed him to see suffering, illness, old age, or death. So, the story goes that as a young man, Prince Gautama never saw these things. He lived as a typical person until he was twenty-nine years of age. At this point, the Gods who had encouraged him to take birth, to teach the Dharma, to help suffering beings, had no choice but to intervene.

Feeling increasingly isolated and curious about the outside world, Gautama eventually received permission to tour the city. In advance of his arrival, the king had ordered the removal of all the old people, all the sick people, all the dying people, all the suffering people, so everybody that was left was young and happy. Gautama began his tour of the city, in this context, but the devas, the Gods, intervened, and showed themselves to Gautama as the sick, the old, the infirm, the dying. These are the first three of the “four encounters.”

Gautama was thunderstuck, shocked, by this first recognition that life is suffering. And he stated, it is recorded in the tradition:

What is the use of youth, which is ultimately destroyed by age?
What is the benefit of health, which will end only with illness?
What is the good of wisdom, in life, if this last not forever?
Aging, sickness and death follow each other inevitably.

Fortunately, the Gods intervene. The Gods will show us the truth of life, when one of our loved ones dies, when someone near us gets very sick, when we lose a child, or a loved one. The way we usually take these events is with a great deal of self-pity. We need to learn to emulate the example of the Buddha, to take these events as a stimulus for wisdom, as an opportunity to comprehend something about the nature of existence, to not waste it.

It is the fundamental state of ignorance – delusion – that maintains our mistaken view. It is clear that we do not comprehend the inevitable facts of illness, aging, and death. If we truly understood that we have only limited time in this body, would we continue to waste time in useless activities?  If we truly understood how illness arises due to karma, would we continue to create harmful actions, such as anger, pride, jealousy, and envy? If we fully comprehended the value of our own energies, would we continue to waste them in useless explosions of lust, anger and greed, thereby hastening the approach of death?

When the Buddha observed the suffering of humanity, what arose in him was a profound understanding of the futility of terrestrial life, materialistic life, the typical life, and accompanied with that came a sense of renunciation. It is said that he then saw a holy person. This is the fourth encounter. The holy person or yogi said that he had renounced materialistic life and given up all concern for worldly demands, in order to find the path to freedom from suffering.

It is at this moment that the Buddha sees his choice, and why this is the sixth event, which relates to this Sixth Arcanum, the moment in which we have to choose: do we remain attracted and identified with the illusions of the whore, Maya, all the materialistic pleasures of life, all of our passions, all of our lust? Or do we renounce that bestial path in order to find the truth-Maya, the Goddess, the Dharma, our own wisdom-mind? 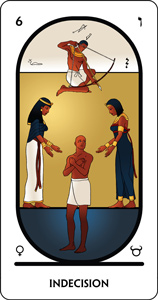