In Hebrew, the word Malkuth means "kingdom." In the Kabbalah, Malkuth is the tenth and lowest sphere of the Tree of Life, and corresponds to this physical world, within which we find the kingdoms of nature (mineral, plant, animal, and humanoid).

Naturally, a prince is a person who is able to enjoy all the benefits of his father's kingdom.  In the life story of the Buddha Shakyamuni, the prince lives a life of luxury, surrounded with pleasures and comforts, without the slightest indication that suffering exists. This environment is crafted by the ruler of the kingdom, who wishes for his son to be a great emperor of the world. All evidence of suffering, sickness, old age and death are kept away from the boy, in order to emphasize the illusion that life is wonderful and free of pain.

The kingdom (Malkuth) symbolizes both the material earth and the philosophical earth: our physical body. The "king of this world" - our inner Mara or Satan (our bestial mind) - intends for us to continue believing that this body is here simply for our enjoyment, and suffering will not happen to us. But of course, this is a lie.

The illusion of physical enjoyment is perpetuated through the five senses. Our attachment to sensory pleasure is symbolized in Five Objects of Desire (Tibetan: 'dod-yon sna-lnga, Sanskrit: panchakamaguna):

The sensations of life are received by us as impressions: vibrations of energy. Our transformation of energy determines the result; in other words, karma, the law of actions and consequence.

Classical Buddhism describes a person as a collection of aggregates: the Five Skandhas.

The first aggregate or heap or accumulation is called Form (Sanskrit: Rupa). It is traditionally taught that this is made up of four elements:  earth, water, fire, wind. In Gnosticism, we equate this skandha with the physical body (Malkuth, the kingdom). Clearly, the physical body is an accumulation or collection of various elements; it is interdependent, and only exists due to the causal relationship of its parts. The sensations of life enter into us through this collection of elements, through the portals of the senses.

The second aggregate (skandha) is traditionally called Sensation or Sensibility (Sanskrit: vedana). This skandha corresponds to the senses themselves, or in other words, the energetic basis for the sensory fields, which in Gnosticism we call the vital or ethereal body (Tibetan: subtle body, lus phra-mo). This aggregate of materials is a collection of four sheaths or ethers, and are the medium by which the sensations are reflected from the senses inwards towards the psyche.

The third aggregate is usually called Perception (Sanskrit: samjana). It is here that we begin to translate the sensation into a feeling of like or dislike. This skandha is equated with the lunar astral body (Sanskrit: kama rupa, the body of desire).

The fourth aggregate is Impression (Sanskrit: samskara). At this stage, the sensation has been fully transformed into a mental formation.  Therefore, this skandha is related to the lunar mental body.

Finally, we arrive at the fifth skandha: Consciousness (Sanskrit: vijnana). Unfortunately, our consciousness is asleep, and usually only perceives the sensations after the previous skandhas transform them into desires of craving or aversion. Thus our "conscious will" is fooled by the impressions of life that were translated by our own mind (the skandhas).

To control the senses and transform the impressions of sensual desire is the basic requirement of spiritual work: without it, the consciousness becomes entranced with the sensations of life, and we end being hypnotized, asleep.

This is the symbol of the prince living in his palace of pleasures: our consciousness (the Buddha-nature) is imprisoned in a world of illusions that we ourselves have crafted.

Being so isolated and pampered, the prince knew nothing about the realities of the outside world. In his mind, there is no suffering, no sickness, no aging, no death. Truly, we have the tendency to live as if none of these will occur to us or those we love. 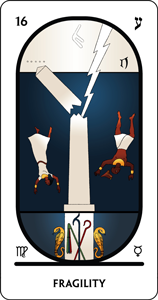 The time arrived for him to marry. While his age varies from story to story, most versions state that he was sixteen years of age. Referring to the Kabbalistic Tarot, the Arcanum Sixteen is the Fulminated Tower. This card represents the tendency to become identified with appearances and fall into the sleep of the consciousness. Here we find a symbol of how we fall under the spell of life, and become identified with material existence, making the assumption that this is all there is to life. Within this sleepy state, we grow, marry, have children, and die, all without realizing the purpose of our existence. This is the state of the world: a vast sea of sleepwalking beings who suffer and cry in ignorance. The Arcanum Sixteen indicates a state of spiritual failure, psychological sleep.

Even though many life stories of the Buddha paint a picture of him being enlightened from the beginning, there is no effect without a cause, therefore we know that he had to work very intensely in order to acquire his wisdom.  No Buddha has always been a Buddha. The work to become a Buddha is psychological: it is the work to free the mind from the cage of subjective formations. Therefore, the Buddha being "age sixteen" symbolizes that his mind was at that time a "fulminated tower" - the Arcanum Sixteen.  It is here that our work begins: we are all fallen into disgrace. Now we must become heroic, and restore our mind to it's pristine condition. To do that, we have to overcome our enemy: ourselves.

This is further emphasized in some versions of the story, where the Buddha's "cousin" Devadatta comes to make trouble. Devadatta is symbolic of the hero's antithesis: our own ego.

The parents of eligible princesses were in doubt about the virtues of Prince Siddhartha, considering that he must be a very lazy and immature boy. Therefore a contest of skills was arranged. But Devadatta, jealous of his cousin and determined to be the most impressive contestant, displayed his skill by killing an elephant with one blow of his hand.

Yet curiously, the name Devadatta literally means, "gift from God." How can he be a gift from God when he opposes the Buddha himself?

In the Judeo-Christian tradition, we find the same symbol embodied in Lucifer, which literally means "the bearer of Light." Lucifer tempts Christ.  Lucifer is the antithesis of Christ.  Devadatta is the antithesis of Buddha.  Devadatta-Lucifer is the power of the Spirit but trapped in materialism.  Devadatta-Lucifer symbolizes the Christic fire or light that has become trapped inside of the ego. The job of the spiritual hero is to free that light: that is the meaning of "liberation." 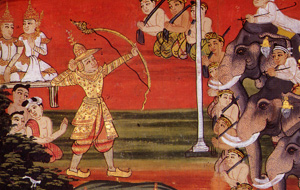 In spite of the efforts of Devadatta, the young prince Siddhartha astonished everyone with his skills, especially in his display of archery. As a result, he wins the hand of a lovely princess, Yashodhara, who also happens to be his cousin.

The marriage of Siddhartha and Yashodhara is symbolic on several levels.  Primarily, the union of man and woman is the root power of creation. Birth is a product of sex.  Therefore, to give birth to something new, there has to be a utilization of sexual energy.

The doorway to initiation exists in the union of husband and wife.  This is the basis of the Tantric mysteries, which have been radically excised from the exoteric forms of Buddhism. Nonetheless, it is a clear symbol that in order for the Buddha to begin his own perfection, he first needs a woman.

Yet, there are other levels of meaning, as well. Throughout Asian literature, archery is symbolic of the practice of concentration, from which true meditation become possible. The archery contest symbolizes the will of the practitioner to develop penetrating, accurate insight into the nature of any phenomenon. In the Kabbalah, this is defined as a profound interaction between two spheres: Tiphereth (conscious will) and Geburah (divine consciousness). In Sanskrit, these are Manas (Tiphereth), which means "mind," and Buddhi (Geburah), which means "intellect." Mythologically, Tiphereth is symbolized by the warrior (the archer, the Human Soul) and Geburah is the princess (the Divine Soul). The close relationship of these two is emphasized by them being represented as "cousins."

Thus, when the prince wins the princess as his bride due to his archery skill, this is symbolic of an initiatic accomplishment, spiritual development: the union of the Divine Soul and the Human Soul. This union is symbolic and occurs in levels.  The most basic union is the entrance into Samadhi (meditation). Samadhi occurs when our conscious will connects directly with our divine consciousness, without the interference of the ego.  In this moment, the consciousness escapes the cage of the subjective mind and is able to experience the ecstasies of the superior worlds.

For most of us, we have no idea about the realities that exist beyond the range of five senses. The young Buddha Shakyamuni represents to us in this stage of his life story how we can develop ourselves spiritually and thereby come to understand the true nature of existence. We are all victims of the Arcanum Sixteen, and have become entranced by the illusions of "the kingdom." By developing the power of true meditation ("archery") we can win the hand of our spouse: the consciousness within, the buddha-nature, which is the source of liberation. 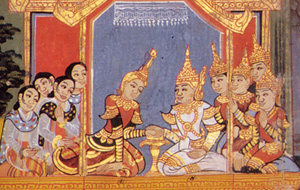 It is said that at the age of twenty-nine, the prince and his wife have a child. The Arcanum Twenty-nine is called Domesticity. This card represents the domestic life, the cycles of nature.

The child's name is Rahula. It is interesting that the name of the child means "chain" or "bondage," and this is often taken as a symbol of the burden of material life, that when you produce works in your material life, "a child" in other words, these material works become burdensome to the spiritual aspirant. And a child in this sense can represent projects, businesses, any kind of worldly pursuit. So, you may have a dream about a child, and that child could represent a worldly project, something materialistic, which can become a burden for you.  Rahula symbolizes the consequences (karma) of our actions. This is the Arcanum Five, and explains why this is the fifth great deed or stage of the Buddha's life.

The Arcanum Five is the Hierarch, and symbolizes the Law of Karma: the law of action and consequence. For in spite of his work to develop himself spiritually, he still had an ego and was still enjoying the pleasures of the kingdom: therefore, he acquired karmic consequences: Rahula.

Between the ages of sixteen and twenty-nine, the Buddha spends thirteen years in "the Kingdom." The Arcanum Thirteen is the card of Immortality, and always indicates that a great change is about to occur. The image of the card is that of a reaper: the bringer of death.