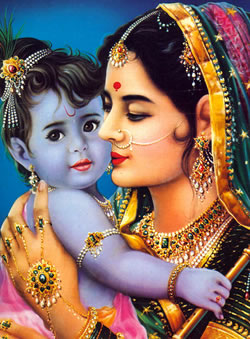 It is traditionally stated that shortly after his birth, either right after or seven days after, his mother died. This is symbolic. This is a symbolic gesture indicating that her initiatic work was complete: this is a mystical death. Thereafter, the child was raised by her sister Prajapati and nursemaids.

Then a renowned sage (sometimes called Asita or Krishna) arrived with his companions to see the new prince. King Shuddhodhana related the predictions others had made: that his son was to become a world-renowned king.

Observing on the boy the thirty-two signs of a Buddha, the sages felt intense faith and joy, and understood that when he was mature (in his thirties) he would teach the Dharma to humanity. The sages began to weep. Shuddhodhana, the boy's father, became very concerned. "Why are your eyes filled with tears? Do you see a negative sign?"

The sage replied, "Even if a rain of thunderbolts were to descend from the sky on this child, they could not harm a hair on his body. He is a great saint."

"So why are you crying?"

"Because we will not live long enough to hear the Dharma from his lips. We lament our lack of merit." Thereafter, the sages blessed the child and left.

Naturally, the boy's father was determined to see his son become a great king. The prince was given all the best: riches, luxury, protection, and education. He became an expert in astrology, literature and all the sciences. His days were filled with ease and luxury: suffering was nowhere to be seen.

This situation can be related to our own life. The king of this world wants us to carry on with the materialistic life: to become immersed in the pleasures of society, wealth, status, and more.  This is particularly true for those who live in relative prosperity, isolated from the poverty and suffering of the majority of humanity.  The king of this world - Satan - in intent on keeping us surrounded with pleasures so that we will not take up our true purpose: to awaken the consciousness and become a Buddha.

The present ‘human being' is still not a king or queen of Nature, but all are called to be kings or queens and priests and priestesses according to the Order of Melchizedeck (See the book of Hebrews in the Bible). - Samael Aun Weor

To be a King or Queen of Nature is to be what we were created to be: Buddhas, Devas, Angels. These beings command nature. As we are now, we have no command of nature, whether inside of us or outside. We are rather slaves of nature, victims of circumstances, mere insects tossed by the wind and waves.

The boy Shakyamuni, a Buddha in development, demonstrated his power over nature in many ways.

One day in a garden, the boy paused to rest under the shade of a tree. He sat calmly and spontaneously entered into a state of Samadhi. Some courtiers came upon him and were astonished at his state of meditation: but even more, they were shocked that the shadows of all the other trees in the garden had moved with the passage of the sun, but the shadow of his tree had remained where it was, in order to shade the Prince. 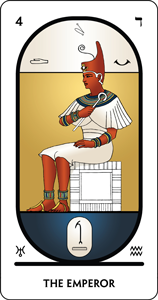 Arcanum Four of the Tarot - the Emperor - is directly concerned with the four elements of nature. A true Emperor commands the elements of nature.  But to command the external elements, he first has to command those that are within.  This is the lesson in this story: through meditation, the boy Shakyamuni demonstrates his command of his own mind: he is not identified with materialism, nor ego, and is thus serene and at peace.  In this way, the command of nature become easy for him.

It is said that King Shuddhodhana intensified his efforts to direct his son towards a worldly life. The prince was surrounded by dancing girls, musicians, games, and all manner of distraction. Yet, he controlled his mind: thus all he transformed all the impressions as they entered into him. The plays and musical performances, the games and songs, all become lessons on the true nature of existence. Instead of being identified with all the beauties of life, he heard in his mind:

Beings always ignore the way to renounce this helpless existence, and cycle through their lives like bees trapped in a bottle. The three worlds are as unstable as autumn clouds. The birth and death of beings are like watching a play. Being's lifespan is like a flash of lightning. It goes more swiftly than a mountain waterfall.

Therefore, he remained serene and in command of his own mind.

This is how the initiate transmutes all the elements of nature into understanding and wisdom. The transformation of the consciousness begins at the gateway of the senses.

When it is said that the boy prince was an expert in archery, science, music, and more, it is important for us to understand that the ease with which he mastered each skill was not due to a gift from heaven or any talent that belonged to him alone.  Everything is produced by causes and conditions.  By mastering his own mind, his natural intelligence functions with ease. When the mind is under control, at peace, the ego is not there to interfere.  Therefore, understanding the arts and sciences becomes natural, easy. It is the ego - pride, envy, jealousy, fear - that causes us to become confused, conflicted, misdirected, or ignorant.

True mastery of the arts demands mastery of our mind.  When the mind is at peace, serene, it perfectly reflects the entire universe. This is the greatest art of all.

Hear, ye children, the instruction of a father, and attend to know discernment. For I give you good instruction, forsake ye not my teaching.

For I was my father's son, tender and only beloved in the sight of my mother. He taught me also, and said unto me, Let thine heart retain my words: keep my commandments, and live.

Hear, O my son, and receive my sayings; and the years of thy life shall be many. I have taught thee in the way of wisdom; I have led thee in right paths. When thou goest, thy steps shall not be straitened; and when thou runnest, thou shalt not stumble. Take fast hold of discpline; let her not go: keep her; for she is thy life. Enter not into the path of the wicked, and go not in the way of evil men. Avoid it, pass not by it, turn from it, and pass away. For they sleep not, except they have done mischief; and their sleep is taken away, unless they cause some to fall. For they eat the bread of wickedness, and drink the wine of violence. But the path of the just is as the shining light, that shineth more and more unto the perfect day. The way of the wicked is as darkness: they know not at what they stumble.

My son, attend to my words; incline thine ear unto my sayings. Let them not depart from thine eyes; keep them in the midst of thine mind-heart.

For they are life unto those that find them, and health to all their flesh. Keep thy mind-heart with all diligence; for out of it are the issues of life. Put away from thee a froward mouth, and perverse lips put far from thee. Let thine eyes look forward, and let thine gaze look straight before thee. Ponder the path of thy feet, and let all thy ways be established. Turn not to the right hand nor to the left: remove thy foot from evil.