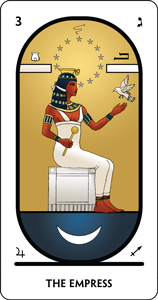 Many of the fundamental aspects of the Path are described in threes:

There are too many examples to list here! The point is that three factors create.

To reach any goal, you always need three factors.  One way to look at this is that the first factor is the intention or projective force towards that goal, the second factor opposes it (resistance), and the third conciliates them.

The most striking example is man and woman. As duality, they conflict; one is always trying to overcome the other. If you add sex to the equation, then there is a lot of energy: creation can occur. Balance can be established: but only if the energy is properly managed.

We can see the forces of these three factors clearly in the stages we have studied so far:

So in the Third Stage of the Buddha’s initiatic story, he is born.  This is symbolic of many things.

First, a Buddha is born of sex.  Not animal sex, but another kind of sex: a kind of sexuality that is beyond the ability of an animal.

Second, a Buddha is born of a pure, divine woman: the Goddess.  We each have our own inner Divine Mother, and she can give birth to our own inner Buddha, if we satisfy the requirements.  That is: the right factors need to be brought together.  If they are, then the Buddha can be gestated and born.

The Third Arcanum is the fecundated mother, ready to give birth to her sacred son.  She is Isis, Mary, Hera, Shakti: the mother of the Gods.

The story goes that while pregnant, Mahamaya (Sanskrit for “The Great Goddess”) wanted to go for a walk. So, with her entourage, she went into the Lumbini gardens and took a stroll. But as she approached a tree, she felt that moment that she was going to give birth. And in order to steady herself, she reached up with her right hand and grabbed the tree. And at that moment, the Buddha emerged from her right side. She gave birth through her side. This is, of course, a kabbalistic, initiatic symbol. 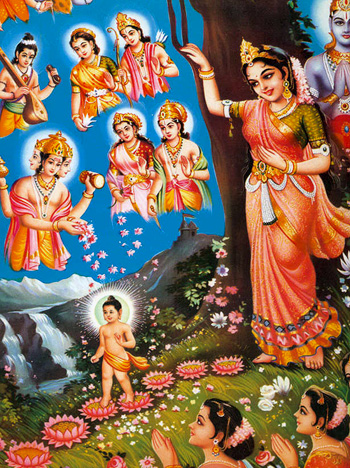 Traditionally, the tree is said to be a Plaksha tree (Ficus infectoria), which is a form of fig tree. In various Hindu scriptures, the Plaksha tree is associated with the Sarasvati river. Sarasvati is a name of the Divine Mother.  The Plaksha is a close relative of the Bodhi tree (Ficus religiosa), which we will encounter later in the story. But both trees are very important: they are both variations of fig tree, which are closely related with sexuality.

But his delight is in the law of the LORD; and in his law doth he meditate day and night. And he shall be like a tree planted by the rivers of water, that bringeth forth his fruit in his season; his leaf also shall not wither; and whatsoever he doeth shall prosper. The ungodly are not so: but are like the chaff which the wind driveth away. - Psalm 1:2-4

In other words, if we know and respect the laws of the consciousness, we can awaken and grow like a fig tree planted by the rivers of Sarasvati, the Divine Mother. But as the fig tree symbolizes, Right Action is rooted in sexuality.

The fig tree symbolizes the feminine sexual forces that we must learn how to control. - Samael Aun Weor, Igneous Rose

A good tree cannot bring forth evil fruit, neither can a corrupt tree bring forth good fruit.

Every tree that bringeth not forth good fruit is hewn down, and cast into the fire. - Matthew 7:17-19

Mahamaya steadies herself with her right hand, which symbolizes present action, right action: she knows how to control the forces of the fig tree: the sexual forces. Because of this, she is capable of being a channel for the arrival of the Buddha.  If she did not have this kind of control over her own sexual forces, she would not be able to receive and deliver the cosmic power of the Buddha.

In the Tarot, the Empress holds a wand of power in her right hand, which represents the same thing: power is in the Law of Three – which we all have, in accordance with our Level of Being – and if we use it well, then good things can come of it.  But if we abuse our power - the most powerful of which is sexual - then we acquire karma and suffering.

In this case, Mahamaya represents to us that by using our sexual power well (by relying on the awakened consciousness, the Tree of Life) the Buddha is born inside of us.

From her right side emerges this child, the Buddha. This relates very well to Adam and Eve. As you recall, Eve is pulled from the right side of Adam, and this is symbolic of how the soul unfolds and manifests, how the Tree of Life unfolds itself in levels in order to create existence.

Present at this birth were many of the Hindu Gods, such as Indra, Brahma, and many others. So, if you see paintings of the moment of birth, you will see Gods there assisting, receiving the child, bathing the child, holding parasols, and assisting the whole process. In Hindu tradition cleanliness is very important, and because there is blood and fluid accompanying a typical birth, it is said to be an unclean event, therefore the Gods are offended and will not come to such an event. In Gnosis we understand that, because the typical birth is really a result of fornication, so it is not an immaculate birth. But in the case of the Buddha - just like Jesus - this was a birth that was clean, because the conception was from chaste sexuality – without fornication, without orgasm - and that is why the Gods were there. The Gods were assisting, represented in the story, because of the cleanliness of the event, because it happened without fornication. In other words, it was an event of chastity: white tantra.

At this moment, many miracles that happened in the region. And because of all the miracles there was a great rain, which ended some troubles for the local people, and there were many other births in the region, many children, many animals were born. Therefore, his father named him Siddhartha, which means "accomplisher of aims," or "fulfiller of wishes" someone who accomplishes what they sat out to do, which in this case, is to serve all beings.

It is said that upon exiting the womb he placed his feet on the ground, raised his finger to the sky, and exclaimed, "Look to me!" And he walked seven steps. These seven steps are known to all the Masons in the world: for there are seven sacred steps to enter the temple.  The seven steps represent seven great initiatic works that must be accomplished in order for the Buddha to incarnate inside of the soul.  These seven steps are the Seven Initiations of Major Mysteries, which culminate in the completion of the creation of the solar vehicles, within which the Being - our inner Buddha - can perform his mission on earth.  Therefore, the Buddha takes these seven symbolic steps to demonstrate that he has accomplished this task, and others should so likewise.

He then exclaims, "I am the best in this world!" This is not pride: it is a statement of fact.  The Buddha that is waiting to be born in us is absolute happiness, absolute peace, absolute love - there is nothing in the world that is greater than our own inner Buddha.  But we have to work to give him a place to be born inside of us. As we are now, we are filthy with lust, pride, envy, and more.  We have to clean our psychological temple, then the Buddha will come to be born there.

There are many great Masters who were born of immaculate births. There is Buddha, Jupiter, Zeus, Apollo, Quetzalcoatl, Fuji, Lao-tse, Jesus, all born of virgins, all born of an Immaculate Conception. Their mothers were virgin: virgin before, during, and after the childbirth.

When the child is born, some sages, some educated priests, analyze the child and discover that this child has all of the esoteric symbols, or signs, in his physical constitution, that demonstrate that he is a Buddha. There are many such symbolic signs.

Whosoever studies the thirty-two capital signs of Buddhahood biologically will reach the conclusion that the secondary sexual characteristics of Buddha were really those of a Super-Man.  These secondary sexual characteristics of Buddha indicate, point to, a very intense sexual transmutation.  There can be no doubt that Buddha practiced Maithuna, Sexual Yoga, Sexual Magic, the Arcanum A.Z.F.  Buddha taught White Tantra (Sexual Magic); however, he taught these teachings in secrecy to his disciples.  Zen and Chan Buddhism teach Maithuna and couples practice this Sexual Yoga.  - Samael Aun Weor

According to a religious custom, newborn children were to be taken to the temples to pay homage to the Gods.  So the royal couple took their new son, and the Shakya clan warriors were so awestruck by the radiance of the child that they bowed: thus he earned his name the "sage of the Shakya" - Shakyamuni.

Upon arriving at the temple, the parents were to help the child pay homage to the Gods. But when the Buddha-child was about the step into the temple door, the statue of the tribal deity (the divine spirit of the clan) came to life, bowed to the Buddha's feet, and escorted him inside. When his right foot touched the temple floor, all the statues - Indra, Brahma, Surya, Vishnu, and more -  came to life and bowed before the Buddha.  The earth shook. At this incredible sight, the Buddha's father gave him another name: Devatideva: "God of Gods."