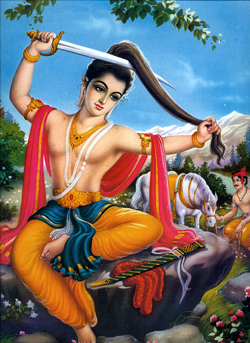 Having perceived that life leads to illness, suffering, and death, Shakyamuni was convinced that there must be a way to overcome them. He did not accept that all beings must suffer. He believed there is a way to remove suffering.

He saw a holy person, a monk, a renunciate, and decided to take the same path. So, out of compassion for all those who suffer, he abandoned his materialistic life. He rejected his heritage, his inheritance, his materialistic ties, and he went out into the wilderness in order to meditate.

This renunciation demonstrates that he conquered the ordeal of the Arcanum Six: the choice between the Virgin and Whore.  Shakyamuni chose the Virgin: the pristine, undefiled roots of the psyche. He rejected the Whore: the desires of the mind. This choice has to be made in action, and in the initiatic path it is firmly made through the creation of the Solar Bodies.  Therefore, a true renunciate has totally renounced all his ties with black magic: the causes of suffering.  Without Solar Bodies, this is not possible. (See: The Seven Words)

...we have to inevitably descend into the Abyss in order to definitively cut off all relationships, all roots, all ties with the creatures of evil. - Samael Aun Weor

This event is usually symbolized by the Buddha cutting off his hair and throwing it to the sky. This step is honored by all the monks and nuns of his traditions, who shave their heads. The cutting of the hair symbolizes cutting all ties to materialism. The sword is a symbol of willpower.

When he cut his hair, he is usually symbolized as taking that lock and throwing it up into the sky, and the God Indra takes it. And this is a symbol of renunciation, to give up everything to God.

Lay not up for yourselves treasures upon earth, where moth and rust doth corrupt, and where thieves break through and steal: But lay up for yourselves treasures in heaven, where neither moth nor rust doth corrupt, and where thieves do not break through nor steal: For where your treasure is, there will your heart be also. – Matthew 6:19-21

But there is a deeper symbol.  In the internal worlds, the length of one’s hair represents the depth of one’s chastity.  Thus, Gautama cutting his hair indicates the perfection of sexual transmutation: the complete sublimation of the sacred sexual energy.

On an even deeper level, this event symbolizes the entrance into the Direct Path: the Path of the Bodhisattva. Motivated by strong compassion for the suffering of others, and impelled by a strong sense of renunciation, the Bodhisattva places all of his longings, all of his possessions, all of himself, into the hands of his Innermost.

The Seventh Arcanum is Triumph, the chariot in which the Innermost, the Contemplation Buddha, commands his vehicle: the Bodhisattva or Manifestation Buddha. So, in stage number seven, when Gautama renounces the world, he throws his hair up to Heaven, he takes on that challenge, to fulfill the duty of his own Contemplation Buddha, which is to sacrifice himself, to teach the Dharma on behalf of all suffering beings. 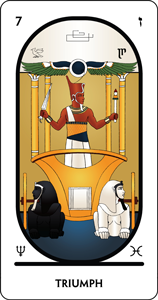 In other words, through his earlier efforts, working by the side of his wife, he created the chariot: the bodies of the soul (symbolized by the columns). Now, with his commitment to renounce all self-interest, he fulfills the Arcanum 7 and becomes the chariot, the vehicle, through which the Contemplation Buddha (the warrior in the chariot) can express himself on behalf of others.  But to successfully do that, the Bodhisattva has to be perfected.  It is one thing to make the chariot, and quite another to perfect it.

In Buddhism, the process of perfecting the Bodhisattva is represented by the bhumis or bodhisattva levels, through which the practitioner completely removes all delusion from the mind through an intensive process of self-purification. The goal is the perfection of Bodhichitta or the awakened mind of compassionate insight, a specific form of discriminative awareness that perceives directly the true nature of reality.

In the Madhayamakavatara of Chandrakirti (600-650 AD), a seven-point analysis of the self is presented, with the aggregates represented by a chariot, and the self symbolized by the driver. So long as the Bodhisattva is deluded by the illusion of the “I,” he remains imperfect. Thus, the “I” must be subjected to the seven-point meditative analysis, which states that the "I" - the self - (the chariot) does not have an independent existence because:

This seven-point training is a practice of meditative analysis of the “I” – when each separate “I” or ego is fully understood, it can then be destroyed. In this way, as the false "I" is removed, the true nature of the Being is revealed. In the tarot card, the warrior (Atman, Chesed, the Contemplation Buddha) holds aloft the sword of Manjushri: the discriminating wisdom of prajna that perceives the illuminating Void and thus cuts through all delusion.

Perceiving that both “I” and “mine” are void,
The yogi will be set utterly free. – Chandrakirti

Thus, having renounced his ties to all that creates suffering, Shakyamuni endeavored to enter into meditation to destroy the delusions and karmic conditions that remained in his mind-stream, thereby to become a fit chariot: empty, open, and receptive to the commands of the warrior, the true Self, the inner Buddha.