What are the Three Brains and Five Centers? 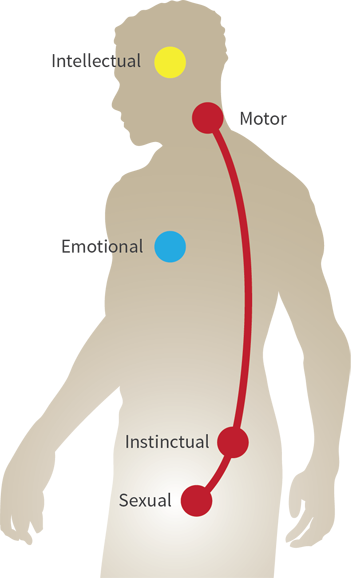 These are not "physical brains" or physical matter. Rather, they are psychological divisions of organized activity. Each brain functions and operates independent of the others, and each one has a host of jobs and duties that only it can accomplish.

When analyzed in more detail, the third brain is understood as having three distinct functions. Thus, the three brains can also be called the five centers:

Each brain or center is a machine that utilizes and transforms specific types of energy. When utilized consciously and intelligently, they harmonize and elevate the human being. Yet, when abused or misused, great disequilibrium, suffering, illness, and even death can result.

"In general, all sicknesses are the outcome of the wrong use of the three brains." —Samael Aun Weor, Tarot and Kabbalah

There are two additional centers that are activated when awakening consciousness:

These two can only express themselves through the authentic astral solar body and the legitimate mental solar body [Samael Aun Weor, The Perfect Matrimony].

(Some people believe the concept of the three brains was original to the teacher Gurdjieff, yet he himself stated that he received the teaching from others, significantly hinting that much of what he taught can be traced to Tibet, albeit through his complex layering of veils. In fact, since the three brains are a function of nature, no teacher "invented" the concept: every mystical tradition has information about our psychological and physiological processes, no matter which names or terms they utilize. It is foolish to argue over who said what first: what matters is to change.)

Quotes about the Three Brains

"A perfect equilibrium between personality and Essence, the harmonious development of thought, emotion, and movement, and a revolutionary ethics are what constitute the basis of a fundamental education." —Samael Aun Weor, Fundamentals of Gnostic Education

"In the staged arts of long ago, the individual would receive information in his three brains: motor, emotional, and intellectual.  In the schools of today however, only the intellectual brain receives information. Neurosis and the sick states of the mind are due to this. Mental disequilibrium is avoided by balancing the three brains." —Samael Aun Weor, Tarot and Kabbalah

"Perfect mental equilibrium is of vital importance for those who want spiritual progress.  Almost all the aspirants of esotericism easily lose their mental equilibrium and usually fall into the most absurd things.  Whosoever yearns for direct knowledge must ensure that their minds are in perfect equilibrium." —Samael Aun Weor, The Perfect Matrimony

Learn more about the Three Brains