What are the Seven Chakras and Churches?

A chakra is merely a place where energy is moved from one place to another. There are many such places in the body, but in relation with spirituality and consciousness, there are fundamental areas, illustrated here. Properly defined, when a chakra has been developed to a higher degree, it is then called a “church.” 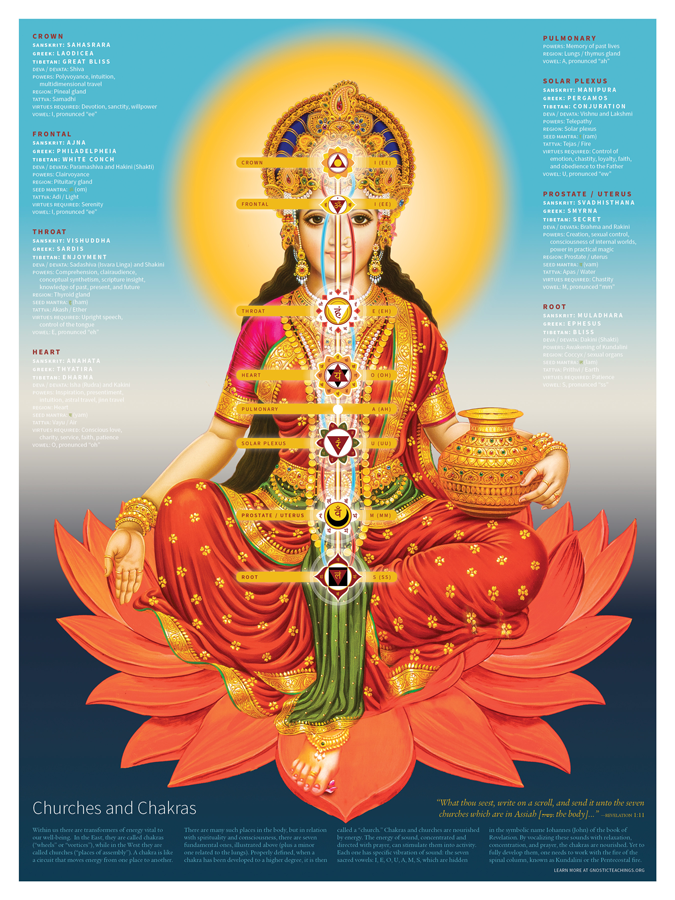 “The chakras in common and ordinary people are only the senses of their animal soul [nephesh]. Their chakras are intimately related with the psychic-biological functions of their human organism. “The tattvas [subtle vibrations] enter through the chakras and then into our endocrine glands; the endocrine glands then transform the tattvas into hormones. So, the Astral chakras are the gates of entry for the tattvas. However when the Astral body is Christified by means of the third degree of the power of fire, then the seven chakras are transformed into the seven churches to which the Book of Revelation (Apocalypse) refers... “Without the third degree of the power of the fire, the chakras are just senses of the animal soul [nephesh]. Therefore, whosoever is only concerned with the development of the chakras, without working for their Christification, transforms themselves into black magicians.” —Samael Aun Weor, The Seven Words

Chakras are nourished by energy. The energy of sound, concentrated and directed with prayer, can stimulate them into activity. Thus, there is a specific vibration of sound for each chakra. Those are the seven sacred vowels: I, E, O, U, A, M, S, which are hidden in the symbolic name Iohannes (John) of the book of Revelation. By vocalizing these sounds with relaxation, concentration, and prayer, the chakras are nourished. Yet to fully develop them, one needs to work with the fire of the spinal column, known as Kundalini or the Pentecostal fire. To learn more, read The Perfect Matrimony by Samael Aun Weor.

The seven churches of the spinal medulla are united to the seven chakras or plexus of the Grand Sympathetic Nervous System by means of very fine nerves.

The seven churches are similar to lotus flowers which are suspended from the famous Nadi Chitra.  The canal of Shushumna is within the medullar canal.  The canal of Nadi Chitra is within this canal of Shushumna.  The seven beautiful and divine churches are suspended from this precious medullar canal. —Samael Aun Weor, The Aquarian Message

Each one of the chakras located along the spinal medulla awakens as the Kundalini is ascending within the Nadi Chitra.

These seven chakras are located along the spinal medulla.

When the Kundalini is still enclosed within the Muladhara Chakra, then these seven chakras are just hanging down. However when Devi Kundalini ascends throughout the Brahmanadi, then the marvelous petals of these chakras turn upward to Brahmarandhra, thus marvelously gleaming with the incomparable sexual fire of Kundalini . —Samael Aun Weor, Kundalini Yoga: The Mysteries of the Fire

Essential Relationships of the Chakras

The Aquarian Message
Kundalini Yoga: The Mysteries of the Fire
The Perfect Matrimony

The Transformation of Energy
The Book of Revelation