What are the Root Races and Subraces?

The following is an outline for reference while studying the history of the humanities that have lived upon this planet. Regarding the veracity of the following information, we remind the reader of what Blavatsky pointed observed:

"In our own day we witness the stupendous fact that such comparatively recent personages as Shakespeare and William Tell are all but denied, an attempt being made to show one to be a nom de plume, and the other a person who never existed. What wonder then, that the two powerful races -- the Lemurians and the Atlanteans -- have been merged into and identified, in time, with a few half mythical peoples, who all bore the same patronymic?" - The Secret Doctrine

Therefore, let us remember that our "official" history is no more a series of facts than the daily newspaper: and we know that the newspaper is nothing but manipulated opinions.

Creation unfolds as a series of epochs. For each epoch there is a day and a night.

During your life, you experience day and night. Similarly, from a higher point of view, your entire life is one day: death is the entrance into night. After night passes, a new day arrives: a new existence. The same is true of the worlds.  And the scalable view also applies: for a planet has its days and night, and its lives...

Related to this humanity, there are have been many days and nights. We are now in the middle of a Great Cosmic Day (Sanskrit: Mahamanvantara). We are in the fourth day, or fourth manvantara (period of time) or epoch. There are seven cycles or rounds within each day.

But within this fourth round, there are smaller measurements to be made. For this current humanity is the fifth Root Race to exist on this Earth. There have been other races, but only traces of them remain.  Traces on Easter Island, in Egypt, in Mexico... 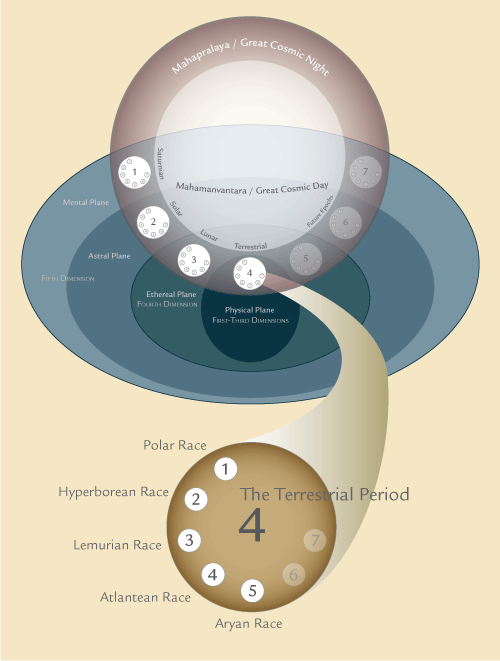 Root Races of the Fourth Terrestrial Round

The first Root Race of this terrestrial humanity.

"The Aztecs state that the human beings of the first Root Race were extraordinary, dark-colored giants. This was a very civilized, androgynous, asexual, semi-physical, semi-ethereal Root Race. Their individuals could reduce their height to the size of an average person of this present Aryan Root Race. Their rituals as well as their wisdom were portentous. Barbarism did not exist in their epoch; this Root Race was devoured by the Tigers of Wisdom. The regent of the first Root Race was the God Tezcatlipoca. Each individual was a Master of Wisdom. Their reproduction system was effectuated by means of the fissiparous act; this is a system similar to that which organic cells use for reproduction, which is the process of cellular division. This is how the organism of the father-mother was divided into two, and the androgynous child was fastened to the father-mother for awhile. The first Root Race lived on the Sacred Island situated in the north polar cap. That island still exists, yet it is in a Jinn state within the fourth vertical." - Samael Aun Weor, The Kabbalah of the Mayan Mysteries

A nation mentioned in Greek mythology. The name means “beyond the North Wind,” thus they are supposed to have been somewhere north of Greece, but the name also means “beyond the mountains” and “those who carry (merchandise) across.” Apollo was said to spend the winter months among them, and his mother Leto was presumed to have been born in their land. Perseus went there searching for the Gorgon, and Heracles chased the Cerynitian hind to their country. The writer Pindar represented them as a blessed people untouched by human afflictions. H. P. Blavatsky places their country around the North Pole, saying it was “The Land of the Eternal Sun,” beyond Boreas, the God of Winter. She asserts that this land was of a near tropical climate. In Universal Gnosticism, they are known to be the Second Root Race of this Terrestrial Humanity.

The second Root Race was governed by Quetzalcoatl; this was the Hyperborean humanity. The degenerated people of the second Root Race converted themselves into monkeys; these are the ancestors of present monkeys. They reproduced themselves by budding, such as the plants do: from their trunk sprout many branches. They were wiped out by strong hurricanes. - Samael Aun Weor, The Kabbalah of the Mayan Mysteries

The third Root Race was the Lemurian race, which inhabited Mu, which today is the Pacific Ocean.  They perished by fire raining from the sun (volcanoes and earthquakes). This Root Race was governed by the Aztec God Tlaloc.  Their reproduction was by means of gemmation.  Lemuria was a very extensive continent.  The Lemurians who degenerated had, afterwards, faces similar to birds; this is why some savages, when remembering tradition, adorned their heads with feathers. - Samael Aun Weor, The Kabbalah of the Mayan Mysteries

The Atlanteans, who had bodies which were three meters in stature, created a very powerful civilization.  The Atlantean continent was immense; it extended from the south to the north, from the Austral region to the Septentrional. This Atlantean Root Race had its four seasons, or ages.

During their spring or Golden Age, borders and passports were unnecessary.  Frontiers did not exist, and everywhere there was love among humanity.  Innocence reigned upon the face of the earth.  One who knew how to play the lyre could shake the universe with its melodies.  At that time, the lyre had yet to be smashed into pieces by falling upon the floor of the temple.  This was because the Solar Dynasties were still governing.

As the Age of Silver arrived, everything from the Golden Age diminished.  However, human beings were still in communication with the ineffable beings who are known in Christianity as Angels, Archangels, Principates, Thrones, etc.

When the Age of Copper arrived, the radiant splendors of the Golden and Silver Ages became dark.  The same splendors of the past did not exist.  People started to establish frontiers, wars were begun, hatred was born, as well as selfishness, envy, greed, etc.

The Atlanteans had degenerated a great deal and had now started using their awesome powers for evil and anthropophagi.  Their magical science became black and with these changes came horrible devices. The Atlanteans could now create a mental monster that could crystallize into existence through their willpower.  This monster needed blood as food to stay alive.

The last days of Atlantis were both frightening and apocalyptic.  Their beautiful cities were destroyed by their atomic wars, and finally the solar system had completed its voyage around the zodiacal belt.  When this happened, there was a great disturbance in the axis of the earth.  The oceans were completely displaced through the changing of their beds.

The cold points of the Earth that we refer to as the poles were converted into the Equator, and the Equator into the poles.  Millions of people perished and all of the powerful cities of Atlantis submerged within the ocean that now bears its name. - Samael Aun Weor, The Aquarian Message

Quoted from Webster’s Revised Unabridged Dictionary: “From Sanskrit [=a]rya excellent, honorable; akin to the name of the country Iran, and perh. to Erin, Ireland, and the early name of this people, at least in Asia. 1. One of a primitive people supposed to have lived in prehistoric times, in Central Asia, east of the Caspian Sea, and north of the Hindoo Koosh and Paropamisan Mountains, and to have been the stock from which sprang the Hindoo, Persian, Greek, Latin, Celtic, Teutonic, Slavonic, and other races; one of that ethnological division of mankind called also Indo-European or Indo-Germanic.”

In esotericism, this term "Aryan Race" refers to the vast majority of the popluation of this planet, and is noted for its close relationship with Ares or Mars, the God of War. The Aryan race, the fifth great race to exist on this planet, is under the guidance of Ares, Mars, the Fifth of the "Seven Spirits before the Throne of God." The Aryans are not limited to blonde-haired white-skinned people, but include almost all the people on the planet.

Through the course of its development, the Aryan race has had seven subraces. These are also not based on skin-color. The seven subraces only indicate times and regions where the conscious circle of humanity was focused on activity for the benefit of humanity, such as the development of something new or necessary. Obviously, there is always activity elsewhere in the world, and amongst all people, regardless of color, culture, or religion. So for instance, right now during the seventh subrace, the primary new development is happening in North America, but there continues to be great activity worldwide, and all of it is concerned with all people, not just North Americans. 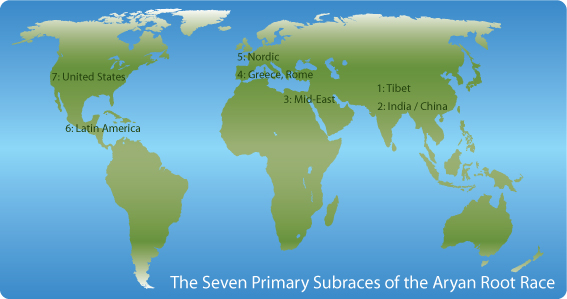 Every Root Race has seven Subraces. The seed of our Aryan Root Race is Nordic, but when the Nordics mixed themselves with the Atlantean survivors, they gave origin onto the Subraces of the Aryan trunk.

First Subrace: It flourished in central Asia, in those now vanished kingdoms of central Asia, and whose ruins still exist in the Himalayas around the country of Tibet. Powerful spiritual civilizations of the first Aryan Subrace existed in those regions.

Second Subrace: It flourished in India and the entire south of Asia. In Pearland, the sacred land of the Vedas, in the ancient Hindustan, where the second Aryan Subrace developed, formidable esoteric cultures and tremendous civilizations existed.

Fourth Subrace: It developed in Rome, Greece, Italy, and Athens, the great city founded by the Goddess Athena. Before their degeneration and destruction, Greece and Italy were marvelous scenarios where the powerful civilizations of the fourth Aryan Subrace developed.

Fifth Subrace: Are the Anglo-Saxon and Teutonic. The First and Second World Wars, with all of their barbarism and moral corruption, point with their accusatory fingers to the men and women of the fifth Aryan Subrace.

Sixth Subrace: The mixture of the Spanish Conquistadors with the Native-American tribes. The effort to form the sixth Subrace in the redskin territory was very difficult, because the English Conquistadors destroyed them; they assassinated them, instead of mixing themselves with the natives. Only in a very insignificant and incipient way was the mixture of blood performed. This is why the Occult Fraternity saw the necessity of converting the North American territory into a melting crucible of races. So, the formation of the sixth Subrace in the United States had enormous difficulties; there, all the races of the world have mixed. The sixth Subrace in Latin America was formed very easily and this is something that must not be ignored by the treatisers of anthropogenesis and occultism.

Seventh Subrace: The survivors of the new great cataclysm that soon will destroy this Aryan Root Race will be formed by the survivors of the Seventh Subrace; they still do not exist, but they will. So, this Aryan Root Race, instead of evolving, has devolved, and its corruption is now worse than that of the Atlanteans in their epoch. Its wickedness is so great that it has reached unto heaven. - Samael Aun Weor, The Kabbalah of the Mayan Mysteries