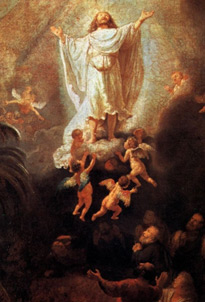 In the Ascension of the Lord, our Astral Body becomes liberated from the abyss and ascends within the luminous aura of our Father, who is in Heaven.

As if descending from the blue of infinity, Sanat Kumara (in whose name all Initiations are received) appears radiantly upon the holy Altar when the Inner Master kneeling before the sacred Altar of the Third Initiation of Greater Mysteries receives his Initiation.

The sublime presence of this Ancient of the Days is indescribable.

His grey hair (that seems to have never been touched by scissors) falls over his shoulders. His white beard and majestic face reveal to us the likeness of God.

Sanat Kumara with his semi-nude body, holding a staff with his hand, resembles an Adamite.

Sanat Kumara is the outcome of millenary purifications.

The Third Initiation of Greater Mysteries is received by the Inner Master within the superior worlds of consciousness, and he attends his Initiation without material bodies of any kind.

This ancient doctrine of Initiatic Resurrection was known by all the Gnostic sects of olden times, by all the initiatic societies of the past: Nazarenes, Peratae, Pythagoreans, etc. The Resurrection was cultivated in the mysteries of Egypt, Greece, Rome, Babylon, Syria, India, Mexico, Peru, Troy, Carthage, etc.

The Wisdom of Sex is the foundation of every authentic school of mysteries. This is the Lingam-Yoni of the Greek Mysteries.

By means of Sexual Magic and perfect sanctity, everyone can become a Master of Greater Mysteries of the great, universal White Fraternity.

The scientific process of Ascension produces in the body of the Initiate a process of biological transformation, whose symptoms express themselves in the form of decline or organic weakness, especially when the hour of dusk arrives.

However, that does not mean illness or organic weakness as such, but simply, fleeting phenomena, which are the outcome of the transformation of the Astral Body during those forty days of the Ascension of the Lord.

It is logical that every transformation of the Astral Body originates a similar transformation in the catalytic cellular processes, and in the electro-biological mechanism of our endocrine glands, which like marvelous laboratories transform the Tattwas into different biochemical substances, whose most diverse combinations, in the end, define themselves as hormones.

The Astral Body has its seat in the liver. If we examine the word “higado” [Editor’s note: the Spanish word for liver], we see that it has three letters: I, A, O. Diodorus stated in one of his verses: “Know that among all the Gods, the most elevated is IAO. Hades is in the winter. Zeus begins in spring, Helios in summer, and in autumn, IAO enters into activity, working constantly. IAO is Jovis-Pater; he is Jupiter, who is unjustly called Javhe by the Jews. IAO offers the substantial Wine of Life, while Jupiter is a slave of the Sun.” (Page 97, The Gnostic Church, by Huiracocha, fourth edition.)

It is necessary to detach the Astral Body from the infernos of the human being.

Just as the roots of trees absorb their life from the clay of the earth in order to transform it into nutritional sap, which spreads through all the veins and cells of the tree, likewise our intestinal roots wisely extract from food, the most diverse vital principles, to nourish with them, the marvelous tree of our own organic biology.

Just as the clay of the earth is found at the profound seat of the roots of the trees, likewise in the profound seats of our lower abdomen and of our liver (like strata, spheres or submerged worlds constituted by the atoms of the secret enemy) the infernos of the human being are found.

During these forty days of the Ascension of the Lord, the Creative Hierarchies have to detach our Astral Body from these infernos of the human being, where we experience again and recapitulate all the tenebrous scenes of the past.

That recapitulation begins after the Resurrection of our Chrestos.

This recapitulative process is initiated beginning with the most tenebrous submerged sphere of the Universe, which is bloody red in color, and in whose horrible abysses live all the monsters and evils of the world.

Thereafter, by recapitulating all our tenebrous scenes, we ascend little by little through different strata, regions or planes of the atoms of the secret enemy.

Nineteen days after the Resurrection of our Chrestos, a certain layer of atomic substance of the Astral counterpart of our abdomen is torn away by the Hierarchies.

Such a layer, similar to the skin of our human organism, is like the door to the infernos of the human being, formed by the atoms of the secret enemy.

This closed door keeps the Human Soul prisoner within the abysses of evil.

Once this thick atomic layer of the Astral counterpart of our abdomen is removed, the Masters then have to medicate this zone of our abdomen.

Naturally, all these diverse transformations of our Astral Body inevitably have repercussions upon our inner organic biology, originating symptoms of fleeting organic weakness and sporadic manifestations of hunger in the Physical Body of the Master.

If we break up the number nineteen in the following manner: 1 + 9, it gives us the sum of ten.

Now then, the entire progress of the devotee of the Path is based on the numbers 1 + 2 + 3 + 4 = 10. Now my disciples will understand why it is that in precisely nineteen days, the atomic door that keeps the Astral Body prisoner within the infernos of man should be torn away.

Naturally, we will explain to our disciples that the state of imprisonment to which we refer, is only referring to the vital essence of our Astral Body; in other words, to the very roots of our marvelous Astral vehicle, enclosed within the profundities of the abyss; these roots are the submerged essence of the very roots of our organic tree. These are the infernos of the human being, from which our Astral Body must be detached. Thus, this is why the entire progress of the student is based on the number ten. The ten Sephiroth of Kabbalah are based on the number ten. These ten Sephiroth are the following:

These ten Sephiroth live, evolve and progress within the consciousness. The Human Being is the same Sephirothic tree. It is very interesting that man has ten fingers on his hands, and that the Decalogue is made up of Ten Commandments. Now the devotee of the path will comprehend the importance of the number ten. Now my disciples will understand why nineteen days after the Resurrection of our own Chrestos the atomic door is torn away by the Masters from the infernos of the human being.

When Paul of Tarsus wrote his Epistle to the Philippians, he still did not attain the Resurrection. Let us look at the following verses, which will prove my affirmation:

But what things were gain to me, those I counted loss for Christ.

Yea doubtless, and I count all things but loss for the Excellency of the knowledge of Christ Jesus my Lord: for whom I have suffered the loss of all things, and do count them but dung, that I may win Christ.

That I may know him, and the power of his Resurrection, and the fellowships of his sufferings, being made comfortable unto his death.

If by any means I might attain unto the Resurrection of the dead (Third Initiation of Greater Mysteries).

Not as though I had already attained, either were already perfect: but If follow after, if that I may apprehend that for which also I am apprehended of Christ Jesus.

I press towards the mark for the prize of the high calling of God in Christ Jesus. - Philippians 3:7-14

Nevertheless, Paul has already achieved the Resurrection and is presently incarnated once again; he is Master Hilarion, author of the book, Light on the Path.

This is the doctrine of the First Fathers of the Gnostic-Catholic Church. To this doctrine belonged Basilides, Saturnius of Antioch, Simon Magus, Carpocrates, founder of various convents in Spain, Marcion of Pontus, Saint Thomas, Valentinus, St. Augustine, Tertulian, St. Ambrose, Ireneaus, Hyppolitus, Epiphanius, Clement of Alexandria, Marcus, Cerdo, Empedocles, St. Jerome, etc. This is the ancient doctrine of the Nazarenes, of the Sethians, the Peratae, the Valentinians, the Justinians, etc. This is the ancient doctrine which was known in all the ancient schools of mysteries, and which Christ taught in secrecy to his seventy disciples. This is the secret science that I, Samael Aun Weor, am diffusing publicly to initiate the Age of Aquarius. This is the secret doctrine of our Divine Savior; all this Gnostic Wisdom is enclosed within The Pistis Sophia.

The book Pistis Sophia consists of four parts; the first and fourth parts do not have a title, but the second part of this book has a title that reads: “Part of the volumes of the Savior,” and at the beginning of the second book the following inscription is found: “Second book of the Pistis Sophia.” This refers to the greatest book of all the Gnostic doctrines, which was published in Latin in the year 1851 by Schwartz and Petermann, according to a Codex of the London Museum entitled Askeniean (whose age is dated back to the third century, although some believe that it is of the fifth century, Opus Onosticum Valentinus Adjuticatum est codice manuscripto Coptico Londinense descripsit et latine vertit M. G Schwartze. version of The Gnostic Church by Krumm-Heller, page 12, Fourth Edition).

Therefore, the esoteric doctrine of the Resurrection, as we are teaching it here, is enclosed in the one hundred forty-eight chapters of The Pistis Sophia, and in the profound esoteric wisdom of the Holy Bible.

It is a pity that Master Blavatsky did not find the Gnostic treasures.

The doctrine of the Holy Gnostic Church is the Wisdom of our Lord Jesus Christ.