We knew a man named John. He was an excellent theurgist! He knew how to consciously travel in his “Astral Body.”

The white dove, taking the shape of a sublime human figure, filled with love, spoke: “My son, you are not doing well!”

Surprised, John asked again: “Lord, tell me, why am I not doing well?”

And the Holy Spirit declared: “I am healing one of your patients, an ill woman who is your responsibility. Thus, you are not the one healing her. I am the one doing it, and yet you have charged her money! That money you received should be returned. It was given to you with much sacrifice on her part!”

In consternation, John answered: “Lord, if I return that money, will I then be on the right path?”

The venerable elder affirmed: “Yes, then you will be doing well, very well!”

John embraced his venerable elder, enraptured in an immense love. The elder blessed John and left. The theurgist knew that this was his own Holy Spirit! He knew that this was Binah, the Third Logos. Undoubtedly, every human has his white and ineffable dove.

The Logos is the Perfect Multiple Unity.

And the Holy Spirit is the Third Logos.

The prodigious force of the Third Logos flows in the entire Universe.

We have been created by the Third Logos!

Liberation of the Energy of the Third Logos

The human being must liberate the energy of the Third Logos from within his obscure animal depths and make it return “inward and upward,” transformed into a torrent of liquid fire.

The Kundalini ascends through the central canal of the spinal medulla until it reaches the top of the head. This is the creative energy of the Third Logos!

This is how John hovered within that second mediator principle known by Kabbalists as Chokmah, which is the Second Logos, the Perfect Multiple Unity.

Experience within the Venustic Initiation

The Baptist was dressed in his priestly robes. He opened up a type of tabernacle, within which he had two sacred cups: one of oil and the other of wine. The Baptist took out a jar of olive oil and ordered John (transmuted into Jesus) to enter the sanctuary. Once inside, the Baptist anointed John (transmuted into Jesus) with pure oil and sprinkled water on his head. At that precise moment, the shining Dragon of Wisdom, the Internal Christ, entered Jesus (who was John) precisely through the pineal gland located on the upper part of his head. At that moment, the Sun of the Father (the First Logos), the Sun of the Son (the Second Logos), and the Sun of the Holy Spirit (the Third Logos) glowed in the infinite space!

That marvelous “Seity,” that Internal Christ, glowed with immense and absolute whiteness within the internal vehicles of Jesus. Thereafter, the Priest ordered Jesus to sit on a special chair; thus, from that moment on, Jesus was called Jesus Christ! When John returned from such a state of profound ecstasy, he comprehended that in the world of the Second Logos (the World of the Christ), individuality, personality, and the “I” do not exist. Within the World of the Lord, we are all absolutely one!

The world of the Second Logos is the central sun.

The Ancient of Days: The First Logos

On another profound and silent night, John (by taking advantage of that transitory moment between vigil and sleep) arose from his bed and the outcome of this action was the conscious projection of John within his Astral Body; thus, he moved joyfully and happily. Suddenly he felt attracted towards the South Pole, towards the continent of Antarctica. John, floating deliciously within the astral plane, arrived at the glacial regions of the South Pole. When the theurgist raised his eyes to the infinite, he saw a Star shining, filled with glory. That Star sparkled marvelously. Within his consciousness, John felt that this Star was calling him, thus he soared through outer space and reached it, and behold the Star was the Ancient of the Days, the Father who is in secret, his own venerable Old Man!

Indeed, within the depths of our consciousness, each of us has a venerable Old Man; he is the First Logos. The Kabbalists call him Kether, the Goodness of Goodness.

The Old Man entered the Soul of John, and the latter felt his Self transfigured. Thus, he saw himself surrounded by an immense aura which encircled the entire planetary globe. The theurgist walked; he was inebriated with a type of happiness impossible to describe with words.

When John returned to his physical body, he comprehended that in the World of the First Logos, individuality and personality do not exist, nor any type of superior or inferior “I.”

John had read that the Trinity within the Unity forms the Holy Four, the Tetragrammaton. However, in spite of having read it, he had not fully comprehended it. With his understanding he had only penetrated within the meaning of the Trinity, but something else was missing; he wanted to integrate the Holy Four into his comprehension! 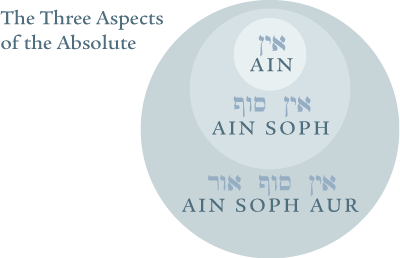 On another night, John discarded every desire, every thought, every will, every consciousness, every ideology, and every preconception; thus, like a breath enraptured in ecstasy, he came out of his physical body through the pineal gland. He then saw himself, converted into an immaculate, ineffable, and divine white atom! Such an atom is the Ain Soph, which is the atom from where the Father, the Son, and the Holy Spirit emanated. When the Great Cosmic Night arrives, the Shining Dragon of Wisdom (Kether, Chokmah, and Binah) of every human being will be immersed within the Ain Soph. Behold here the Trinity immersing within the Unity! Lo and behold the Holy Four, the Tetragrammaton of the Kabbalists!

The Superior Beings of the Ain Soph

John, while enraptured in such a state of ecstasy, knew that deep within each one of us there exists a Star from the infinite space, an ineffable super divine atom of the abstract space.

All of a sudden within the depths of that starry space, John perceived a divine ineffable temple of the Abstract Absolute Space.

John entered through the doors of that sanctuary. Some Gnostic Archbishops were within the temple; John consulted one of them and asked something he needed to know (it was about the exact date of his Cosmic Initiation). The answer was exact, thus the outcome pleased him. Subsequently, he consulted about a few other things regarding the destiny of mankind, and something about his own nemesis (karma). The great Gnostic Archbishop, a holy and venerable Elder, answered: “For us, all of the activities of the human mind are similar to what the activities of the mineral kingdom are to ye; when we examine the human mind, it is like examining a mineral.”

John became terribly astounded with such an answer. Indeed, the beings who live within the World of the Ain Soph have transcended us, they are beyond our comprehension. Those beings no longer belong to the human kingdom, not even to the Kingdom of Angels, Seraphim, or Potentates!

Regarding the aforementioned statements, a friend of ours made the following supposition:

The Impossibility of Those Superior Beings

“Let us suppose, if those ineffable and superior beings live immersed within the contemplation of their divine atmosphere, within the Abstract of the Superior Worlds (the world of the Ain Soph), then they cannot comprehend us, and it is absolutely impossible for them to descend to us, the humans, since their matter is incompatible with ours.”

Reincarnation of Those Beings

We, then, had to answer our friend with the following: “Certainly, each life-form lives in his own element. The fish live in the water; the birds live in the air; humans and terrestrial animals live on the dust of the earth, the salamanders live in the fire. The tenebrous ones exist within the Abyss. And of course, divine hierarchies live in the superior planes of consciousness; yes, they live in the ineffable worlds! The human Monad was an ant, a reptile, bird, and quadruped. It would be impossible for a human to be an ant, reptile, bird, or quadruped again. A human being has already gone through that course and cannot retrograde! The same applies to the ineffable beings of the world of the Ain Soph. Neither can they retrogress, nor return to the human state! It would be like humans becoming ants again. Nevertheless, every now and then, some of those beings of Light descended from that elevated region to help mankind. They are the great Avatars, the great reformers, who from the dawn of times, have watched over humanity. In fact, we have not been abandoned. The great White Lodge, with numerous Masters, is here on the terrestrial world; they work on behalf of mankind.”

Incarnation of the Logos and of the Kundalini

To incarnate the Logos within our Self is the most essential task. To achieve the Venustic Initiation is what is transcendental and let it be understood that this problem is absolutely sexual!

Every individual needs to awaken the Kundalini ; every human being needs to make their creative energy return inwardly and upwardly! When the creative energy reaches the Ethereal Body, the latter is transformed into the wedding garment of the Soul . The chakras awaken when the creative energy breaks through the Astral Body; thus, this is how the person, the student is converted into a true theurgist. Then, the powers of the mind are awakened when this energy reaches the Mental Body. This is how the human mind becomes a Christic Mind.

This is how the Word can become Flesh!

The secret clue for this task is the “Arcanum A.Z.F.” The clue of the Magnus Opus (the Great Work) if found in the union of the phallus and the uterus! Not to ejaculate the ens seminis (the entity of semen) is the vital matter of the clue; this is how the sexual transformation is achieved. This is how the Kundalini awakens! The fires of the dorsal spine are Jehovistic, the fires of the heart are Christic and the Rays of the Father flash on the forehead!

That is why we must sublimate the sexual energies up to the heart, because the Second Logos, the Internal Christ, is located in the heart!

What is from “above” must penetrate into that which is from “below,” so that what is from below can return towards the worlds of Great Light. It is necessary to work with the raw-matter of the Great Work; but this raw-matter, this Christonic semen, must be sublimated up to the heart, only then can the creative energy of the Third Logos be able to elevate itself “upwards,” towards the worlds of the Great Light. And only then is it possible to become a theurgist!

By purchasing a print edition of "Logos, Mantra, Theurgy", you get a high quality, permanent source of profound knowledge, you help us print more books, keep this website online, and allow us to give free books to prisoners, churches, libraries, and more.
Pick a Bookseller