The Age of Aquarius began on February 4th of 1962 between 2:00 and 3:00 pm. Many schools await the new era. This book is the message of the new era of Aquarius.

Many esoteric students will be amazed because we predict frightful cataclysms for the new era of Aquarius.

The “I,” the “myself,” the reincarnating ego, certainly wants comfortable situations. It longs for an era of security and an era that offers many harmless things, safe surroundings, and a sensual comfortable era, without war, hatred, or problems.

It is urgent to know that life has begun its return toward the great light. This signifies catastrophe.

The Earth will experience a process of planetary disintegration and reintegration. Aquarius brings terrible cataclysms.

We have studied the verses of the book of Revelation (Apocalypse) in the superior worlds. We give the results of our investigations in this book.

Much has been said and written about the Apocalypse. However, only intellectual speculations have been made and the words of various authorities have been repeated.

The present work is the result of tremendous esoteric investigations that were patiently performed by us in the superior worlds.

We have found the Apocalypse to be divided into three parts: the first we have entitled “The Son of Man,” the second “The Sealed Book” and the third “The New Jerusalem.”

The first part teaches the path of the razor's edge.

The second is related with the times of the end.

The third tells us of the future Earth.

We do not theorize in this book. This work is one hundred percent practical.

You are not alone. We profoundly love you, and when you are walking on the path of the razor's edge you will be assisted by the brothers and sisters of the temple.

These are three powerful, united movements that propagate gnosis. Throughout the world, they teach the gnostic esotericism of our beloved savior of the world.

If after reading this book you wish to enter AGLA, you must write to us. Not a single letter will remain without answer. AGLA is formed by millions of people in the West, as well as in the East. AGLA is forming the world salvation army.

The supreme chief of AGLA is Jesus Christ. Let it be known, beloved brothers and sisters, that Jesus the Christ is alive. Jesus Christ resurrected on the third day with his body of flesh and bone, and he still lives with this same body in Shambhala. The secret country of Shambhala is in Asia, in Tibet. The Master Jesus has a temple there. Other masters live with him who have also resurrected and who have kept their bodies over the many ages of time.

The beloved Master Jesus the Christ has been very active and has worked intensely by helping this poor, suffering humanity. He is the chief of the Gnostic movement. He is the supreme hierarch of AGLA.

Although it seems incredible, the beloved savior of the world worked as a nurse in the fields of battle during the First and Second World Wars.

Let us transcribe the touching story of a wounded soldier written by Mr. Mario Roso de Luna, the ingenious Theosophical writer. This story is found in The Book That Kills Death, or The Book of the Jinn, which is a fine piece of work by Mr. de Luna. The story is as follows:

“Strange news came to us when we were in the ditch at war.... certain rumors were spreading along the stretch from Switzerland to the sea, yet their origin or authenticity were unknown. Word came and went quickly and I remember the moment in which my partner George Casey looked at me strangely with his blue eyes and asked me if I had seen the friend of the wounded ones. He then told me what he knew in respect to the rumor that was circulating. He told me that after many violent battles, a man dressed in white had been seen bending over the wounded soldiers as bullets were fired all around him and grenades fell at his feet. However, nothing had the power to harm him. He was a hero superior to all heroes or something greater still.

“This mysterious person whom the French call ‘the comrade dressed in white’ seemed to be everywhere at the same time. In Nancy, Argona, in Soissons, in Ypres, and everywhere, all men spoke of him with their voices lowered. However, some of them smiled and said that the ditch was affecting their nerves.

“I was frequently being careless with my words and I exclaimed that I must see in order to believe, and that I needed the German knife to wound me so that I may fall to the ground.

“The following day, we were at battle at the front; the cannons were roaring from morning till night and began again the following day. At midday we received the command to move in and take the front, which was two hundred yards from our position. As we were advancing we realized that our cannons had failed to fire at the moment of attack. We needed hearts of steel in order to march on. None of us thought; we only acted, and we continued to march on.

“We had advanced 150 yards when we realized that we had acted poorly. Our captain commanded us to take cover, and precisely at that moment both of my legs were wounded and by divine mercy I fell into a hole. I must have fainted because when I opened my eyes I was alone. The pain was excruciating, however I remained motionless for I was in fear that the Germans would see me, being only 50 yards away from them. I was hoping that someone would have pity on me. Soon I realized that there were men nearby that would have considered themselves in danger within the obscurity of the night if they had known that a comrade was still alive.

“I felt relieved as nightfall grew nearer. The night fell and I suddenly heard footsteps that were not weak, but firm and strong, as if neither obscurity nor death could have altered their movement. I never would have guessed who was approaching. Even having seen the clarity of the white cloth within the obscurity, I assumed that it was a farmer wearing a shirt, and it even occurred to me to be an insane woman. But suddenly, with amazement—whether of happiness or terror, I do not know—I realized that he was the comrade dressed in white and at that precise moment the German rifles began to fire. The bullets could not have missed such a target because he raised his arms begging them to stop. He then retracted his arms and remained in the form of a cross, as the crosses that are frequently seen alongside the roads of France. He then spoke. His words were very familiar. I remember only the beginning of his words, ‘If you have known,’ and the end, ‘But now they are hidden to your eyes.’ Then he bent over and took me into his arms, I, the heaviest man of my group. He carried me as if I were a child. I suppose that I fell asleep because when I awoke that childlike feeling was gone. I was a man wishing to know what I could do in order to serve and help my friend.

“He was looking towards the stream holding his hands together as if he were praying. I then saw that he too was wounded. I believe that I saw a deep wound on his hand and as he prayed a drop of blood fell from his wound to the ground. I screamed without control because the wound appeared to me to be more terrifying than any of the wounds that I had seen throughout that bitter war.

“‘You are also wounded,' I said with humbleness. I do not know whether he heard me or whether he saw it in my expression, but he answered with gentleness, ‘This is an ancient wound, but it has been bothering me lately.’ I then noticed that the same cruel mark appeared on his feet.

“Amazingly enough, I did not realize who he was until I saw his feet. I then recognized him as the living Christ. I had heard the chaplain speak of Him a few weeks before, but now I understood that He had come towards me, towards I who had removed Him from my life in the ardent fever of my youth. I wished to speak with Him and give Him thanks, but I could not find the words. He then stood and said, ‘Remain close to the water today and I will come for you tomorrow; I have a duty for you to do for me.’ Moments later He was gone.

“As I waited for Him I wrote this in order not to forget this experience. I feel weak and lonely and my pain increases but I have His promise and I know that He will come for me tomorrow.”

This is the story of the soldier written by Mr. Mario Roso de Luna in The Book That Kills Death. This concrete fact infallibly demonstrates that Jesus still lives with the same physical body that he used in the Holy Land.

Here in this book we have delivered the key for resurrection. We have removed the veil of the centuries; we have delivered to poor and suffering humanity the secret doctrine of the beloved with seven seals in the book of Revelation (Apocalypse).

The beloved will remain with us even unto the end of the world and evermore.

This is his doctrine. Here you have it. Study and practice it. 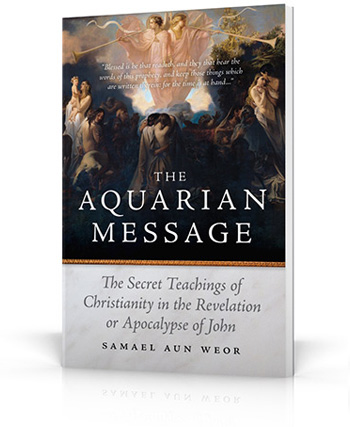 This chapter is from The Aquarian Message (1960) by Samael Aun Weor.