“And I saw when the Lamb opened one of the seals, and I heard, as it were the noise of thunder, one of the four beasts saying, Come and see.

“And I saw, and behold a white horse (the white race): and him that sat on him had a bow; and a crown was given unto him: and he went forth conquering, and to conquer.” —Revelation 6:1-2

The white race defeated Japan, and the illustrations of this race's conquering of Japan are being shown in many ways.

“And when he had opened the second seal, I heard the second beast (of the Great Arcanum) say, Come and see.

“And there went out another horse that was red: (the Atlantean red root race from which descended the red skinned natives of the United States of North America) and power was given to him that sat thereon (Uncle Sam) to take peace from the earth, and that they should kill one another: and there was given unto him a great sword.” —Revelation 6:3-4

Presently, this red horse with its wild, bristly mane and silver hooves eats peacefully within the stables of Augeias.

This brave, agile, and speedy red-skinned stallion reminds us of the warrior-like Atlantean root race, whose last noble and strong offspring were destroyed by the Yankees.

The blond citizens of the United States of North America carry in their veins the red blood of those ancient warriors, whose royal trunk was born in the Atlantean continent.

Presently, in this year of the twentieth century (1958), this red horse eats peacefully, and the citizens of the United States are preparing themselves for the atomic war. Very soon, the tempest will explode in the United States. Horribly, the hurricane will howl in the United States. The sky will be filled with pitch black clouds, and there will be much mourning, tears, and very great tribulation.

“And I heard the voice in the midst of the four beasts say, A measure of wheat for a penny, and three measures of barley for a penny; and see thou hurt not the oil and the wine.” —Revelation 6:5-6

Lo and behold, the necessary hard labor and work in order to obtain our daily bread. But the initiates want peace, and they say, “See thou hurt not the oil and the wine.” Do not hurt the sacred wine, neither the oil of pure gold that nourishes the fire of the candlestick.

You must work in peace and strive for peace, “That ye love one another, as I have loved you” (John 15:12) and take care of the wine and the oil in order for your soul to become betrothed with the Lamb.

Nonetheless, the dwellers of the Earth only want wars!

“And when he had opened the fourth seal, I heard the voice of the fourth beast (of the Great Arcanum) say, Come and see.

“And I looked, and behold a pale horse (the yellow race): and he that sat on him (China) was Death, and hell followed with him. And power was given unto them over the fourth part of the earth, to kill with sword, and with hunger, and with death, and with the (human) beast of the earth.” —Revelation 6:7-8

The war between East and West will be horrible. China will kill millions of human beings. The Chinese threat is terrifying. The Chinese horse drags death and hell before him. There has never been such a terrible threat.

The Chinese army is terribly powerful, and is armed with all types of deadly weapons.

The times of the end have arrived, and the war between the East and the West is inevitable.

The agile pale horse filled with great anger furiously neighs, with death and hell following him.

“And when he had opened the fifth seal, I saw under the altar the souls of them that were slain for the word of God, and for the testimony which they held:

“And they cried with a loud voice, saying, How long, O Lord, holy and true, dost thou not judge and avenge our blood on them that dwell on the earth?” —Revelation 6:9-10

The prophets have been killed by the dwellers of the Earth who abhor the eternal one.

“And white robes were given unto every one of them; and it was said unto them, that they should rest yet for a little season, until their fellow-servants also and their brethren (the initiates), that should be killed as they were, should be fulfilled.

“And I beheld when he had opened the sixth seal, and, lo, there was a great earthquake; and the sun became black as a sackcloth of hair, and the moon became as blood...” —Revelation 6:11-12

The radioactive particles of the nuclear explosions will profoundly alter the superior zones of the terrestrial atmosphere. These superior zones are the supreme filter for the solar rays. When this filter becomes totally altered by the atomic explosions, it will no longer classify and decompose the solar rays into light and fire. Therefore, the result will be that we will see the sun “black as a sackcloth of hair.”

The human beings will disembark to the Moon. The conquering of the Moon is inevitable. The vultures of war will conquer the Moon and it will become as blood.

There will be earthquakes everywhere, darkness, famine, unknown sicknesses, blasphemies, and a very great tribulation. The atomic explosions will provoke all of these calamities.

The times of the end have arrived. Woe! Woe! Woe of those who as in the days of Noah were eating and drinking, marrying and giving in marriage saying, “Still we have time for joy.”

Woe to the inhabitants of the Earth, since the times of the end are at hand.

The sound of the sea will be filled with frightful turbulence, and there will be monstrous tidal waves as never seen before.

There will be deadly wars, and behold, the pale horse is followed by death and hell.

The beginning of the end has already begun!

Nonetheless, all of these calamities are nothing but the warning, the preface, the prelude of the final event.

The human beings are again building the Tower of Babel. The summit of this tower is the Moon. Any illuminated clairvoyant can see within the superior worlds a hollow tower of fragile crystal (the Tower of Babel). This is treason against the eternal one; soon this tower will be destroyed. 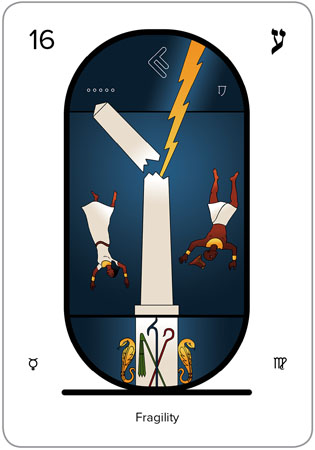 The ships (rockets) of “Babylon the great, the mother of harlots and abominations of the earth” ascend and descend through this fragile and hollow tower that is deprived of divine wisdom.

In this day and age, this Tower of Babel is represented by the hollow, superficial, and vain science of materialistic scientists.

God will confuse their tongues, and the Tower of Babel will be fulminated by the terrible ray of cosmic justice.

This fragile and hollow tower that is deprived of any type of spirituality is in these present times, as well as in ancient times, threatening the starry heaven.

The atheists, enemies of the eternal one, want to take heaven by assault, and to conquer other worlds of space. But, soon they will be wounded to death.

The terror of love and law reigns within the sacred space where the innumerable worlds move and palpitate. Interplanetary voyages are only for divine humanities of the starry space. The human being of the Earth is not yet worthy of entering the starry space. Let us put a chimpanzee or any other ape inside a laboratory and observe what will happen...

When these human beings conquer the Moon, when the atheists (enemies of the eternal one) profane the sacred space, when the wise men of this great Babylon, filled with pride and arrogance, prepare themselves to conquer other worlds, then the end will come.

The Tower of Babel will fall fulminated, and from all of this, the great Babylon (humanity) will not remain, not with even one stone upon the other.

A world is approaching; it is approaching the planet Earth. Woe to the dwellers of the Earth! The day of the Lord (the new Aquarian Age) is at hand. This world that is approaching will pass through the atmosphere and will burn with living fire. Therefore, when falling upon the Earth, the elements and all things with life therein shall melt with fervent heat.

“...and there was a great earthquake, such as was not since men were upon the earth, so mighty an earthquake, and so great.” —Revelation 16:18

“And the stars of heaven (these great geniuses of the Tower of Babel, these great luminaries of the intellectual firmament, the great lords of this great Babylon) fell unto the earth, even as fig tree casteth her untimely figs, when she is shaken of a mighty wind.” —Revelation 6:13

“And the heaven departed as a scroll when it is rolled together; and (with the planetary collision) every mountain and island were moved out of their places.” —Revelation 6:14

The new planetary mass, mixed with the terrestrial mass, will form a new world. There will be new heavens and a new Earth for the future sixth great root race.

“And the kings of the earth, and the great men, and the rich men, and the chief captains, and the mighty men, and every bondman, and every free man (already physically dead and in their astral bodies), hid themselves in the dens and in the rocks of the mountains (since they will be terrified and surprised by a cataclysm which they do not expect or even remotely suspect.)

“And said to the mountains and rocks, Fall unto us, and hide us from the face of him that sitteth on the throne, and from the wrath (justice) of the Lamb:

Really, only those who have built the church for the Lamb upon the living rock (sex), will be able to firmly stand.

Those who build their church upon the sands of theories will tumble to the abyss, into the submerged worlds, into the atomic infernos of this great nature. These are the lost ones.

In these future days, only the just ones will be secretly saved. These select people will be those who were capable of lifting up the serpent upon the staff, as Moses did in the wilderness.

The seed plot for the future sixth great root race will come from these select people.

The times of the end have arrived and we are in them.