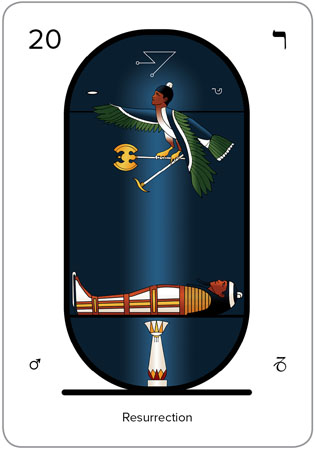 In the waters of life is a column which is a symbol of edification. The foundation of the column is the Cubic Stone. From the two columns, the white and the black, only the white, which is the symbol of purification, has remained.

In the middle of the plate is a mummy. From it escapes a sparrow hawk with a human head which flies toward the world of the Spirit. It represents the soul . It is indubitable that upon awakening the consciousness we transform ourselves into sparrow hawks with human heads, being able to fly freely throughout the starry space. On top of the heads of the sparrow hawk and the mummy is a symbol which represents the pineal gland, a sign of illumination.

The soul of any Egyptian hierophant has four bodies:

Woe unto those who, after having attained the Second Birth, continue with the ego alive. They shall in fact convert themselves into Hasnamussen (abortions of the Divine Mother Kundalini ) with a double center of gravity.

The Twentieth Arcanum is the resurrection. In order for resurrection to be achieved, death needs to be previously achieved. Without death, there is no resurrection.

How beautiful it is to die from instant to instant! The new comes only with death.

When Seth (the ego) dies in an integral way, only the Being remains within us. The Being is that which gives us authentic individuality.

When Seth is disintegrated in a total form, then the consciousness, the Soul , is liberated; it awakens radically, and the interior illumination comes.

Indeed, the resurrection of the Soul is only possible through cosmic initiation. Human beings are dead and can only resurrect through initiation. Let us remember the words of Jesus the great Kabir, “Let the dead bury their dead.” [Matthew 8:22] “God is not the God of the dead, but of the living.” [Matthew 22:32]

No one can pass the second or third type of resurrection without having first passed the spiritual resurrection.

2. Resurrection with the body of liberation: This is performed in the superior worlds. This body is organized with the best atoms of the physical body. It is a body of flesh that does not come from Adam. It is a body of indescribable beauty. With this body of paradise, adepts can enter into the physical world and work in it by making themselves visible and tangible at will.

This is how an initiate escapes from the grave. In the suprasensible worlds, in hyperspace, holy women treat the body of the initiate with perfumes and aromatic ointments. Then, by obeying superior orders, the physical body penetrates within the astral body through the top of the head. This is how the master once again possesses his physical body. This is the gift of Cupid. After the resurrection, the master does not die again. He is eternal. With this immortal body, he can appear and disappear instantaneously. Masters can make themselves visible in the physical world at will.

Jesus the Christ is a Resurrected Master who for three days had his physical body in the Holy sepulcher. After the resurrection, Jesus appeared before the disciples who were on their way to the village of Emmaus and dined with them. After this, he was before the unbelieving Thomas, who only believed when he put his fingers in the wounds of the holy body of the great master.

Hermes, Cagliostro, Paracelsus, Nicholas Flamel, Quetzalcoatl, St. Germain, Babaji, etc. preserved their physical body thousands and even millions of years ago without death harming them. They are Resurrected Masters.

Only with the Arcanum A.Z.F. can the Elixir of Longevity be elaborated.

Resurrection is impossible without the Elixir of Longevity.