Undoubtedly, the fourth coordinate is the same hyperspace of hypergeometry, by means of which it is possible to perform supernatural acts, like the disappearance or appearance of a body in the three dimensional space of Euclid, or the removal of any given object from the interior of an hermetically sealed box.

Clearly, it has been demonstrated that when an electron and a positron annihilate each other in order to liberate energy, two photons of light appear, or more exactly, two gamma rays.

The experiences that have verified the crude reality of this phenomenon sequentially come to prove the existence of the fourth dimension.

Unquestionably, the various phenomena of authentic levitation have always been possible thanks to the extraordinary agent of the fourth vertical.

It is not irrelevant to emphatically affirm (and without much pomposity) that mystical levitation is an unusual soaring of the physical body above the ground.

Since many people do not even know the ABCs of this issue it is convenient to cite various anchorites that levitated before the diverse public.

Let us start with King Saint Stephen of Hungary, illustrious medieval lord who died in 1038, who one night was soaring in the air while praying in his tent.

We continue with Saint Dunstan, Archbishop of Canterbury, heroic man of God, who precisely on Ascension Day, May 17, 988, miraculously soared to the majestic dome of the cathedral.

Saint Ladislaus of Hungary (1041-1095), a renowned achorite, who in an historical night soared on the ground while praying in the famous monastery of Warasdin.

Saint Christine (1150-1224), the admirable and Illustrious mystic, who already having been left for dead, delightfully soared to the dome of the church during the funeral service.

Saint Elizabeth of Hungary, famous matron; Saint Edmund; Saint Ludgarda, very famous religious lady; the blessed Guilles of Santarem; the mysterious Margaret of Hungary; the spiritual Saint Dulcelina; the illustrious Saint Thomas Aquinas, famous lord of wisdom; Saint Agnes of Bohemia, and many others, who while submerged within the fourth dimension soared in ecstasy.

It is stated by the legend of the centuries — and this is known by the divine and human — that when our brother Francis of Assisi (1186-1226) reached the twilight of his life on the Mount Alverno his ecstasies multiplied. His beloved disciple Brother Leo, who happily brought him food, found him always in a state of rapture out of his cave, at a good height soaring over the perfumed earth, sometimes reaching the top of the beach trees, then he was out of sight; he soared into the fourth coordinate.

Proceeding with these mystical, scientific topics, it is worthwhile to cite also Saint Catherine de' Ricci (1522-1589), the very famous stigmatized prioress of Prato, who when entering into ecstasy stayed suspended in the surrounding environment.

Many other penitent cenobites such as Saint Francisco de Paula, Saint Francis Alcantara, Saint Thomas of Villanova, Saint Francis Javier, etc., were detached from the floor in their ecstasy and kept soaring in the air before the extraordinary wonder of public consciousness.

Because of being unusual and unexpected, there are clearly those famous and extraordinary cases of that mystic called Teresa of Avila (1515-1582), described by herself in great detail, dialectically explaining how while praying the ineffable magical power absorbed her into the unknown dimension, then she soared before the astonished religious nuns.

Any given day, it does not matter which, that saint was so high above the floor that they could not give her the host.

The double levitation of Saint Teresa of Avila and John of the Cross in the Carmelites of Avila caused general amazement, astonishment ... Then these two mystics were seen soaring in space in a state of ecstasy. 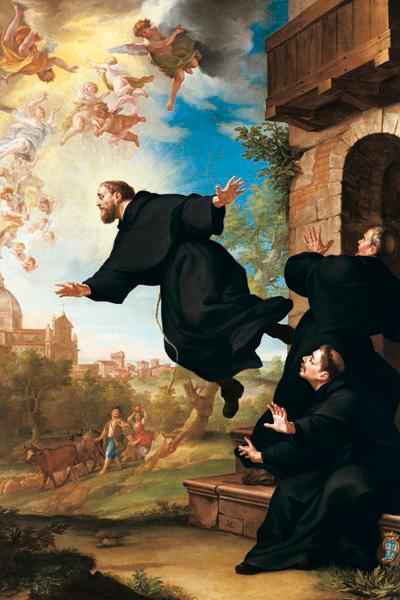 They say that the blue monk once known as Joseph of Cupertino soared into the air seventy times. This magical event took place back in 1650, and is why he was canonized. Each time this sweet-faced hermit detached from the hard ground, he uttered a cry. When interrogated by Cardinal Lauria about this strange and mysterious cry at the precise moment of his soaring, the saint esoterically answered, “When the gunpowder ignites in the harquebus, it explodes with a great noise; so too the heart when embraced by divine love. Amen!"

Searching old manuscripts with tenacity of a monk in the cell, we found the following from the sacred land of the Vedas:

“He who meditates on this Chakra [of the heart] has full control over Vayu Tattva [ethereal principle of air]. He gets [the siddhis, powers of the saints, like] Bhuchari Siddhi, Khechari Siddhi, Kaya Siddhi, etc., (flying in air, entering the body of another). He gets cosmic love and all other divine Sattvic qualities.” - Swami Sivananda, Kundalini Yoga

When one wants to learn the science of the Jinns, the doctrine of levitation, then the substantial development of the tranquil heart is not postponable or delayable.

It would be incongruous, disconnected from the Tertium Organum or third canon of thought, to attempt Jinn suitability without previously educing and energizing the mystical powers of the saints in the tranquil heart…

We would never contradict or inhibit the esoteric practices of magical levitation. To confuse, spoil, is not our intention in any way; we only propose the "sacrificus intellectus" (the sacrifice of the intellect) if indeed we long for the harmonious development of the fires of the heart.

The theoretical and speculative mind expands, extends, and develops at the expense of the subtle energies of the heart, and this is very regrettable.

Intellectual cerebration, being mechanistic, sucks, mercilessly vampirizes, the vital powers of the heart.

Through many years of constant observation, study, and experience, we have fully verified that the pseudo-esotericist and pseudo-occultist locked within his little world, a bookworm, a intellectual or reasoning person, becomes indeed a true failure in practical levitation.

It is worthwhile to imitate Joseph of Cupertino in his prayers and ecstasies so that the heart, enflamed by divine love, develops harmoniously, enabling us to consciously enter within the fourth vertical with the physical body, beyond the three-dimensional space of Euclid.

Unquestionably, those sixty Aztec elders who on the hill of Coatepec made their operations and magical circles in order to then submerge themselves within the fourth coordinate, had each in advance unfolded the marvelous fires of the heart.

The story of that mysterious journey through the twilight zone is heroic, unusual, unexpected.

Undoubtedly, any metamorphosis is possible in the parallel universe of the fourth dimension.

Therefore, the story recorded by Fray Diego Duran in his very remarkable work entitled “History of Mexico” is not mere boasting, or a bookish, perverse joke.

If we face across the country the history of the Jinn, we will find Milarepa in Eastern Tibet, a very venerable and exorable master, illustrious sage, who like any of the sixty elders of Montezuma knew how to levitate in the fourth dimension. A perfect adept with magical powers, he had the grace to visit innumerable sacred paradises and heavens of the buddhas of compassion, where by virtue of his all-absorbing acts and extraordinary devotion, the gods that govern those blessed places favored him, allowing him to express the teachings of the Dharma.

With his physical body submerged in the fourth vertical, Jesus the great Kabir walked on the water of the sea; this is known by the divine and human.

Unquestionably, Philip the apostle of the divine rabbi of Galilee is the blessed patron of the Jinn states.

By purchasing a print edition of "Secret Doctrine of Anahuac", you get a high quality, permanent source of profound knowledge, you help us print more books, keep this website online, and allow us to give free books to prisoners, churches, libraries, and more.
Pick a Bookseller
Share This Page: