The miter is much damaged by time or by human barbarism.

We appreciate a pectoral that rises to its cheeks; it correctly indicates the soul of things: the Being.

The arms that reach the center of its chest always indicate the two ascending forces.

The Masonic apron that covers its sexual organs is much appreciated on its waist. A face indicating the third force is shown on the superior part of the apron.

A precious belt with the "X" embossed on it is much appreciated.

It is necessary to study the doctrine and to perform the work.

The great Mayan initiates live within the fourth vertical or fourth dimension; there is where they have their temples and marvelous cities. If we want to investigate this, here is the precise clue to do it. On a loaf of bread the following mantras have to be written, Senosan Gorora Goberdon, just as written below: 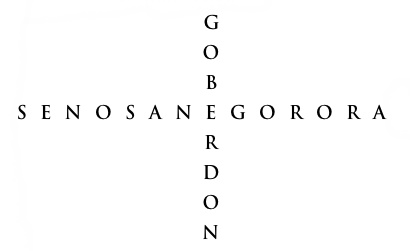 Thereafter, the loaf of bread has to be eaten. The mantric words must be written on cross with a pencil or ink.

When we investigated within the superior worlds in order to find out the scientific and esoteric value of this clue, we found the following:

Once, while gathered with a group of brothers and sisters, we fell asleep by means of the effect of the vocalization of that mantra, thus we "abandoned" the physical body and entered into the Astral Plane. There, we inquired about this clue and were astonished by the outcome of our investigation.

We saw a sea where a terrific god of the ocean shook the immeasurable depths of the sea in such a way that ethereal waves were formed, which, while spinning in a concentric manner, were menacingly precipitated towards the place we were gathered.

This terrific god had provoked an electrical whirlwind, an ethereal hurricane, an inconceivable force, in order to precipitate it towards where we had left the physical body.

So, when we pronounce the mantra SENOSAN GORORA GOBERDON, that ineffable God will come to our call, and will submerge our physical body into the fourth dimension.