Description of Stela H: The Priestess 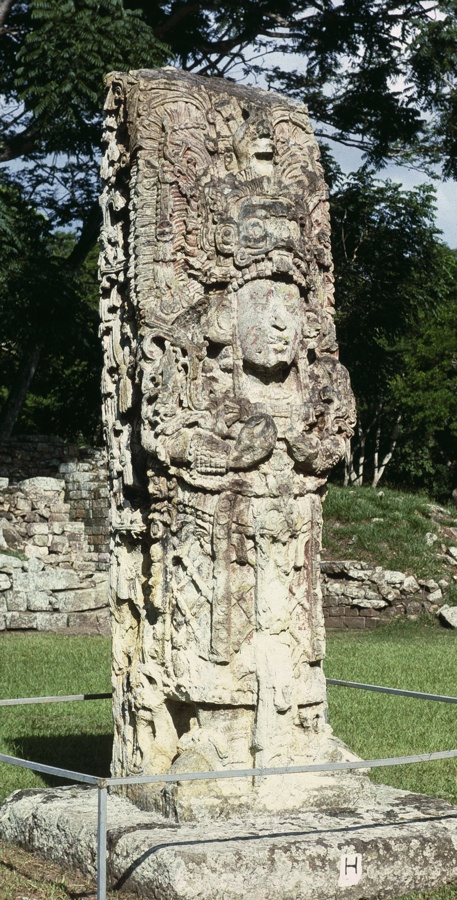 The face of this deity has a completely hieratic countenance.

Her miter carries all the characteristics of the true priesthood; she is omnipotent, marvelous.

The form of her ears indicates the Verb, the Word.

Her hands are indicating the ascendant forces. In the center between her hands there is a human resemblance, a profile that clearly signifies the true man, the causal man.

The scepter appears like on the other stelas, however here we notice a change because it reaches the belt, which in Hebrew corresponds to Hod.

Hod in Hebrew corresponds to the astral world; this same thing is applied to all the sacred scriptures of all nations.

The central rod (scepter) rising until connecting with the belt indicates the work with Hod and Yesod in order to convert us into workers of the Great Work.

The aspect of this stela is feminine.

At the sides of the scepter or central rod, the famous cross of Saint Andrew is appreciated.

When this cross carries the rose at its center, it becomes the rosicross.

The rose represents the Logos.

The X represents the mercury and the sulfur necessary for the Great Work of the Father.

The order of the Logos, the true rosicross, does not have a visible or tangible organization in the physical world, it does not have a physical temple; this only exists in the superior worlds.

Those who in this physical world from distinct schools and orders call themselves "Rosicrucian" are false.

The true Rosicrucian Order that the Logos has established upon the face of the Earth does not have any visible organization; it does not dictate courses by correspondence, nor does it collect fees, nor does it have juridical personality, nor does it have internal or external statutes. Their members are not even acquainted with each other in this physical world. They might be acquainted with each other in the superior worlds, yet in this physical world they very seldom, very seldom encounter one another.

All of them are capable of transmuting lead into gold and making diamonds of the best quality; all of them are Self-realized Masters.

The cross is one hundred percent sexual. In order for the rose or the Logos to blossom on the cross, it is necessary to have died within oneself completely; this is to have christified oneself totally.

The vertical phallus connected with the formal cteis makes a cross.

Therefore, those who call themselves Rosicrucian—it does not matter from which denomination—are profaning a grandiose, sublime, and sacred thing.

It is the same as saying "I am God," since that title is for Gods and not for common and ordinary people.

Only those who have christified themselves, those who already are Perfect Masters or Adepts, can enter into the Rosicrucian Order that the Logos has established upon the face of the Earth.

Therefore, those organizations that in this physical plane call themselves "Rosicrucians" are false. Again, it as saying "I am God," so it is a blasphemy, it is pride, profanation. Thus, they are false, and of Rosicrucian have nothing but the name.

The true Rosicrucian Order is for Resurrected Masters, for the resurrected, defunct ones who now have the living Christ in their interior.

We have given these explanations in relation with the two Xs found on stela H; these are very important.

The belt indicates the upwardly ascension of the energies.

Again, the face that appears in the center, between the two hands, clearly indicates Tiphereth, the human soul.