The Third Infernal Circle, The Sphere of Venus

Friends listening to me on this night, we are going to talk about the Venusian infernos, which are located, as is already known, within the infradimensions of nature, beneath the epidermis of the Earth. Unquestionably, this Venusian region is much denser, much grosser than the former two regions, since every atom of its matter contains within its interior 288 atoms of the Absolute. Obviously, these are much heavier atoms, and therefore the materiality is much greater. Moreover, the very fact that this sphere is governed by 288 laws makes this subterranean zone very complicated, frighteningly difficult, and painful. 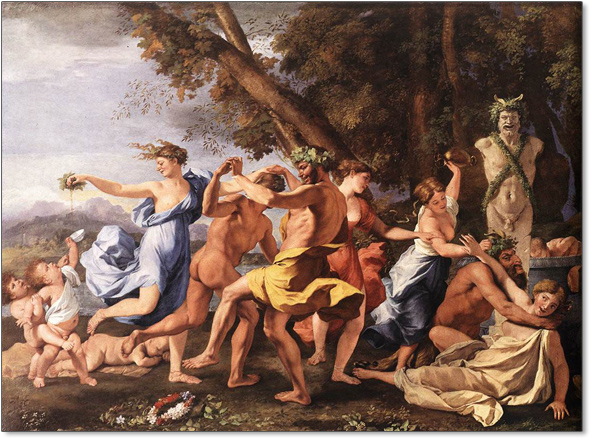 Thus, by expanding this subject-matter, by delving a little more within this theme, I can emphatically affirm to you that this is how pain comes after pleasure. Now you can explain to yourselves how life will be or how existence will be for the lost souls within the submerged region of Venus. No wonder Dante found incessant rain, frightful cold, mud, sewage, rottenness, etc. within the submerged abysses of the third infernal circle. Equally, the frightful wide triple-throated barks of Cerberus, the infernal dog, are heard with revulsion by the defunct in those regions. This symbolic three-headed, cruel, monster dog represents the luciferic, violent, animal passions, completely out of control.

Behold there the leisure of the ancient Rome of the Caesars transformed into fatal consequences. Behold there Petronius who faced death as a last pleasure in the midst of a rowdy party, loved by all the women and crowned with roses and laurels. Behold also there the Goddess Lesbos amidst her lesbians; among them is found the poetess Sappho, who poetically sang of the infatuations of all the degenerated people of her epoch. There also is found the lyre of Nero broken into pieces, and the arrogant lords of great feasts, grotesque dwelling of the men of Heliogabalus, famous gluttons, true peacocks who gloriously shone at ancient jamborees. What happened to their goblets of fine baccarat?

Alas! What was the end of the swords of those gentlemen along with their oaths of love, the kisses of their lady, their sweet words, the applause of guests, the compliments, the praises, the regal dresses, the perfumes of the ladies, the pompous dances, the soft carpets, the brilliant mirrors, the regal poems, the damned purple, and exquisite silks? Now only the pestilence of the underworld, where Ciacco prophesied to Dante the fall of the victorious party in the beautiful Florence and the rise of the oppressed, which afterwards, newly defeated, were dominated in an even more tyrannical manner by the same party.

In this abominable zone of bitterness that poet, disciple of Virgil, unexpectedly asked for "Farinata and Tegghiaio, they who were so worthy of Giacopo Rusticcuci, Arrigo and Mosca, and others who bent their minds on working good" and who now dwell in even more profound regions within the infernal worlds.

Many sincere but mistaken people who terrifyingly devolve within these abysmal regions were people who livened with their lyre the fastuous rooms of great lords. Likewise, beautiful virtuous maidens that sang poems and unhappy wine drinkers from the suburbs of many cities, etc. now live within these infernos of the third Dantesque circle.

Question: Beloved Master, you mentioned that in this third Dantesque circle of Venus dwell many sincere but mistaken people, in other words, many souls that undoubtedly performed good deeds and nonetheless regardless, they suffer in those infernos. So, I ask, why is it that the sincerity of those souls does not constitute an extenuating element that saves them from such tenebrous punishment?

Samael Aun Weor: Friend, regarding your question, we are sure that if in life we practice a lot of good, such good deeds will always be paid back with increases. The divine never fails in rewarding good deeds. It always pays back every person according to their deeds.

Regardless, I beg you to patiently pay attention in order to understand the course of this lecture. So pay attention, listen to me: whosoever has exhausted his cycle of 108 existences and has not achieved the inner realization of his Being enters into the submerged devolution within the infernal worlds. However, it is clear that first we are paid for our good deeds before entering into the abode of Pluto.

Now you will comprehend, ladies and gentlemen, the reason why many perverse people in their present life live in opulence, while some saints or people who are working on their self-realization scarcely have food, clothing, and shelter.

Thus, it is unquestionable that after the good deeds have been well paid, those who are without self-realization enter into the subterranean abysses.

So, then my friend, understand what the law of retribution is. So, all of you comprehend, please comprehend.

We have been emphatically told that the original sin is fornication, thus fornication is the foundation of devolving waves within the infernal worlds. I am not stating that drunkards and gluttons breathe exclusively within the third infernal circle; it is obvious that the lost ones are 100 percent unredeemed fornicators. Now you will comprehend for yourselves why Dante found the dog Cerberus, living symbol of the sexual forces, barking lugubriously within the tenebrous regions. This clearly means that the inhabitants of the submerged regions are never free from lust, thus they suffer frightfully. However, we must specify, and this is what Dante, the disciple of Virgil, does, thus we must do the same. Listen: certain defects that we carry within stand out within each of the nine circles or infradimensional regions of nature, and that is all. 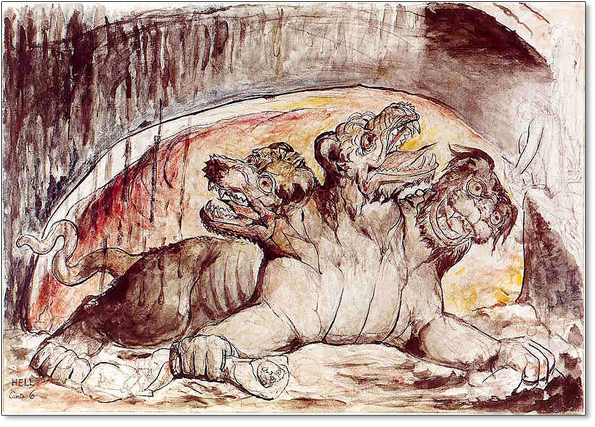 Question: Master, we have learned when studying the Egyptian Tarot cards that the dog symbolizes the Holy Spirit, since the dog guides us so that we can go out from within the infernos when we have decided to self-realize our selves. Nevertheless, the Cerberus of which Dante talks, and based on what you have just said, symbolizes lust. Would you be so kind to clarify your dissertation?

Samael Aun Weor: Gentleman, allow me to inform you that the dog of Mercury is strictly symbolic, since this clearly allegorizes the sexual potency. Hercules took this dog out of the abyss so that it would serve him as a guide, and we do likewise when we achieve chastity. That is, by working in the forge of Cyclops, by practicing sexual magic, by transmuting our creating energies, we advance on the path of the razor’s edge until achieving the final liberation.

Woe to the gentleman who abandons his dog! He will be mislead from the path and will fall into the abyss of perdition.

Regrettably, the intellectual animal mistakenly called human has not achieved chastity; in other words, the intellectual animal has not taken Cerberus out of the infernal domains. Now you will comprehend for yourselves the reason why the defunct suffer within the Plutonian abysses when they hear the frightful barks of Cerberus, the dog with the ravenous, wide, threefold throat.  It is obvious that the lost ones suffer the insatiable thirst of lust within the frightful Tartarus.

This was the crude reality of a terrifying materialism, whose mere remembrance shivers the innermost parts of my soul .

The table of the feast was covered of bottles of liquor and filthy food, very especially for gluttons; in the center of the table was a great tray, upon which the head of a pig stood out.

Horrified by the macabre horrifying feast, I was looking with pain at the place of the orgy, when unexpectedly, everything changed; my divine Real Being, my Innermost—that Angel of the Apocalypse of St. John, who has the key of the bottomless pit in his hands—forcefully as if by magic laid hold of me by one of my arms, and snatched me out of that room. He then threw me upon a white mortuary sheet on that muddy, loathsome floor; there, he flogged me with a great chain while saying, “You are my Bodhisattva, my human soul, and I need you in order to deliver the message of the new age of Aquarius to humanity; are you going to serve me or not?”

Then I, with a lot of remorse in my heart, answered, “Yes, my Lord, I will serve you, I repent, forgive me.”

Thus, my friends, this is how I came to abhor all that filth that is liquors, feasts, gluttony, drunkenness, etc., since the only thing that comes from all that filth are tears, which are symbolized by the rain. Those pestilent waters of bitterness and horrible mud of misery shone within that horrible region.

By purchasing a print edition of "Hell, the Devil, and Karma", you get a high quality, permanent source of profound knowledge, you help us print more books, keep this website online, and allow us to give free books to prisoners, churches, libraries, and more.
Pick a Bookseller
Share This Page: