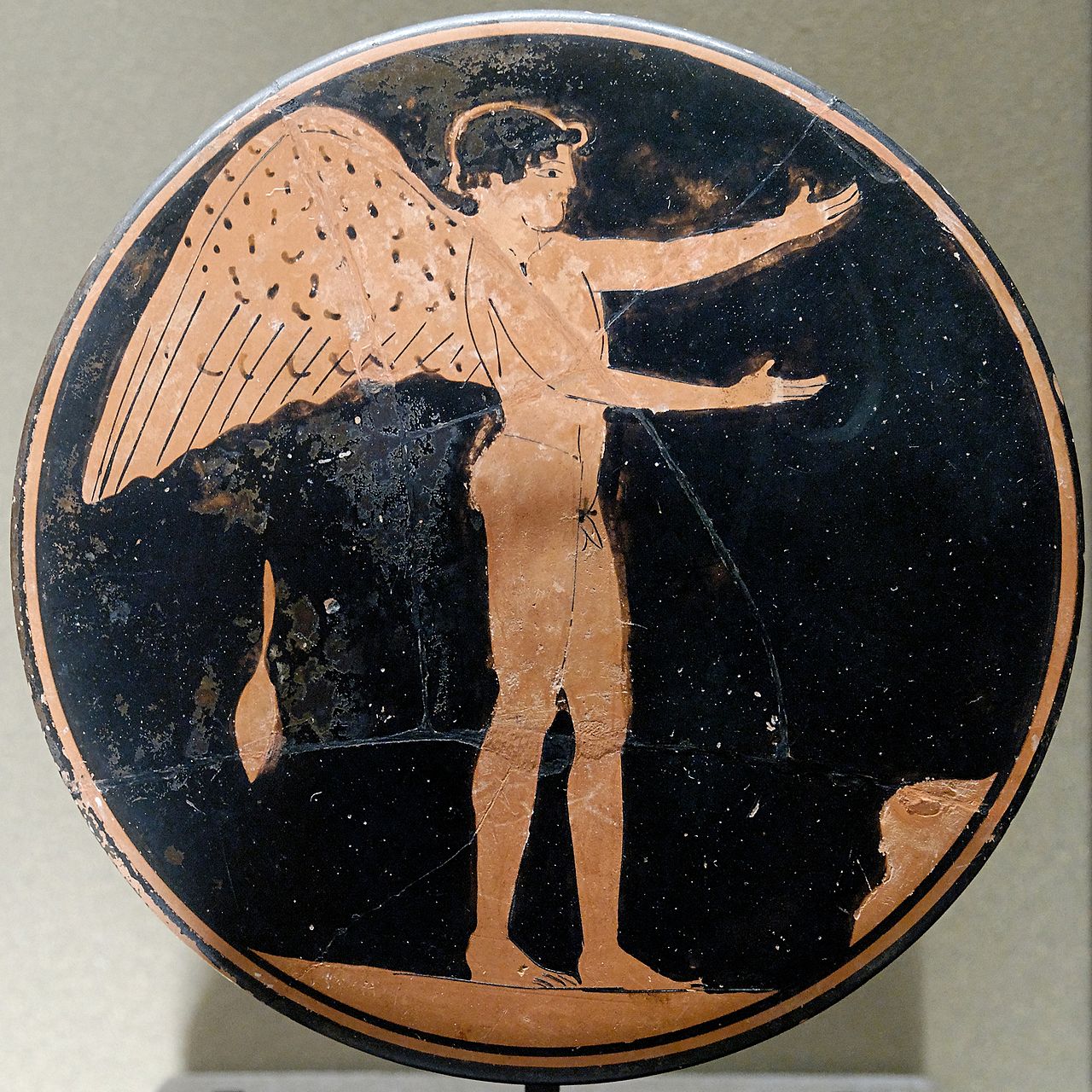 (Greek Ερως, Roman Cupid, Amor) An ancient Greek symbol of love related to the fundamental force of existence (love, sex). Sadly, as with most esoteric symbols, the interpretation and depiction of Eros was perverted over time.

"In the sense in which he is usually conceived, Eros is the creature of the later Greek poets; and in order to understand the ancients properly we must distinguish three Erotes: viz. the Eros of the ancient cosmogonies, the Eros of the philosophers and mysteries, who bears great resemblance to the first, and the Eros whom we meet with in the epigrammatic and erotic poets, whose witty and playful descriptions of the god, however, can scarcely be considered as a part of the ancient religious belief of the Greeks. Homer does not mention Eros, and Hesiod, the earliest author that mentions him, describes him as the cosmogonic Eros. First, says Hesiod (Theog. 120, &c.), there was Chaos, then came Ge, Tartarus, and Eros, the fairest among the gods, who rules over the minds and the council of gods and men. In this account we already perceive a combination of the most ancient with later notions. According to the former, Eros was one of the fundamental causes in the formation of the world, inasmuch as he was the uniting power of love, which brought order and harmony among the conflicting elements of which Chaos consisted. In the same metaphysical sense he is conceived by Aristotle (Metaph. i. 4); and similarly in the Orphic poetry (Orph. Hymn. 5; comp. Aristoph. Av. 695) he is described as the first of the gods, who sprang from the world's egg. In Plato's Symposium (p. 178,b) he is likewise called the oldest of the gods. It is quite in accordance with the notion of the cosmogonic Eros, that he is described as a son of Cronos and Ge, of Eileithyia, or as a god who had no parentage, and came into existence by himself. (Paus. ix. c. 27.)" —Dictionary of Greek and Roman Biography and Mythology

"I call, great Eros, the source of sweet delight, holy and pure, and charming to the sight; darting, and winged, impetuous fierce desire, with Gods and mortals playing, wandering fire : agile and twofold, keeper of the keys of heaven and earth, the air, and spreading seas; of all that earth's fertile realms contains, by which the all parent Goddess life sustains, or dismal Tartaros is doomed to keep, widely extended, or the sounding deep; for thee all nature's various realms obey, who rulest alone, with universal sway. Come, blessed power, regard these mystic fires, and far avert unlawful mad desires."  —Orphic Hymn 58 to Eros (C3rd B.C. to 2nd A.D.)