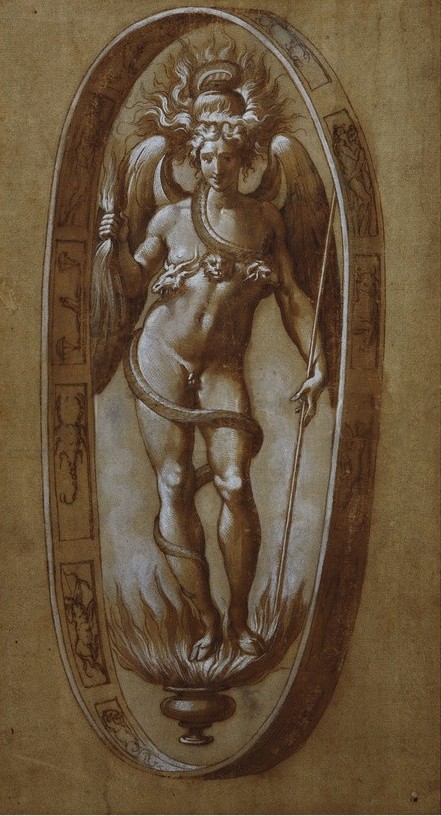 (Greek Φανης, "bring to light") Christ as symbolized in ancient mystery schools. Also called Eros (the eldest version, not Cupid) by the Greeks.

"A mystic divinity in the system of the Orphics, is also called Eros, Ericapaeus, Metis, and Protogonus. He is said to have sprung from the mystic mundane egg, and to have been the father of all gods, and the creator of men." - Dictionary of Greek and Roman Biography and Mythology

"To Protogonos [i.e. Phanes], Fumigation of Myrrh. O mighty Protogonos (First-Begotten), hear my prayer, twofold, egg-born, and wandering through the air; bull-roarer, glorying in thy golden wings, from whom the race of gods and mortal springs. Erikapaios (Ericapaeus), celebrated power, ineffable, occult, all-shining flower. 'Tis thine from darksome mists to pure the sight, all-spreading splendour, pure and holy light; hence, Phanes, called the glory of the sky, on waving pinions through the world you fly. Priepos (Priapus), dark-eyed splendour, thee I sing, genial, all-prudent, ever blessed king. With joyful aspect on these rites divine and holy consecration (telete) propitious shine." - The Hymns of Orpheus, Translated by Thomas Taylor [1792]

"In the ancient Eastern mythologies, the cosmogonic myth states that there was but water (the father) and the prolific slime (the mother, Ilus or Hyle), from which crept forth the mundane snake-matter. It was the god Phanes, the revealed one, the Word, or logos. How willingly this myth was accepted, even by the Christians who compiled the New Testament, may be easily inferred from the following fact: Phanes, the revealed god, is represented in this snake-symbol as a protogonos, a being furnished with the heads of a man, a hawk or an eagle, a bull--taurus, and a lion, with wings on both sides. The heads relate to the zodiac, and typify the four seasons of the year, for the mundane serpent is the mundane year, while the serpent itself is the symbol of Kneph, the hidden, or unrevealed deity--God the Father. Time is winged, therefore the serpent is represented with wings. If we remember that each of the four evangelists is represented as having near him one of the described animals--grouped together in Solomon's triangle in the pentacle of Ezekiel, and to be found in the four cherubs or sphinxes of the sacred arch--we will perhaps understand the secret meaning, as well as the reason why the early Christians adopted this symbol; and how it is that the present Roman Catholics and the Greeks of the Oriental Church still represent these animals in the pictures of their evangelists which sometimes accompany the four Gospels. We will also understand why Irenaeus, Bishop of Lyons, had so insisted upon the necessity of the fourth gospel; giving as a reason that there could not be less than four of them, as there were four zones in the world, and four principal winds coming from the four cardinal points, etc." - H.P. Blavatsky, Isis Unveiled