Philosophers in Western civilization have struggled for centuries to define and understand consciousness, primarily because they have lacked access to the authentic science of the consciousness, which has long been preserved in secrecy by the esoteric traditions. It is interesting then, how those traditions have been widely mocked, persecuted and subject to terrible abuses by Western society.

In recent centuries, Western philosophers attempted to separate their philosophies from religion and mythology, denouncing them, thereby excluding themselves from the greatest Western sources of knowledge about the consciousness. In Eastern civilizations, the esoteric traditions were considered the pinnacle of society, and were therefore better able to inform the public and its philosophers about the consciousness and its functions. Additionally, the Eastern traditions never made the fatal mistake of attempting to separate science from religion and myth. This brief history is important, because it underscores a critical divergence of our understanding of consciousness, and reveals a central cause for the failure of modern theory to unravel the suffering of humanity. Without understanding consciousness, the problem of suffering cannot be understood, nor changed.

Consciousness is the foundation of perception and understanding.

Consciousness is the basis upon which we evolve or devolve. Our improvement or degeneration is marked by the state or level of our consciousness.

The more elevated or purified our level of consciousness, the more refined and penetrating our perception. That is why the purest individuals in our histories have also been the wisest and most perceptive, capable of seeing not only into the human heart, but into other dimensions. Conversely, the more degenerated or impure our consciousness, the more limited and confined is our perception. That is why the most impure individuals are also the most short-sighted, foolish, and dangerous.

All religions were founded in order to encode the science of awakening consciousness, a process of purification and improvement. Conversely, there are many traditions that teach how to degenerate the consciousness by infecting it with impure, selfish, and destructive elements.

In the esoteric traditions of the Western world, the range of potential consciousness is allegorized in the Ladder of Jacob, upon which the angels ascend and descend. Thus there are higher and lower levels of consciousness, from the level of demons at the bottom, to highly realized angels in the heights.

"It is vital to understand and develop the conviction that consciousness has the potential to increase to an infinite degree." - the 14th Dalai Lama

"In the ancient initiatory rituals of the Persian, Greek, and Egyptian Mysteries the priests disguised themselves as composite creatures, thereby symbolizing different aspects of human consciousness." - Manly P. Hall, The Secret Teachings of All Ages

In Buddhism, the most important reference to the consciousness is tanthagatagarbha, which is generally translated to mean "Buddha nature." In us, it is undeveloped, a mere seed that can be grown into its full potential: a buddha, or "awakened one." This is accomplished only by knowing precisely how to do it. This process begins and is sustained by a continual effort to utilize it in the moment, by being continually aware of oneself and everything that one does, whether internally or externally.

Consciousness is not the mind or the senses. Consciousness utilizes the mind, heart, and senses to perceive, but can perceive levels of existence that are beyond our mind (intellect), heart, and physical senses.

In Kabbalah, consciousness is related to several sephiroth on the Tree of Life, primarily Geburah and Tiphereth. These two sephiroth are superior to the intellect (Netzach), heart (Hod), vital energy (Yesod), and physical body (Malkuth). This understanding corresponds to Hinduism and Buddhism. For example, in Buddhism, the skandhas or aggregates provide a window into the workings of our psychology. Skandha (Sanskrit; Tibetan: phung po) literally means “group, pile, aggregate, heap,” and is a general term of Buddhist philosophy describing the basic faculties of a sentient being or “personality.” There are five skandhas:

The Skandhas relate to five lower bodies or sephiroth of Kabbalah:

In each of these traditions, these are the lowest aspects of what is possible to acheive. Consciousness is the means to ascend higher. This is always accomplished by awakening and perceiving more by means of the purification of the individual. 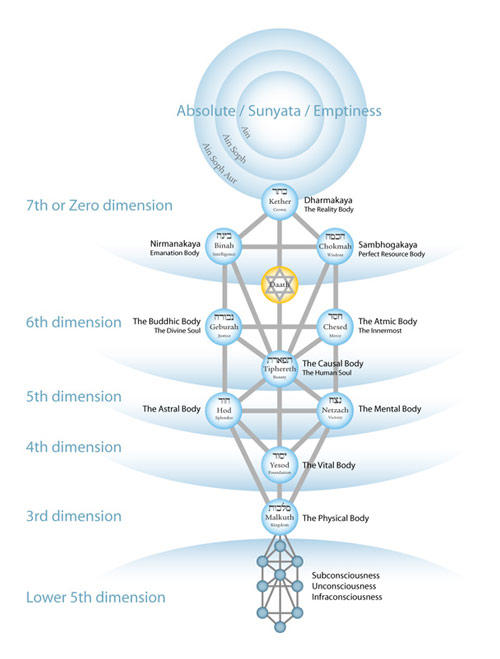 "Wherever there is light, there is consciousness." - Samael Aun Weor, The Great Rebellion

"There is an earthly sun, which is the cause of all heat, and all who are able to see may see the sun; and those who are blind and cannot see him may feel his heat. There is an Eternal Sun, which is the source of all wisdom, and those whose spiritual senses have awakened to life will see that sun and be conscious of His existence; but those who have not attained spiritual consciousness may yet feel His power by an inner faculty which is called Intuition." - Paracelsus