The term "Self-realization" implies the understanding of a special type of knowledge.

Genesis is a Gnostic Book that refers to the mysteries of Daath, indicating two trees that were in Eden.

The first Tree is Gnosis, Daath, the Tree of Knowledge (of Good and Evil): Alchemy.

In the Bible when describing sex between Adam and Eve, we read, “...and Adam knew his wife, and she had Cain...” Obviously, the term "knew" is referring to the knowledge of sexuality.

Mary says, “How am I going to be pregnant when I do not know any man?” Clearly, in the Bible sex is referred to as "Knowing."

The Tree of Knowledge teaches sexual alchemy and the reason why we take advantage of our sexual energies in order to transform them for our own purposes: Self-realization. The tree is sex itself. Of course, it is the abuse of this tree that caused Adam and Eve (humanity) to be cast out of perfection.

The Tree of Life symbolizes the different parts of the Being: 10 Sephiroth, coming out from the nothingness, “Ain Soph.” (Sephirah: sapphire/ jewel). These are 10 emanations from the Unknowable Source.

The Tree of Life is related with man as well. The root of this word Man is Manas (Sanskrit) which means, "mind." Man is that creature that has mind: objective reasoning.

The 10 Sephiroth are related with the Real Man (made into the likeness of God) and the universe. The Real Man is the Inner Self who has Realized the Ten Sephiroth within.

Kabbalah is the study of the Tree of Life.

Alchemy or Tantra is the study of the Tree of Knowledge.

There are two kinds of Kabbalists:

It is impossible to understand one Tree without the other.

Kabbalah (Hebrew קַבָּלָה) comes from קַבָּלָ Kabel which is Hebrew for "to receive." The real Kabbalist receives in the consciousness. First we get this knowledge through the intellect, but then we have to practice, and then we understand.

Kabbalah is the science of numbers... something related to the universe; we learn this through Initiation.

In Atlantis there was a society of Great Initiates called the Akaldan Society. These were the same as the Mayans.

These Mayan-Atlanteans studied Kabbalah. In Yucatan we find a book of Numbers called the Chilam Balam of Chumayel (apologies for the spelling)... Chilam balam means "Jaguar-Shaman," or Master.

Many prophecies are made in mathematics.

The 13 Katuns of the Mayans are related with the 13 Sephiroth (including the 3 unknown or hidden ones: Ain, Ain Soph, Ain Soph Aur). These are 13 Heavens related to the science of numbers.

Only by knowing Kabbalah can we understand the Mayan mysteries.

This knowledge is taught in three parts:

The Bible is based upon the Spirit and Soul of the Doctrine.

There are many symbols, parables that are impossible to decipher without the Spirit and Soul of the Doctrine.

It is the disgrace of our Aryan race that most only have the Body of the Doctrine.

Conventional Christianity ignores the Kabbalah - they think that it is an obscure science, but without it we cannot unravel the wisdom of the Bible.

In ancient times the ancient Rabbin refused to give this knowledge to all, even though it was meant to be. Jesus incarnated, and wanted to make this knowledge universal, not just for the people of Israel, and so he dictated another Kabbalistic book (to his seventy disciples, after his resurrection), which is called PISTIS SOPHIA. And in this way Jesus delivered the knowledge those ancient Israelites should have given to start with at the beginning of the Aryan race, but which they failed to do.

Many traditional Kabbalists believe that only the Jews have the real Kabbalah.

Dion Fortune, a female Master from England, talks about the Initiatic Kabbalah.

Many others speak of Kabbalah, but it is deviated, because they are deviated from the real path. We should only read the Initiates. It is necessary to understand the path we are walking upon, and the best way to do so is to study the works of Samael Aun Weor, especially Tarot and Kabbalah.

Every Sephirah is a mysterious jewel.

The Hebrew language is related to the mystery of the Bible, and is (among other ancient languages) descended from the Golden Language.

Above Kether (the Crown) we have three Sephiroth:

...or the three aspects of the Absolute (Gnosticism). These are, in synthesis, the Unknown. Moses calls these the AELOHIM. El is Hebrew for God. Elohim is Hebrew for Gods and Goddesses. The prefix “a” implies negation.

Elohim is that Deity which is always below Seity (above the Crown). Deity is the Divinity expressed in the universe. The Seity is Aelohim, of which "no image should be made" (Moses).

This Light, the Christ, has to divide itself into 3 parts in order to manifest anything. These are called the Three Supernals, or the Logoic triangle. (Logos = Word). This is the Three In One, the Holy Trinity. These are Divine Energy/ Forces, not persons.

These are the three parts of One Divinity which is Christ.

In Egypt, Osiris-Ra = Father. Many think the Egyptians were worshipping idols, but this is not so, as each part of the Egyptian myths, rituals, etc., are something of the Tree of Life, something inside us.

The Tree of Life has 3 columns: SEVERITY, EQUILIBRIUM (Consciousness) , and MERCY.

The middle pillar has its center of gravity in Kether.

We find this Trinity in EVERY religion.

Amongst the Brahmins (Brahmanism), we find this Trinity represented as :

Vishnu means "he who penetrates." Vishnu is Chokmah that is Wisdom: “wis” reminds us of “vis” = To See. “Dom” = Power. Wisdom is the Power of Seeing, which resides in the Lord the Christ. When we can penetrate in everything then we are developing wisdom/ Chokmah/ Christ.

In Gnosticism, we say God is not exclusively male, but both male and female, but an androgyny. Andro = "male." Gyn = "female."

So in Hinduism we have the female Trinity:

These are the three parts of the feminine aspect of the Divinity, in synthesis called Shakti. Shakti is that aspect of God hidden in matter. This is never talked about in Kabbalistic books; we have to discover this by working in sex, Daath (Tantric knowledge). Daath = results from the union of SHIVA/ SHAKTI, not from Chokmah/ Binah (as traditional Kabbalists state).

Daath hides the mysterious union of Adam and Eve.

The Bible refers to the feminine aspect of God as SHEKINAH = Divine Mother. The feminine aspect of Divinity is hidden in the Bible. She has Wisdom, Love, and Power. She is manifested when she is displaying her powers which are related to creation, to the first 3 Sephiroth. In order to do so she has to manifest in 2, meaning as Jehovah (androgyny): Jah (male) Heva (female) = the first couple. This is all related to the Logoic triangle of the Divinity. All religions are founded in these three forces. 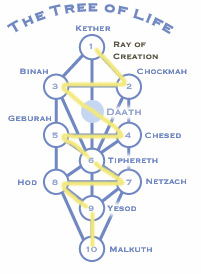 From the 3rd emerges the 4th which is Chesed, (Hebrew for "Mercy"), also known as Gedulah, which means, "Love." This is Atman (Sanskrit), the Spiritual Man. Atman is the emanation of God the Trinity, Atman the Son of God, comes from the Holy Spirit. Atman is the Individual Being we have within. Every single creature has his own Spirit/ Being/ Atman, who is the Son of Christ/ God. As souls we exert ourselves for union with Atman. Atman exerts Himself for union with Christ.

Atman, the Monad, has his Cosmic Consciousness, all the knowledge related to Atman, placed in the cosmic consciousness of the Spiritual Soul that exists within the 6th dimension.

Geburah in Hebrew means "Strength." Placed in Geburah is a type of wisdom related to Christ. This is the Divine Soul, which is feminine. In Sanskrit, this sphere or aspect is called Buddhi.

Atman-Buddhi is the Monad, the True Master which is above the Human Soul. The Master is the Spirit (Chesed or Gedulah) and Divine Soul (Geburah), never the Human Soul (Tiphereth).

Atman has a masculine soul alongside the feminine one; the masculine one is the Human Soul, which in Hebrew is called Tiphereth,"Beauty." Tiphereth is the Warrior that has to fight, to control the lower Sephiroth under the direction of the Monad. Sometimes the Human Soul obeys the inner Master and sometimes it does not.

Human consciousness, manifested into nature through Tiphereth, is always submitted to many trials. Human consciousness is placed into the process of evolution and involution. This is how the Monad learns about this aspect of creation and through experiential learning becomes Realized, gaining mastery over creation in all the levels.

When the human consciousness is manifested into nature, it expresses itself through four vehicles. These are the four lower Sephiroth: Netzach, Hod, Yesod and Malkuth.

Manas is Sanskrit for "mind." This mind has two parts: Superior Manas, the abstract mind, the intuitive mind, which is related to Tiphereth.

Below the Superior Manas is Inferior Manas, the concrete mind, in the 5th dimension, which is "Eternity." This is related to the Sephirah Netzach, which in Hebrew means "Victory." This is the Mental Body, the intellectual mind that rationalizes and thinks.

The mind is a donkey that we have to control.

From Netzach emanates Hod (Hebrew for "Glory"), related to the Astral Body, the emotional body, the Kama Rupa (Sanskrit), the Body of Desire that belongs to the 5th dimension.

Eternity is a circle with a beginning and an end. We enter into the circle of eternity when we physically die, and leave it when we are reborn. The other circle is the circle of time, related to Yesod.

Yesod in Hebrew means "the Foundation." This is the 4th dimension. Yesod is the Etheric/vital body, the superior part of the physical body.

Malkuth means "the Kingdom." Malkuth is the physical body. This sphere is related to the 4 kingdoms: mineral, plant, animal, human.

This is how everything is constituted.

In the middle of the Tree we have the Pillar of Equilibrium, the center of gravity of the whole Tree. Each of the primary triangles of the tree hangs upon this Equilibrium.

The Logoic Triangle has its center of gravity in Kether, since God is the one who can do all, and is perfect. This triangle is related to the head.

The Ethical Triangle is equilibrated in Tiphereth, the Human Soul. The Son called Christ, Chokmah, deposited his equilibrium into Tiphereth. This triangle is related to the heart, where we have the Nous atom, related to Christ.

In order to be liberated, the soul must be saved through the 2nd Sephirah, Chokmah, wisdom, and Christ does it through Tiphereth.

The Magical Triangle is equilibrated in Yesod.

Malkuth is in the feet.

There are three aspects to the soul :

Daath is related to the Tree of Knowledge, Gnosis.

If we abuse our sexual energies we cannot attain these powers. We have to be in chastity.

The Tree of Life is divided into Four Worlds:

These are the Four Manifested Worlds.

The Four Worlds are a Kabbalistic view of creation and existence based upon a division into four levels, illustrated in this verse from the Bible:

These four levels are called the Four Worlds:

There is also the Klipoth: Hell, infernos, demons. This is the World of Shells where all the Sephiroth are inverted, negatively. Klipoth is below the physical world, underneath the layers of the earth.

In every world we always study the ten Sephiroth.

A Zeir Anpin is a Master in which all the Sephiroth are manifested. The Zeir Anpin is the reflection of Arik Anpin, the Heavenly Man above.

We have to study all of these Kabbalistic worlds in order to understand the Spirit and the Soul of the doctrine, to grasp the Bible, and other Kabbalistic books.

To enter in any Sephiroth we need the mystery of Daath (the Tree of Knowledge), Gnosis. This is not intellectual but rather is related to the sexual center.

In genuine Gnosis, we study the two trees together.