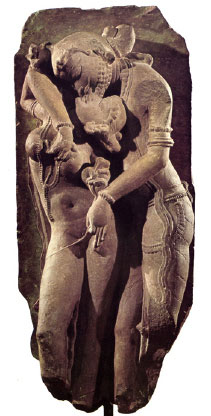 The Sanskrit word मिथुन maithuna is used in Hindu Tantras (esoteric scriptures) to refer to the sacrament (sacred ritual) of sexual union between husband and wife.

Maithuna or Mithuna has various appearances in scripture:

By means of the original Tantric Maithuna, after being prepared psychologically and spiritually and initiated by a genuine teacher (guru), the couple learns how to utilize their love and spiritual aspiration in order to transform their natural sexual forces to purify the mind, eliminate psychological defects, and awaken the latent powers of the consciousness. The man represents Shiva, the masculine aspect of the creative divine, and the woman represents Shakti, the feminine aspect and the source of the power of creation.

Krishna: “And I am the strength of the strong, devoid of lust and attachment. O best of the Bharatas, I am sex not contrary to dharma.” (Bhagavad Gita 7.11)

The Tantric student must be endowed with purity, faith, devotion, dedication to Guru, dispassion, humility, courage, cosmic love, truthfulness, non-covetousness, and contentment. Absence of these qualities in the practitioner means a gross abuse of Shaktism.

Sexual intercourse by a man with a woman who is not lawful to him is a sin. The Vaidika Dharma is very strict on this point. It forbids not merely actual Maithuna but Ashtanga or eightfold Maithuna namely Smaranam (thinking upon it), Kirtanam (talking of it), Keli (play with women), Prekshanam (making eyes at women), Guhya-bhashanam (talking in private with women), Sankalpa (wish or resolve for sexual union), Adhyavasaya (determination towards it), Kriyanishpatti (actual accomplishment of the sexual act).

A Tantric can have copulation with his wife. He calls his wife his Shakti. Wife is a house-goddess Griha-lakshmi or Griha-devata united to her husband by the sacramental Samskara of marriage. She should not be regarded as an object of enjoyment. She is his partner in life (Ardhangini). The union of a man and his wife is a veritable sacred scriptural rite. - Swami Sivananda, Tantra Yoga