What are the Astral, Mental and Causal bodies?

The terms "Astral Body" and "Mental Body" can refer to either the lunar or the solar Astral and Mental Bodies. The term "Causal Body" always refers to the solar causal body.

All intellectual animals (that is, so-called "humans"; this term is used to emphasize that ordinary people lacking solar bodies have in actuality not yet become fully human) possess lunar Astral and Mental Bodies (the lunar Astral Body is also called the "body of desire" or kamarupa in Sanskrit). These bodies are granted by Nature and are subject to Nature's mechanical laws. When ordinary people fall asleep and dream, they leave their physical bodies and travel in their lunar Astral and Mental Bodies.

The solar Astral, Mental and Causal Bodies, on the other hand, must be constructed by entering into initiation and practicing sexual alchemy (tantra) with conscious willpower. These superior solar bodies are not subject to Nature's laws. They are also known as the Wedding Garment (Christianity), the Merkabah (Kabbalah), To Soma Heliakon (Greek), and Sahu (Egyptian). 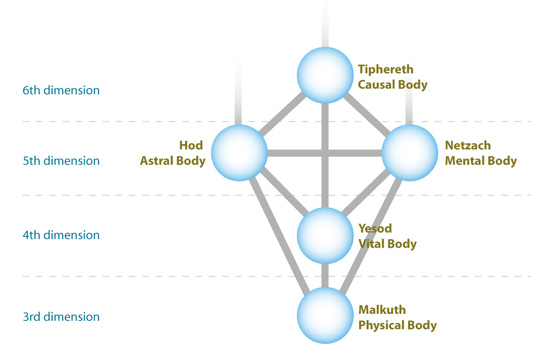 What is the Astral Body?

The Astral Body corresponds to the fifth dimension and the sphere of Hod on the Tree of Life.

The time has arrived in which we have to comprehend that the double (which was registered in some photographic films and which was analyzed by the Colonel Rochas) is not the true Astral Body.

The double has been, is, and shall always be of a molecular, lunar, and protoplasmatic nature.

Ordinary human beings (except those very few rare cases) are always born with the famous Lunar double and never with the Solar Astral Body.

Intellectual animals live inside their physical body; yet, during normal sleep and also after death, they live outside of it. Thus, when outside of their physical bodies, they wander around dressed with their molecular double. Pseudo-esoteric and pseudo-occultist people have named the molecular body "Astral Body." Nonetheless, such a molecular body is not the Astral Body. - Samael Aun Weor, The Doomed Aryan Race, chapter 30

What is the Mental Body?

The Mental Body corresponds to the fifth dimension and the sphere of Netzach on the Tree of Life.

The complete development of our Superior Mental Center can be achieved only through a legitimately Solar type of Mental Body.

Ordinary people only have Lunar Mental Bodies. Such a protoplasmic body is of an animal nature.

The Inferior Manas or Concrete Mind about which Theosophy speaks so abundantly is only the lunar mind.

The fact that the intellectual animal has an animal mind is not a marvel, since the irrational beasts also have it. What happened is that the latter never gave an intellectual form to their minds; that is the only difference.

What is the Causal Body?

The Causal Body corresponds to the sixth dimension and the sphere of Tiphereth on the Tree of Life.

To possess a Causal Body or Body of Conscious Will is equivalent to converting oneself into a Mahatma, into an adept of the White Lodge.

The will of Christ can only perform the will of the Father, on Earth as it is in Heaven. Father if it is possible, pass this chalice away from me, but not my will but Thine be done.

The figure of Ecce Homo has a crown not only to remind us of the historical event related with the martyrdom of our adorable Jesus Christ, but also to indicate the necessity of building the Solar Body of the Christ-Will.

It is lamentable that inexpert clairvoyants confuse the Buddhata (which is deposited within the Lunar Protoplasmic Bodies) with the authentic and genuine Causal Body or Solar Body of the Conscious Will.

On a certain occasion, at the table of a banquet, my real Being, the Innermost, took a seat with two other people; the first was my Buddhi, my Valkyrie, the other person was me, myself, the Human Soul dressed with the Causal Body.

This lesson was taught onto me by my real Being Samael in the Causal World or World of Conscious Will. - Samael Aun Weor, The Doomed Aryan Race, chapter 32