Revolution of the Dialectic

The Corpses of the Ego

Upon disintegrating the corpses of the ego, we must direct all of our efforts in not creating physical bodies again because they are vulnerable and exposed to aging and death.

Indubitably, physical bodies are created because of Karma.

People of this day and age are not profound; they rather like being superficial. They believe themselves capable of laughing at all civilizations. This is because they lack psychological work.

Self-concept is based on the experience of one’s own form of thinking.

Gurdjieff is incipient in his teachings.

Krishnamurti has self-concepts because he has never read anything written by anyone.

When self-authority is not possessed within, imbalance and rupture with the harmony of the cosmos occurs.

How can one possess self-authority if one is not lord of oneself?

Self-action can only be possible when one has the Being within.

The Philosophical Stone, self-concept, self-action, and self-authority are only possible when one disintegrates the corpses of the ego within the psychological atomic infernos. 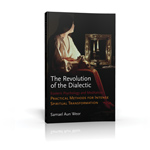 This chapter is from Revolution of the Dialectic (1983) by Samael Aun Weor. The print and ebook editions by Glorian Publishing (a non-profit organization) are illustrated to aid your understanding, and include features like a glossary and index. Buy the book, and you benefit yourself and others.

By purchasing a print edition of "Revolution of the Dialectic", you get a high quality, permanent source of profound knowledge, you help us print more books, keep this website online, and allow us to give free books to prisoners, churches, libraries, and more.
Pick a Bookseller
Share This Page: