The Pentagram expresses the dominion of the Spirit over the elements of Nature. We can command the elemental creatures which inhabit the regions of fire, air, water, and earth with this magical sign.

Demons tremble and run away terrified in the presence of this terrible symbol. 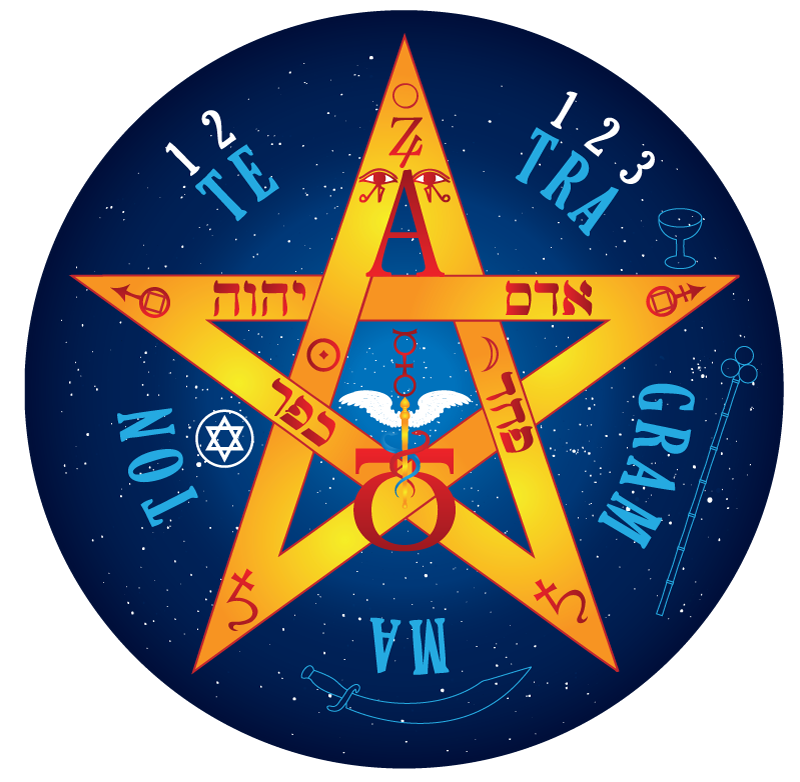 The Pentagram, with its superior ray aiming up, forces the tenebrous ones to scatter.

The Pentagram, with its superior ray aiming down, serves in order to call upon the tenebrous ones.

When the superior ray of the Pentagram is aiming up towards the sky, it represents Christ.

When the two inferior points of the Pentagram are aiming up towards the sky, it represents Satan.

The Pentagram represents the human being in its entirety.

The Pentagram with its superior ray aiming upwards is the Master.

The best electrum is a flaming star composed of the seven metals which correspond to the seven planets.  These are the following: silver for the Moon, quicksilver for Mercury, copper for Venus, gold for the Sun, iron for Mars, tin for Jupiter, and lead for Saturn.

The flaming star may also be drawn on a very white lambskin to be kept inside the bedroom.  It can also be used at the threshold of the nuptial chamber. Thus, this is how we can prevent the tenebrous ones from entering our bedroom.

We may also draw the Pentagram on glass, for this terrorizes ghosts and demons.

The Pentagram is the symbol of the Universal Word of Life.

The Pentagram can be made to shine instantaneously when uttering certain secret mantras.

Within the Gopala-tapani and Krishna Upanishads, we have found written the mantras which have the power to instantaneously form the terrible flaming star within the Astral Plane, the sight of which makes demons scatter in terror.  These mantras are five, namely:

The tenebrous ones from the Eighteenth Arcanum scatter in terror, because the flaming star is instantaneously formed when vocalizing these mantras.  These demons violently attack the initiate who is working in the Great Work.  Thus, the devotees of the Perfect Matrimony have to wage tremendous battles against the tenebrous ones.  Each vertebra of the spinal column represents terrible battles against the black magicians.  They struggle in order to deviate the student away from the path of the razor’s edge.

The powerful mantra mentioned above has three perfectly defined stages.  On chanting KLIM, which the occultists of India call the “seed of attraction,” we provoke a flow of Christic energy which instantaneously descends from the world of the Solar Logos in order to protect us; thus, a mysterious door is then downwardly opened.  Afterwards, by chanting the three following parts of the mantra, the Christic energy is infused within the one who chants them.  Finally, by means of the fifth part, the one who has received the Christic energy can radiate it with tremendous force in order to defend himself from the tenebrous ones.  They then scatter away in terror.

The word always crystallizes in geometric lines.  This is demonstrated by magnetic tapes.  When speech is recorded on a casette, each letter crystallizes into geometrical figures.  Afterwards, it is sufficient to make the tape vibrate in the tape recorder in order for the speech to be repeated.  God geometrizes.  The word is shaped with geometric forms.  The mantras formerly cited by us have the power to instantaneously form the flaming star within the suprasensible worlds.  This kind of star is a vehicle of Christic force.  This kind of star represents the Word.

Everyone who works in the flaming forge of Vulcan can defend themselves with these powerful mantras. These mantras must be chanted syllable by syllable. One can conjure the demons who control the possessed ones with these mantras.

It is urgent to learn how to instantaneously create the flaming star.  With these mantras we can create that star in order to combat the tenebrous ones.

The learned ignoramuses who are so numerous in this century may laugh like idiots at what they do not know.  These people suppose that our mantras are words without any value whatsoever and that their energy is lost in space.  They ignore the internal value of words.  The principle substance of the word is unknown to them. This is why they laugh at our mantras.

An external and an internal value exist in every word.  It is precisely the internal value that is the principle substance of the word.  The internal element of the word is not comprised within our tridimensional space.  The internal element of the word must be sought in superior space with dimensions superior to ours.  Our space appears in front of us only as a part of the superior space.  Therefore, in conclusion, we do not know the space in its whole.  Presently, humans only know a small part which can be measured in terms of longitude, latitude, and height.

The internal element of the word is formed geometrically within the superior dimensions of space. This is how, with the mantras given in this chapter, we can undoubtedly form a pentagonal star, invisible to the physical eyes but perfectly visible to the sixth sense.

Scientists do not know anything about the fourth dimension of matter in space.  They do not know anything about the hypergeometry of that type of fourth-dimensional space.  To define space as the form of matter in the universe is to suffer the most grave conceptual deficiency, which is to introduce the concept of matter, that is to say, the unknown, because indeed, matter continues to be the unknown.  All of the attempts in order to attain a physical definition of matter only leads to a dead end: X = Y, and Y = X.  This is the physicists’ blind alley.

The psychological definitions of matter also lead to the same dead end.  A sage said, “Matter (as a force) does not present us any difficulty at all.  We understand all about it, because of the very simple reason that we have invented it... When we speak of matter we think of sensible objects.  However, what is difficult for us to deal with is the mental variation of concrete but complex facts...

“Therefore, strictly speaking, matter exists only as a concept... to tell the truth, the character of Matter, (even when treated just as a concept) is so obscure, that the majority of people are unable to tell us exactly what they mean by it.”

Indeed, no one really knows what matter is.  Nonetheless, the conservative and reactionary school of materialistic positivism is founded on that concept.

Even though physicists may not like the following assertion, we have to state that “matter” and “energy” are words which are officially accepted in order to designate a long series of complicated facts, even when the substantial origins of them are unknown to present science.  Who has seen matter?  Who has seen energy?  We only see phenomena.  No one has seen matter independent of substance.  No one has seen energy separate from movement. Therefore, this factually demonstrates to us that matter and energy are only abstract concepts. No one sees matter separated from object. No one sees energy separated from movement.  Matter and energy separated from things and phenomena are a mystery for the human being.  The human being is ninety-seven percent subconscious and only three percent conscious.  The human being dreams with the phenomena of Nature and calls them matter, energy, etc.

At the dawn of life, the Army of the Voice celebrated the rituals of fire by singing in the sacred language.  The great Word crystallized into geometrical figures that were condensed by means of the raw matter of the Great Work, thus, giving origin to all the phenomena of Nature.

The world and the consciousness are indeed the result of the Word. Tridimensional space is a property of our material perception. When we improve the quality of representations, the quality of perceptions also improves. Then, we enter into the superior dimensions of space where the tridimensional world no longer exists. This remains in our memory only as a dream.

Indeed, the world that is presented to our consciousness is only the mechanical aspect of all those combined causes which give origin to a definite series of sensations.

The principle cause of all existence is found beyond the world and the consciousness.  This principle is the Word.  It is the Word that creates the worlds.

The same was in the beginning with God.

All things were made by him; and without him was not anything made that was made.

In him was life; and the life was the light of men.

And the light shineth in darkness; and the darkness comprehended it not.

The Word is completely symbolized by the five pointed star.  This is the flaming star.  We can defend ourselves against the tenebrous ones with it.  The columns of Angels and demons tremble in the presence of this marvelous star.

By purchasing a print edition of "Perfect Matrimony", you get a high quality, permanent source of profound knowledge, you help us print more books, keep this website online, and allow us to give free books to prisoners, churches, libraries, and more.
Pick a Bookseller
Share This Page: