Happiness, Music, Dance, and the Kiss

Only love and wisdom should reign in the homes of Gnostic brothers and sisters.  In reality, humanity confuses love with desire and desire with love.  Only great Souls can and know how to love.  In Eden, perfect men love ineffable women.  In order to love, one must first be.  Those who incarnate their Soul truly know how to love.  The “I” does not know how to love.  The demon “I” that today swears love is replaced by the demon “I” that does not feel like loving.  We already know that the “I” is plural.  The pluralized “I” is really a legion.  This whole succession of “I’s” is in constant battle.  It is stated that we have but one mind; nevertheless, we Gnostics affirm that we have many minds.  Each phantasm of the pluralized “I” has its own mind.  The “I” that kisses and adores his beloved wife is replaced by the “I” that hates her. One must first be in order to love.  The present human being is not being.  Whosoever has not incarnated his Soul is not being.  The present human being has no real existence yet.  A legion of demons speak through the human’s mouth.  These are demons who swear love, demons who abandon their beloved, demons who hate, demons of jealousy, anger, resentment, etc.

Nevertheless, despite former statements, the intellectual animal mistakenly called human being has incarnated the Essence, which is a fraction of his human soul, the Buddhata.  The Essence knows how to love.  The “I” does not know how to love.  We must forgive the defects of our beloved because these defects are of the “I.”  Love is not to blame for disagreements.  The “I” is the guilty one.  The homes of Gnostic initiates must have a background of happiness, music and ineffable kisses.  Dance, love, and the joy of loving strengthen the embryo of the Soul that children have within.  Thus, this is how Gnostic homes are a true paradise of love and wisdom.

Liquor and fornication must be banished from the bosom of Gnostic homes.  However, we must not be fanatics.  Whosoever is incapable of handling one drink at a social gathering is as weak as someone who cannot control his liquor and gets drunk.  Fornication is something entirely different.  Fornication is unforgivable.  Whosoever ejaculates the seminal liquor is a fornicator. Thus, for those who reach orgasm, for fornicators, the Abyss and Second Death await.

The human being can be a part of everything but should not be the victim of anything.  He must be the king not the slave.  Someone who has had a drink has not committed a crime, but the one who becomes a slave and victim of that drink has committed a crime.  The true master is a king of the Heavens, of the Earth and of the Infernos.  The weak one is not king.  The weak one is a slave.

The initiate only unites sexually with his spouse in order to practice Sexual Magic; wretched is the one who unites with his spouse in order to spill the semen.  The initiate does not experience the feeling of death that fornicators feel when they lose their semen.  Man is one half and woman is the other half.  During the sexual act they experience the joy of being complete.  Those who do not spill the semen preserve this joy eternally.  In order to create a child it is not necessary to spill the semen.  The spermatozoon that escapes without spilling the semen is a selected spermatozoon, a superior kind of spermatozoon, a totally mature spermatozoon.  The result of such a fertilization is truly a new creature of an extremely high order.  This is how we can form a race of Super-Men.

It is not necessary to spill the semen in order to engender a child.  Imbeciles like to spill the semen.  Gnostics are not imbeciles.  When a couple is united sexually, clairvoyants often see a very bright light enveloping the couple.  Precisely in that moment the creative forces of Nature serve as a medium for a new being.  When the couple lets itself go in carnal passion, and later commits the crime of spilling the semen, these luminous forces withdraw, and in their place, satanic forces penetrate, luciferic forces of a bloody red color that bring quarrels, jealousy, adultery, weeping and desperation to the home.  That is how homes that could be a heaven on Earth become true infernos.  People who do not spill their semen, retain and accumulate for themselves peace, abundance, wisdom, happiness, and love.  Arguments within homes can be eliminated with the key of Sexual Magic; this is the key to true happiness.

During the act of Sexual Magic, couples charge themselves with magnetism; they mutually magnetize each other. In the woman the pelvis emanates feminine currents, while her breasts give off masculine ones.  In the man the feminine current emanates from the mouth, and the masculine one from his virile member.  All of these organs must be well excited through Sexual Magic in order to give off and receive, transmit and retrieve vital magnetic forces that increase extraordinarily in quantity and quality.

In the home of Gnostic initiates, the objective of delightful dances, joyful music, and ardent kisses, where couples come into intimate sexual contact, is the mutual magnetization of man and woman. The magnetic power is masculine and feminine at the same time.  The man needs the fluids of his wife if he truly wishes to progress, and the woman inevitably needs the fluids of her husband in order to develop all of her powers.

When a couple mutually magnetizes each other, daily business progresses and happiness makes a nest in the home.  When a man and woman unite, something is created.  Scientific chastity allows the transmutation of the sexual secretions into light and fire.  Every religion that degenerates preaches celibacy.  Every religion at its birth and its glorious splendor preaches the path of the Perfect Matrimony. Buddha was married and established the Perfect Matrimony.  Unfortunately, after five hundred years, the prophecy made by the Lord Buddha that his Dharma would be exhausted and the Sangha would divide into dissident sects was precisely fulfilled.  That was when Buddhist monasticism and hatred of the Perfect Matrimony was born. 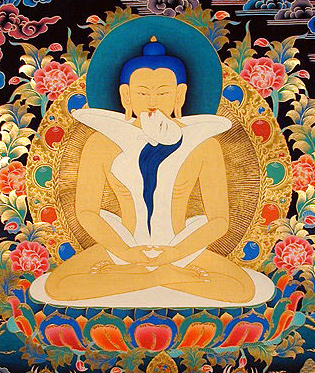 Samantabhadra, the “first buddha,” (Adi-buddha), the primordial perfection of all enlightened qualities, and the guru of all buddhas.

Jesus the Divine Savior brought Christic esotericism to the world.  The Adorable One taught his disciples the path of the Perfect Matrimony.  Peter, the first pontiff of the Church, was a married man.  Peter was not celibate.  Peter had a wife.

Unfortunately, after six hundred years, the message of the Adorable One was adulterated, and the Church of Rome returned to the dead forms of Buddhist monasticism, with its cloistered monks and nuns who mortally hate the path of the Perfect Matrimony.  That is how after six hundred years of Christianity another message about the Perfect Matrimony became necessary. Then came Mohammed, the great preacher of the Perfect Matrimony. Naturally, as always, Mohammed was violently rejected by infrasexual men who hate women. This disgusting society of enemies of women believe that only by compulsory celibacy can one reach God.  This is a crime.

Sexual abstinence as preached by infrasexual people is absolutely impossible. Nature rebels against that type of abstention.  Nocturnal emissions is the outcome of celibacy that inevitably ruins the organism. Every person who sexually abstains, suffers nocturnal emissions.  A cup that fills up will inevitably overflow.  The luxury of sexual abstention is only possible for those who have already reached the Kingdom of the Super-Man. These people have already transformed their organisms into mechanisms of eternal sexual transmutation. They have already trained their glands with Sexual Magic.  They are human-Gods.  They are the result of many years of Sexual Magic and of rigorous education in sexual physiology.

The initiate loves great classical music and feels repugnance for the infernal music of vulgar people.  Afro-Cuban music awakens the lowest animal instincts of the human being.  The initiate loves the music of the great composers.  For example, The Magic Flute by Mozart reminds us of an Egyptian Initiation.  There is an intimate relationship between the Word and the sexual forces.  The Word of the great Master Jesus had been Christified by drinking the wine of light of the Alchemist in the chalice of sexuality.

The Soul communes with the music of the spheres when we listen to the nine symphonies of Beethoven, or the compositions of Chopin, or the divine Polonaise of Liszt.  Music is the Word of the Eternal One. Our words must be ineffable music; thus, we sublimate the creative energy to the heart.  Disgusting, filthy, immodest, and vulgar words have the power to adulterate the creative energy, changing it into infernal powers.

In the mysteries of Eleusis, sacred dances, dances in the nude, ardent kisses, and sexual union made human beings into Gods.  At that time, it would not have occurred to anyone to think in perversities, but only in holy and profoundly religious matters.

Sacred dances are as ancient as the world itself and have their origin in the dawn of life on Earth. Sufi dances and Dervish dancers are tremendously marvelous.  Music should awaken in the human organism so that the Word of Gold may be spoken.

The great rhythms of Mahavan and Chotavan, with their three eternal tempos, sustain the steady motion of the universe.  These are the rhythms of the fire.  When the Soul floats delightfully in sacred space, it must accompany us with its song because the universe is sustained by the Word.

The home of Gnostic initiates must be full of beauty.  The flowers that perfume the air with their aroma, beautiful sculptures, perfect order and cleanliness make of each home a true Gnostic sanctuary.

The mysteries of Eleusis still exist in secrecy.  The great Baltic initiate, Von Uxkul, is one of the most exalted initiates of this school.  This great initiate practices Sexual Magic intensely.  We must clarify that Sexual Magic can only be practiced between husband and wife.  The adulterer and the adulteress inevitably fail.  You can only be married when there is love.  Love is Law but it must be conscious love.

Those who use this knowledge of Sexual Magic in order to seduce women are black magicians who will fall into the Abyss, where wailing and the Second Death await them.  The Second Death is thousands of times worse than the death of the physical body.

We call forth urgently to the maidens of the world, to the innocent women.  We warn them that they can only practice Sexual Magic when they have their husband.  They must guard themselves against all those sly foxes who go around seducing naive damsels with the pretext of Sexual Magic.  We give you this warning so that you do not fall into temptation.

We also call forth a warning to the unredeemed fornicators who inhabit the Earth, that before the eyes of the Eternal it is useless to try to hide.  Those poor women who utilize this knowledge as a pretext in order to satisfy their lust and to lie in beds of pleasure will fall into the Abyss where all that awaits them is great weeping and the gnashing of teeth.

We speak clearly so that we will be understood.  Go back, profane and profaners.  Sexual Magic is a double-edged sword.  It transforms the pure and virtuous into Gods, and it injures and destroys the wicked and impure.

By purchasing a print edition of "Perfect Matrimony", you get a high quality, permanent source of profound knowledge, you help us print more books, keep this website online, and allow us to give free books to prisoners, churches, libraries, and more.
Pick a Bookseller
Share This Page: