The Magisterium of Fire

Beloved souls who sincerely study this message of this cosmic festival of Christmas 1967, the time has come to profoundly comprehend what the magisterium of fire truly is.

It is urgent to descend into the ninth sphere, into the somber well that is the very depth of the whole universe, in order to work with the fire and the water, the origin of worlds, beasts, human beings, and gods. Every authentic white initiation begins there.

But let those melodious maidens from ancient times (by whose aid Amphion lay down the foundation of Thebes) assist me with this chapter, so that with truth, my style will not detract from the nature of this matter.

You who descend into the obscure well (sex), you who are going to work in the magisterium of fire, you who want to hold the scepter of kings, the rod of Aaron, the staff of Brahma, in your dexterous hand, remember at every moment the Dantesque warning:

“Look how thou walkest. Take good heed thy soles do tread not on the heads of thy poor brethren.” –Dante, Inferno 32

That frozen lake whose frozen surface seems as if it were made out of a liquid, flexible, malleable glass: this is the intimate, secret aspect of the semen within the sexual glands of the lost souls .

Within the ninth sphere of hell, Dante found those weeping and livid shadows submerged within the ice, all the way up to that mysterious area where the sexual organs are found.

Such a depressing fate appears in lunar people; their faces held downward, their mouths exhaling the cold, and their terrene eyes expressing the pain of their hearts with frozen tears.

Only the fire can melt the frozen pools, those pools where the lost ones live.

The secret fire of alchemists is the Kundalini ; it is the serpentine or annular power working within the body of the ascetic.

Indeed, this is an electrical, igneous, occult, or Fohatic power. It is the great, pristine, marvelous, and astonishing force that underlies every organic or inorganic matter.

Undoubtedly, this is an electronic, spiritual type of force, a creative power that, when awakened to action, can easily heal or kill, create, or destroy. Now you will comprehend the reason for the Dantesque warning to all those who dare to descend into the ninth sphere (sex).

In reference to this living and terribly divine fire, the Rosicrucian Gnostics state:

“The potentialities in nature are aroused by the action of the secret fire, assisted by the elementary fire. The secret fire is invisible, and is contained within all things. It is the most potential and powerful fire, with which the external visible fire cannot be compared. It is the fire with which Moses burned the golden calf, and that which Jeremiah hid away, and which seventy years after was found by the knowing ones, but which, by that time had become a thick water. (2 Maccab. I. and II.)

“Without the possession of this magic fire, no alchemical process can be accomplished, and therefore it is recommended in the “Secret Symbols of the Rosicrucians,” that the student of Alchemy should above all seek for the fire.” —Franz Hartmann

The authentic and genuine Rosicrucian school does not exist in the physical world. In the name of truth, I have to state that I have the high honor of being a member of the Rosicrucian Temple of Kummenes in the internal worlds.

The four alchemical rules are:

1. “Dominate the animal nature.” Remember that without Thelema (willpower) the weak and cowardly intellectual beasts fail in the great work.

2. “First know, then act.” Remember that real knowledge is only acquired through profound meditation.

3. “Use no vulgar processes. Use only one vessel, one fire, one instrument.” Remember that this signifies that Maithuna (sexual yoga) must be practiced only between a man and a woman who are legitimately constituted as spouses. Those who practice Maithuna to perform adultery will enter into the submerged devolution within the infernal worlds.

“Woe unto the Samson of the Kabbalah if he permits himself to be put asleep by Delilah! The Hercules of science who exchanges his royal scepter for the distaff of Omphale will soon experience the vengeance of Dejanira, and nothing will be left for him but the pyre of Mount Oeta, in order to escape the devouring folds of the coat of Nessus.”

The symbolic coat of arms of Aracena, Spain, made up by Don Benito himself or by his Templar antecessors, is a magisterial, heraldic compendium that encloses in itself the whole magisterium of fire. 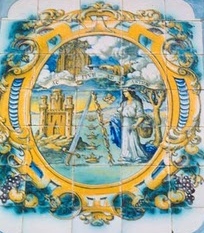 Actually, this magisterial compendium (coat of arms) is formed by three sections which are separated by what seems to be a Templar Tau. The Tau (T) is formed by a horizontal throne of clouds that can be climbed up by the vertical pole that forms that Tau; in turn, the vertical pole is formed by one symbolic sword and one symbolic club which are united by five rungs or strides that are made up of a number of princes’ crowns, mundane crowns, passionate crowns, vain crowns. The crowns must be trampled upon by the aspirant in order to climb up to that heavenly throne. Above that throne, amidst the clouds, only a hermetically sealed door can be seen. Undoubtedly, this is a porta-coeli (heavenly door); a mysterious hand armed with a key goes towards the door. The key symbolizes the clue keeper of the great secret of initiation into the mysteries of the kingdom, which is behind that mystic door.

The section of the left shows a marvelous embattled tower similar to the section of the Cardenalist coat of arms of Bishop Moya. A splendid torrent of living water (ens seminis) resplendently flows from that tower.

The section of the right shows the delectable Elysian Fields with the Goddess Eve (Vesta, Hestia, or the Earth herself) crowned with flowers and fruits under a paradisiacal tree.

Across this marvelous coat of arms gloriously shines a Latin phrase that says, “Ac itur ad astra,” meaning, “This is the way that leads to heaven.”

The entire coat of arms is the symbol of the sexual Tau with its horizontal pole formed by the clouds of mystery. The clouds hide the narrow path that lead to the truth, and its vertical pole is the difficult ladder that rests on the flaming sword and on the scepter or club, symbol of dominion over our passions.

The five prince-like crowns that are placed in a manner of rungs (which we must trample upon in order to climb this ladder) reminds us that in the ascension through all the esoteric degrees of the five initiations of fire, we must trample upon any ostentation, any human ambition, until by climbing the ladder, we reach the closed door (porta-coeli) whose magical key can only be given to us by a master.

On the left and right of the vertical pole of the sexual Tau stand the Castle of the Saved Jewel (speaking chivalrously) from which the splendid torrent of living water (ens seminis) resplendently flows to fecundate the world — “ego sut resurrectio er vita” — and the Elysian Fields where Ceres the mother Earth appears crowned with flowers and fruits.

The symbolic coat of arms of Aracena is absolutely sexual. The clue of any power is found in the connection of the phallus and the uterus.

The electronic solar fire has seven degrees of power. There are seven serpents: two groups of three, plus the coronation of the seventh tongue of fire that unites us with the One, with the Law, with the Father.

To raise the five fundamental serpents by means of Maithuna (sexual yoga) is basic, because the two superior serpents are always raised.

When we carefully observe any solar human, we can then verify that each one of the seven serpents is raised in the medullar canal of his respective vehicles.

The first serpent corresponds to the physical body. The second serpent corresponds to the vital body or Hindustani Lingam Sarira. The third serpent victoriously rises through the Sushumna canal of the authentic and genuine astral body. The fourth serpent victoriously rises in the authentic solar mental body. The fifth serpent rises through the medullar canal of the true solar body of conscious will.

By purchasing a print edition of "Narrow Way", you get a high quality, permanent source of profound knowledge, you help us print more books, keep this website online, and allow us to give free books to prisoners, churches, libraries, and more.
Pick a Bookseller
Share This Page: