If we carefully observe the symbolic caduceus of Mercury, we will discover with mystical astonishment that the two serpents entwined around its holy pole form the holy eight.

Ida and Pingala entwined around the dorsal spine are indeed the perfect eight. Joyful be the one who comprehends the profound mysteries of the holy eight.

The number eight placed horizontally is the sign of the infinite ∞. The eight has the image of a clepsydra. The succession of time in different cycles can be indicated with the eight; each cycle (or circle of the number eight) is without a doubt the continuation of the other.

The spiral of life exists within the holy eight. The evolving and devolving processes are always performed in a spiral form.

“The fire of Phlegethon and the water of Acheron cross within the ninth sphere, forming the symbol of the infinite.” —Hilarion IX 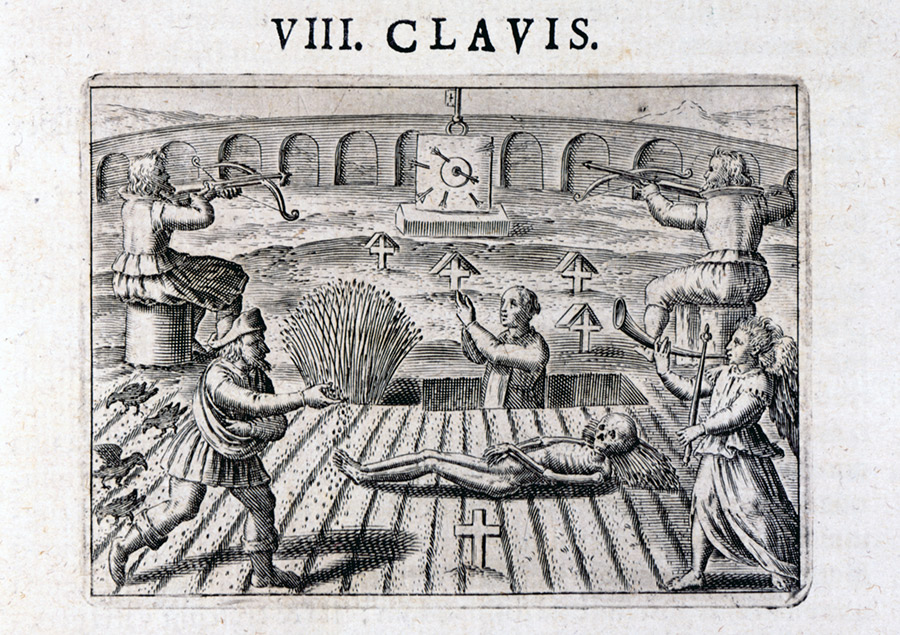 The double current with which one must work in the great work (in order to attain the realization of the Innermost Self) is wisely represented in the mysterious Eighth Key of Basil Valentine. This is a variation of the caduceus, and naturally it symbolizes the Mercury (☿) of secret philosophy; the marvelous properties of sulfur (????) and the productive fecundity of salt (O) are united extraordinarily within this Mercury. Thus, this is how the mystical connubial of two luminaries is performed in three worlds.

The superior circle of the holy eight is a living representation of the human brain. The inferior circle is hidden within mystery, in order to symbolize the cup of Hermes within which the Mercury of secret philosophy, the ens seminis is contained.

It has been wisely stated onto us that the heart-temple is precisely situated at the point where the fire of Phlegethon and the water of Acheron cross, forming the sign of the infinite.

The struggle is terrible; brain against sex, sex against brain, and the most terrible is that of heart against heart. You know this.

The sign of the infinite, within which the brain, heart, and sex of the genie of the Earth is represented, is discovered by every esotericist within the interior of the planetary globe in the ninth circle.

The bodies of all creatures that live upon the Earth, from the most insignificant microbe to the human being, are found organized upon this archetypical base of the holy eight.

The eight Kabirs [Cabiri, Kabeiroi], those powerful, Semitic, ineffable, and terribly divine gods (who were later worshiped by the Greeks and Romans, and whose principal sanctuary was found always in Samothrace) are intimately related with the holy eight, with the sacred symbol of the infinite.

The eight Kabirs are the children of Ephestus or Vulcan and an adorable daughter of Proteus. They were born from the sacred fire (that manifests itself within the terrible profundities of the Earth) by the forging action of Proteus upon that universal substance that naturally has the property of taking any form.

These eight Kabirs are the fundamental intelligences of this nature. They are the extraordinary regents of the great mysteries of life and death.

According to a very ancient esoteric tradition, one of those eight Kabirs was assassinated by one of his own brothers; however, later on he was resuscitated with the help of Hermes. This reminds us of the symbolic death and resurrection of Hiram, Osiris, and Jesus that must be comprehended in depth by the M. M.

The holy eight is therefore the base and the living foundation of the great work. If someone violates the scientific rules and principles contained within the symbol of the infinite, they will totally fail in the great work.

Whosoever wants to successfully work in the magisterium of fire must never spill the cup of Hermes (must not spill the semen) because they will fail in the great work.

The double current of fire and water must be exactly crossed in the ninth sphere in order to form the symbol of the infinite.

If the alchemist loses the water, meaning if the alchemist commits the error of ejaculating the semen, then the crossing of the two currents is impossible.

In the hard battle of brain against sex and sex against brain, the brain loses the battle most of the time.

The intimate battles of the heart usually lead the alchemists towards final failure.

A Greek fable tells us the tale of Sisyphus the Colossus, who by carrying a big boulder on his back intends once again to reach the summit of the mountain. However, his attempts always fail because just when he is about to place the stone at the right point of his desired goal, the stone always falls into the depths of the precipice.

Whosoever spills the cup of Hermes once in a while, whosoever at times does not spill the semen, and then later comes to spill it, violates the law of the holy Kabirs and converts himself into a gray tantric adept.

In this world of Samsara, we have evasions and false justifications for many things. Thus, this is how gray tantra also has its followers and its doctrine.

Any esotericist traveler who proposes to perform an in depth investigation among the secret schools of the Asian continent will verify for himself the crude and painful reality of gray tantra.

Tantra is found throughout Asia and is very abundant in the diverse schools of Theravada (Hinayana), Mahayana, Ch’an, Zen, Tantric Buddhism, etc.

The intellectual animals always find evasions and false justifications for all of their weaknesses. Therefore, it does not surprise us that even within these self-exalted and dignified schools of Zen, Tantric Buddhism, and others, much ballast of gray tantra is found.

It is lamentable that many disoriented instructors from those Asian schools offer valuable sexual yoga techniques and practices without ever comprehending the fundamental aspect of tantra, that being the urgent necessity of never committing the crime of spilling the semen during your whole life.

To prolong the coitus with the sole objective of enjoying animalistic pleasure and without any regard for seminal ejaculation is undoubtedly gray tantra that can easily degenerate into black tantra.

Fortunately, there is a lot of white tantra in Taoism, in Hindu and Tibetan tantra, in pure Zen, and in the original Ch’an.

In old Europe there were some sects of Persian origin (such as the famous Manicheans) who practiced white tantra or coitus interruptus; they called it Karezza, which is a word with Persian origins.

The alchemists who work with all the principles and laws of the holy eight Self-realize in depth, and they convert themselves into hierophants.

Every authentic esotericist knows very well that the symbol of the infinite is equal to the pentalpha, the famous star of five points.

The work with the philosophical stone, the eight steps of yoga, are exclusively for those who respect the principles and laws of the holy eight, and never those of the henchmen of black or gray tantra.

By purchasing a print edition of "Narrow Way", you get a high quality, permanent source of profound knowledge, you help us print more books, keep this website online, and allow us to give free books to prisoners, churches, libraries, and more.
Pick a Bookseller
Share This Page: