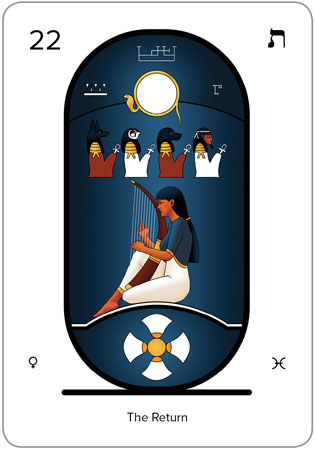 In the waters of life is the swastika cross symbolizing the Muladhara chakra of four petals.

A woman, who represents the truth, plays a harp, plucking the sexual lyre of nine chords until she finds the key note.

In the superior part of the plate are the four gods of death—Mestha, Hapi, Duamutef, and Kebhsennuf—who represent the four elements—earth, fire, water, and air—and the four mysterious animals of Sexual Alchemy.

Above the four gods of death we find the sacred serpent that illuminates the sphere of Ra, the serpent that was granted to the Osirian adept, the Son of the Light.

The Twenty-second Arcanum is the Crown of Life, the return to the light, the incarnation of the truth in us.

Beloved disciples, you need to develop each of the twenty-two major arcana of the Tarot within yourselves. You are imitatus, or rather, one who others have put on the path of the razor’s edge. Exert yourself to become adeptus, one who is the product of one’s own deeds, the one that conquers science on their own, the child of one’s own work.

One must conquer the degree of adeptus by departing from the animal state and by acquiring consciousness.

Gnosis teaches three steps through which every one who works in the flaming forge of Vulcan has to pass. These are:

It happens that curious people who enter into our Gnostic studies want immediate illumination, astral projection, clairvoyance, practical magic, etc., and when they do not achieve this, they leave immediately. No one can achieve illumination without having been previously purified. Only those that have achieved purification and sanctity can enter into the hall of illumination. There are also many students that enter into our studies just for pure curiosity. They want to be wise immediately. Paul of Tarsus said, “We speak wisdom among them that are perfect.” [1 Corinthians 2:6] Only those who achieve the third step are perfect. Only among them can divine wisdom be spoken of.

In the ancient Egypt of the Pharaohs, among the occult Masons, the three steps of the path were:

The candidate would remain in the degree of apprentice for seven years and sometimes even more. Only when the hierophants were completely sure of the purification and sanctity of the candidate could he or she then pass to the second step.

Really, only after seven years of being an apprentice does illumination commence.

The Crown of Life is our resplendent Dragon of Wisdom, our internal Christ.

The Holy Trinity emanates from the Ain Soph, the interior Atomic Star that always smiles upon us.

The Twenty-second Arcanum when added Kabbalistically gives us:

The result is the Holy Four, the mysterious Tetragrammaton; Iod Hei Vav Hei; man, woman, fire, and water; man, woman, phallus, and uterus. Now we comprehend why the Twenty-second Arcanum is the Crown of Life.

The Apocalypse says, “Fear not of those things which thou shalt suffer. Behold the devil shall cast some of you into prison, that ye shall have tribulation ten days. Be thou faithful unto death and I will give thee a Crown of Life.” [Revelation 2:10]

The prison that is mentioned is the prison of pain. The ten days are the tribulations that occur while one is submitted to the wheel of return and karma.

One who receives the Crown of Life is liberated from the wheel of return, recurrence, and karma.

The Crown of Life is the three-unity. It has three aspects:

The one who is faithful until death will receive the Crown of Life.

In the banquet of the Lamb, the faces of all of the Holy Ones that have incarnated Him shine as suns of love. The immaculate white tablecloth is dyed with the royal blood of the immolated Lamb. He that hath an ear let him hear what the Spirit saith unto the churches. He that overcometh shall not be hurt of the Second Death. [Revelation 2:11]

When we receive the Crown of Life, the Verb is made flesh within each one of us.

Every Saint that reaches the Venustic Initiation receives the Crown of Life.

And the Word was made flesh, and dwelt among us, (and we beheld his glory, the glory as of the only begotten of the Father) full of grace and truth. - John 1:14

We need to resurrect the Lamb within ourselves.

We need the Easter Resurrection.