"You too, Caieta, nurse of Aeneas, have given by your death eternal fame to our shores; the honor paid you there even now protects your resting-place, and your name marks the place where your bones lie, great Hesperia, if that glory is of any value.

"Good Aeneas duly performed the funeral rites and heaped up a barrow for the tomb, and when there was calm on the seas, he set sail and left the port behind him. A fair breeze kept blowing as night came on, the white moon lit their course and the sea shone in its shimmering rays. Keeping close inshore, they skirted the island of Calixto where Circe, the daughter of the Sun, lives among her riches... with her irresistible herbs, the savage goddess had given to men the faces and hides of wild beasts."

The legend of the centuries states that Neptune, Lord of the sea, powerful God, protector of devout Trojans, kept them from sailing into that harbor or coming near the deadly shore where the frightful enchantress dwelled, by filling their sails with favorable winds...

Let us remember the case of Ulysses, cunning warrior, destroyer of citadels, the one who penetrated into the abode of Circe.

The old scriptures state that the warrior halted at the mysterious portals where the fair-tressed goddess lived. There he stood and called aloud, and the goddess heard his voice, and she came forth and invited him to enter.

In The Odyssey, Ulysses himself tells of his adventure:

I went with her, heavy at heart. So she led me in and set me on a chair with studs of silver, a goodly carven chair, and beneath was a footstool for the feet. And she made me a potion in a golden cup, that I might drink, and she also put a charm therein, in the evil counsel of her heart.

Now when she had given it and I had drunk it off and was not bewitched, she smote me with her wand and spake and hailed me, “Go thy way now to the stye; couch thee there with the rest of thy company.”

So spake she, but I drew my sharp sword from my thigh and sprang upon Circe, as one eager to slay her. But with a great cry she slipped under, and clasped my knees, and bewailing herself spake to me winged words:

“Who art thou of the sons of men, and whence? Where is thy city? Where are they that begat thee? I marvel to see how thou hast drunk of this charm, and wast nowise subdued...”

Circe transformed men into swine; but is this perchance possible? What does lycanthropy say about this? What do the Holy Gods say of this?

We have already spoken a great deal about the three states of the eternal Mother Space. Do opposite aspects of Devamatri exist? What does occult science say about this?

Any given body that penetrates into the fourth dimension can change its shape; however, something else is needed. What could this be?

Let us go into the roots, into the very facts. It is urgent to comprehend in depth that the third aspect of the Cosmic Mother, whether named Hecate or Proserpine, always has the possibility of unfolding herself into two more aspects of an opposite or fatal type.

Let us define and clarify: these two negative aspects of Prakriti constitute that which is named Kali or Holy Mary. [Editor: The author is not referring to Mary the mother of Jesus. See The Perfect Matrimony for more information.] 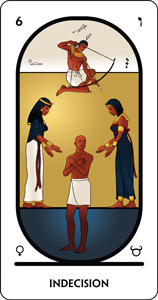 The Sixth Arcanum of the Tarot represents these two polarities of the great Mother Space. Let us remember Virtue and Vice, the Virgin and the Whore, Heva the White Moon and Lilith the Black Moon.

Let us remember the two gracious wives of Shiva (the Third Logos), Parvati and Uma. Their antithesis are those two sanguinary and ferocious women, Durga and Kali, the latter being the tenebrous regent of this horrible age of Kali Yuga.

Kali is the tempting serpent of Eden. She is the abominable Kundabuffer organ, about which we have written a great deal in our former Christmas messages. The sinister power of such a fatal organ transforms men into swine.

That the abominable harpies convert themselves into frightful fowls, or that Apuleius transforms himself into a donkey, and the comrades of Ulysses into swine is certainly not impossible. These are very natural phenomena of the fourth dimension, fourth vertical, or fourth coordinate, and these phenomena are always performed with the tenebrous power of Kali or Circe.

Our affirmations might appear very strange to readers who have never studied our former Christmas messages; however, in synthesis, we have to tell them that truly this Circe or Kali is the blind Fohatic force, the transcendental sexual electricity used in a malignant way.

If a harpy introduces herself with her physical organism into the fourth vertical, and if afterwards she transforms herself into a bird of evil omen, or into any given beast, you can be completely sure that she has based the whole of her work on the sinister power of the abominable Kundabuffer organ.

Have you ever heard about the tail of Satan...? It is actually the sexual fire projected downwards from the coccyx, towards the atomic infernos of the human being.

That Luciferic tail is controlled by a malignant atom from the Secret Enemy. Occult anatomy teaches that such an atomic demon is found located in the magnetic center of the coccyx.

It is in this abominable Kundabuffer organ (Satanic tail) where the whole leftist and sinister power of Kali, Circe, or Holy Mary is found contained.

The adepts of Black Tantra, such as the Bons and Drukpas of the red cap, develop in themselves the blind Fohatic force of this cited fatal organ.

Lycanthropy, the science of metamorphosis (commented on by Ovid), has always existed. As incredible as it may seem, there still exist modern Circes in some corners of the world in this present twentieth century.

As for scoundrels, pseudo-learned ones, those who believe they are filled with virtues, what does it matter to science or to us if they laugh?

There is an abundance of lycanthropy [shapeshifting] and modern Circes in the isthmus of Tehuantepec, Mexico.

We know the concrete case of a certain specimen who was a drunkard Don Juan, a certain remarkable gentleman who had the bad taste of having sexual relations with an ultra-modern Circe of the new age.

It is clear by all means that such a Don Juan placed the whole starry heaven at this harpy’s feet, painting rainbows in the sky for her, and making formidable promises to her.

“If you do not accomplish your pledged word, I will convert you into a donkey.” That was the cunning comment of the beautiful she-devil. Her lover laughed at what seemed to be a simple joke.

Days passed and even weeks without this suburban Don Juan remotely thinking of accomplishing his romantic promises.

But something unusual happened. On a given night, he did not return to his apartment. His roommate thought that perhaps Don Juan was fooling around somewhere, having found some new adventure.

However, his absence was prolonged far too long... many nights passed and nothing. Finally, while preoccupied, he suddenly saw that instead of Don Juan, a donkey appeared that insisted to enter the apartment.

So, the good friend went to the streets in search of Don Juan; he interrogated the beautiful Circe, he inquired and finally she told him... “Your friend is wandering around; behold him!” and she pointed to the donkey.

The guffaw, the malicious sarcasm... the thundering laughter of one of her friends (another very beautiful she-devil) was something definitive. This man comprehended everything.

Later on, some good people advised him to leave that place before it would become too late for him as well.

So, the best thing this poor man did was to return to the capital city of Mexico.