Now let us talk about the Templar Knights; let us converse a little bit about these loyal custodians of the Holy Grail.  May the Gods listen to us; may the Muses inspire us.

What could we say about the Castle of Monsalvat?  Let us all sing the hymn of the Grail.

Hymn of the Grail

O feast of love undying, from day to day renewed, draw near, as for the last time, to taste this sacred food. Who revels in good deeds this holy feast still feeds: he dares approach the shrine to share this gift divine.

For sins of the world with a thousand sorrows His sacred blood He offered; to the world’s Redeemer with joyful heart, oh, how gladly my blood I proffer: He died, for sin atoning thus, He lives, by death He lives in us!

In faith and love, behold the dove, the Savior’s shining token: take ye the wine, His blood divine, and bread of life here broken!

Ye men and Gods! Lo and behold the Grail Knights and their Squires. All of them are dressed with white tunics and white cloaks, similar to the Templar Knights... but, instead of the Red Tau, the symbol of a white dove in soaring flight is rightfully displayed on their weapons and embroidered on their cloaks.

This is an extraordinary symbol of the Third Logos, a living sign of the Holy Spirit, of Vulcan, that marvelous sexual force with which we can perform many prodigies and marvels.

Well... it would be helpful to penetrate within the deep meaning of Wagner’s drama.

In this drama, Amfortas is a specific type of remorse, Titurel is the voice of the past, Klingsor is the black magician, Parsifal is redemption, Kundry is seduction, and Gurnemanz is tradition.

In the beginning, the marvelous trombones sound their solemn reveille and Gurnemanz sinks to his knees with his two Squires, joining them in silent morning prayer.

Two strong knights come from the Grail’s castle with the evident purpose of exploring the path that Amfortas, the King of the sacred Chalice, is going to follow.

The old successor of King Titurel comes earlier than he ever has, to bathe himself within the sacred waters of the lake. This is done with the desire of calming the strong pains that have afflicted him since the moment of his own disgrace, when he received a frightful thrust of a lance, a spear with which Klingsor, the perverse black magician, wounded him.

A sorrowful story is the one of Klingsor!  Horrifying!  He was a sincere, mistaken one, as many are in this day and age.

He was living as a penitent in a frightful desert.  He wanted to be a saint, thus he became an enemy to all that could have sexual savor.  He dreadfully fought against the animal passions; he wore bloody sackcloths upon his flagellated body, and he cried a lot.

Nevertheless, everything was useless, since his lust, lasciviousness, and his secret impudence, in spite of all his efforts and sacrifices, were swallowing him alive.

Therefore (oh dear God!), being impotent in eliminating his sexual passions, this unhappy man resolved to mutilate, to castrate himself with his own hands.

Then after, he beseechingly extended his hands towards the Grail, but he was rejected with indignation by the Guardian.

This disgraced one believed that by hating the Holy Spirit, by rejecting the Third Logos, by destroying the sexual organs, he could be admitted into the Castle of Monsalvat.

The unhappy one thought that he could be admitted into the Order of the Holy Grail without the Maithuna, without previously achieving the Second Birth, and while being dressed with lunar rags.

This poor, unfortunate, and ill-starred knight supposed that one could enter to work with the Second Logos (the Christ), without previously having worked with the Third Logos (the Holy Spirit, the sexual fire).

To that end, the tenebrous, despairing Klingsor unjustly resolved to avenge himself against the noble Knights of the Holy Grail.

Therefore, he transformed his penitent desert into a bewitched and fatal garden of voluptuous delights, and he filled it with exquisite and diabolical women, dangerously beautiful.

Thus, there, in that delectable mansion, accompanied by his beauties, he lurked in secrecy for the Grail Knights in order to drag them into concupiscence, which inevitably conducts people towards the infernal worlds.

Whosoever allowed himself to be seduced by these provocative she-devils became his victim.  Thus, this is how he succeeded in carrying many Knights into perdition.

Amfortas, King of the Grail, combated this fatal, evil, venturesome Klingsor. The King wanted to put an end to this fatal, enchanted plague, but he too fell, surrendering to passion within the impudent arms of the lustful Kundry.

With such a formidable moment for Klingsor, he would have been foolish if he had lost such an opportunity.  Therefore, he audaciously snatched the sacred spear from the hands of Amfortas, then, while smiling, he triumphantly withdrew.

Thus, this is the way in which Amfortas, the King of the Grail, lost the blessed spear with which Longinus pierced the side of the Lord upon Golgotha.

Amfortas, who is also pierced in his side with the frightful wound of remorse, suffers the unspeakable.

Kundry, a delectable woman of extraordinary beauty, also suffers with remorse, but she humbly serves the brethren of the Holy Grail.

Deep down, you, Kundry, fatal woman, are nothing but an instrument of perfidy, under the service of that magician from darkness. You want to march on the path of light, but, hypnotized, you fail.

Amfortas, while submerged within intimate, profound meditation, listens in ecstasy to the mysterious words of mystic meaning that come from the Grail:

Made wise through pity, the blameless fool, (the innocent and chaste one), wait for him, the one I choose.

Suddenly, something extraordinary happens, something unusual; a great commotion stirs among the people of the Grail.  Precisely at the shore of the lake they have intercepted an ignorant boy, who, errant on those shores, has just wounded to death a swan, a sacred bird of immaculate whiteness.

But, why so much scandal?  To Parsifal, this was an event that had just occurred in the past, which fortunately was washed clean within the precious waters of Lethe.

It is clear that Parsifal, after suffering greatly, has reached total innocence.  He is the son of Herzeleide, a poor woman from the forest.  Really, he ignores mundane things, because he is protected with his innocence.

Klingsor’s flower maidens are useless, as these unjoyful ones cannot seduce such an innocent one.  Therefore, they flee defeated.

Useless become the seductive efforts of Herodias, Gundryggia, Kundry, as all of her arts fail.  Thus, when looking at herself defeated, she cries, asking help of Klingsor, who in desperation and rage, hurls the sacred spear against Parsifal.

Nevertheless, Parsifal is protected by his innocence.  Therefore, the spear - instead of piercing his body - remains hanging over Parsifal’s head for an instant. Then, the boy grasps the spear with his right hand, and swings this sharp weapon in the blessing sign of the cross.  Finally, the Castle of Klingsor collapses and sinks within the abyss, converted into cosmic dust.

The best comes afterwards, as Parsifal, accompanied by his Guru Gurnemanz, enters into the Temple of Montserrat, Spain, Cataluña.

The doors of the Temple are opened, and in solemn procession, all the Knights of the Holy Grail penetrate inside the holy place.  They - orderly and with infinite veneration - place themselves before two long, cloth covered tables that are parallel to each other and which leave an empty space between them. 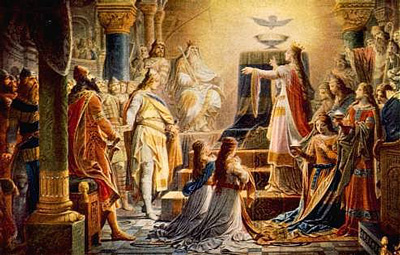 Delectable are those moments in which the mystical supper is celebrated, the cosmic banquet of the Pascal Lamb.

Extraordinary are those instants in which the bread and the wine of the Transubstantiation are eaten and drunk.

The blessed chalice in which Joseph of Arimathea collected the blood that poured from the wounds of the Lord upon the Golgotha of all bitterness, gloriously shines during the ritual.

Ineffable moments of pleroma are those in which Parsifal miraculously heals the wound of Amfortas by applying on his side the same blessed spear that wounded him before.

This spear is a formidable symbol; it is one hundred percent phallic; it is sexual in its integral form.

Amfortas fell because of sex, he dreadfully suffered with the pain of remorse, but thanks to the Sexual Mysteries, he totally regenerated and healed himself.

If any man will come after me, let him deny himself, and take up his cross, and follow me.  - Matthew 16:24

The Knights of the Holy Grail did deny themselves; they dissolved the pluralized “I” by incinerating the satanic seeds, by bathing themselves within the waters of Lethe and Eunoe.

The Knights of the Holy Grail worked in the flaming forge of Vulcan; they never ignored that the Cross is the result of the insertion of the vertical beam inside the formal cteis.

The Knights of the Holy Grail have sacrificed themselves for the sake of humanity; they have worked with infinite love in the Great Work of the Father.