Description of the Religious Ball Court 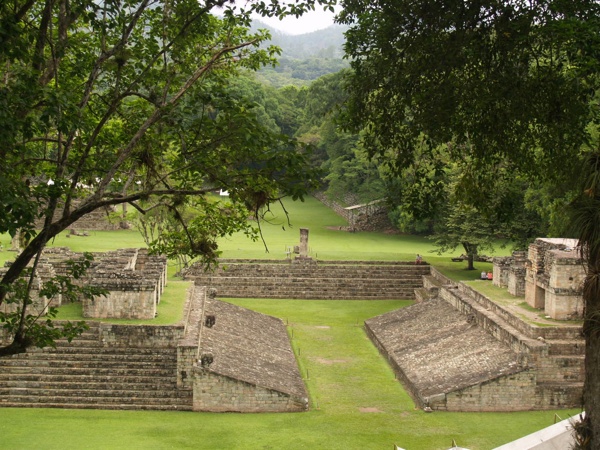 Commonly, this precinct is called the "ball field," yet this is a mistaken name.

Let us recall history: in London, in the nineteenth century, a jobless tramp had the idea of inflating a piece of rubber. Thereafter, he thought to cover it with a piece of leather, and wonder what could be the great finale of his idea. Thus, the outcome was a football. Subsequently, he started to kick his swollen leather ball. He seemed to experience good pleasure by doing it, and in a few days many youngsters in London were doing the same thing. In the beginning, people were protesting, because they were breaking glass and trampling people. The newspapers were also protesting, yet they continued playing their "swollen baloney." Now, they want to see this London's vagabondage even within sacred matters.

Among the Mayans there was a liturgical ritual performed with a stone-ball. Each movement was carefully studied. The ritual represented the struggle between light and darkness, between the powers of light and the powers of darkness. These rituals were also practiced in the gothic temples, the cathedrals of the Middle Ages. This is a very carefully studied religious ceremony.

Modern people, who do not see anything but the swollen leather ball of the vagabond of London, want to see their "swollen baloney" in sacred matters. However, our simple logic invites us to reflect: How did they play football with a stone ball? How many broken knees? How many dead people? One single whack on the head by the ball, and death. One single whack on the knee and an obvious fracture, or crippled for the rest of their life. Hence, their assumption seems absurd.

So, this liturgical ritual existed, also in the gothic cathedrals of the Middle Ages. See for yourselves: the court has a tao cross shape, and there are temples around.