Description of the Figure Representing the Four Forces 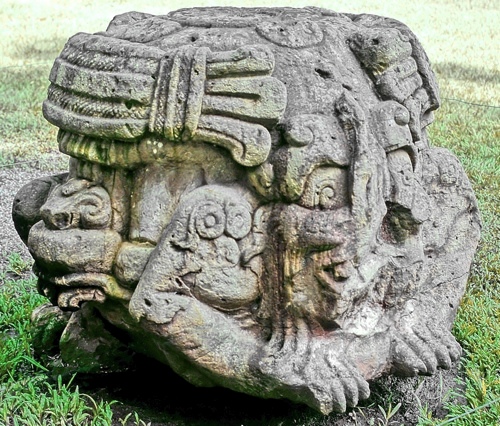 We can appreciate four lines around this stone, with a resemblance of the sun.

These same lines can be appreciated on UFOs.

These lines and the vertical line indicate the Holy Tetragrammaton [יהוה].

Further down we appreciate two arms and hands very well chiseled, which indicate the inferior man, the animal man, who must comprehend that the final synthesis proceeds from the four basic forces of creation.

After taking first into account the Adi-Buddha, these forces are:

The trinity within the unity of life has been always represented by the four lines. The Kabbalists called this Tetragrammaton. The name of the Eternal One has four letters: יהוה Iod, Hei, Vav, Hei.

The profound study of the Eternal One inevitably takes us to the ninth sphere (sex). We must lift up the serpent through the medullar canal and place it in the sanctuary of the heart.

The four points of the cross symbolize: water and earth, fire and air; spirit and matter, movement and repose. The four elements of alchemy are Salt, Sulfur, Mercury, and Azoth.

In the solitude of the mysterious sanctuaries, the neophytes were submitted to the four ordeals earth, water, fire, and air, which defined their diverse purifications. Then, they were taken out of their physical bodies, and with their Astral bodies, they were guided into the profundity of the sanctuaries. There, the grandiose mysteries of life and death were explained.

Before a lit candle, charcoals, or a bonfire, vocalize the mantra INRI, as follows:

Then, after vocalizing for a while the letter SSSSSSSSSS, you will be assisted by me, your servant.