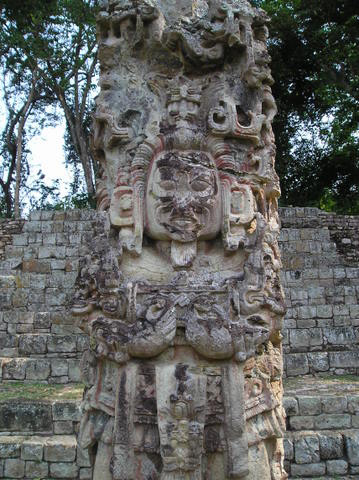 Its face appears with a mask.

The ears are chiseled in that way to indicate that we must learn how to listen to the teachings, the Word, to know how to pay attention to what it is saying to us.

The attitude of its hands is very well known among high initiates. The attitude in which they appear on this stela—hands over the chest, fingers touching each other—applies very much to meditation.

On the center of its chest there is a magnetic point, known in the Hebraic Kabbalah by the name of Tiphereth, the region of the soul . This is enough reason to comprehend why these deities have their hands over their chest in the clear attitude of meditation.

The scepter is a kind of a formidable rough, heavy bar with two lateral wings, which gives us the idea of the Caduceus of Mercury of the wise—in other words, the positive and negative forces. The bar itself represents the third force, the creative energy, which is the force that can carry us to the realization of the intimate Self, the Being; it is the force employed for the Great Work.

The scepter also gives the idea of the double-edged ax. In these moments, the case comes into my memory of what is often spoken in esotericism about the "hermaphrodite lumberjacks." This is an order of perfect androgynes or Helios. They are called "lumberjacks" because with their axes they chop trees that personify, typify, or—better said—symbolize our errors from the past. Let us clarify here that when we talk about hermaphrodites, we are talking about perfect, androgynous beings and not about those degenerated homosexuals of this day and age.

We find on this stone a very vivid illustration of the work that we must perform in ourselves in relation with the disintegration of the ego.

We see here with completely dazzling clarity the Hebraic doctrine of Judas Iscariot: the disintegration of the ego.

Judas Iscariot is not as many think, a man who betrayed his Master. No! Judas Iscariot performed a script taught by his Master, and that is all! Jesus of Nazareth himself prepared him, and Judas learned this script by memory, thus, consciously, he played his role in public.

The doctrine of Judas signifies the elimination of all our psychological aggregates: death to the ego.

This is why Judas "hung himself," in order to indicate that the ego must be reduced to ashes.

Judas followed a script, and nothing else. He prepared himself conscientiously in order to not contradict at all the sacred scriptures. Just as any actor performs his role, Judas rehearsed it many times before performing it in public, and nothing more.

Judas is and continues to be the most exalted disciple of Jesus of Nazareth. Judas achieved Christification.

Some animal figures can be seen on this stela; these are a vibrant representation of our psychological errors.

There is an urgent necessity of working on the death of the ego in order to liberate the Essence, the consciousness, the Buddhata.

The miter is very damaged, but still shows the idea of the three forces: holy affirmation, holy negation, and holy conciliation.