Lesson Eight: Alcohol, Intoxication, and Meditation on the Inner Self 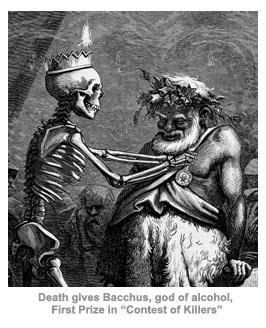 Some people begin this horrible vice during adolescence, others during their youth, others at maturity, and a few during old age. There are many causes that lead people to the vice of alcoholism. The adolescent that is initiated into this horrible path does it because he wants to feel like a complete man. He has a false concept of manhood. He believes that being a man means to be a drunkard, smoker, fornicator, adulterer, etc. The youngster reaches the crude vice of alcoholism, seduced by his friends or embittered by sufferings. Many times an amorous deception or a difficult economic situation tends to be the basic motive for initiating the fatal path of alcoholism. The mature man who joins this horrible path of alcohol does it, as usual, moved by the spring of his own bitterness; probably the death of a loved one, an amorous deception, a divorce, the loss of his job and his fortune, etc.

The human organism rebels against the first drinks. At the beginning the organism is not yet intoxicated and it is obvious that it strongly rejects the harmful ingredient of alcohol to which it is not accustomed.

Vomiting, an upset stomach after the huge drinking sprees, etc., are ways that the organism uses to eliminate the noxious ingredient. The fight of the organism is usually very violent but our malignant will proposes to violate it, and achieves it.

There is not a drunkard without his moral tragedy. The already intoxicated drunkard secretly guards his tragedy. The drunkard who is initiating himself in the vice always exteriorizes his tragedy, but when he comprehends that people do not understand him, he prefers to be silent.

Alcoholic intoxication comes once the defenses of the human organism have been overcome. On arriving at this second phase, the organism no longer feels well without alcohol. The intoxicated doctor can no longer carry out a surgical operation without his favorite drink; his pulse shakes, and if he carries out the operation, the results are very bad. The businessman can no longer do business without alcohol; he feels timid, nervous and fails. The worker is already incapable of working without his drink, he feels weak. Alcohol becomes a necessity for the intoxicated organism. The intoxicated one drinks and drinks, stimulated by the secret spring of his moral tragedy.

Some drunkards eat and drink; these last longer. Others do not eat so, as they say, “to not lose the intoxication”; these die very soon. Food favors the entire digestive system, but the lack of food definitely leaves the organism totally defenseless: the result is quick death.

The death of a drunkard is very horrible. They become very nervous in clinics and hospitals due to the lack of alcohol. They exclaim, shout, demand the bottle of alcohol; their desperation is frightening. Some die vomiting blood, others with terrible bloody diarrheas, etc.

Psychology of the Drunkard

The totally intoxicated drunkard spends everything on the vice. When the drunkard does not have anymore to spend, then he becomes a beggar, thief, swindler, or in the better of cases, nothing more than a simple slave of alcohol, a beggar of alcohol. The intoxicated one loses all concept of honor, dignity, responsibility, etc., and only one thing interests him in life: drinking. Alcohol becomes a vital fundamental necessity for the intoxicated person; that is all.

The serious things of life do not have any value for the drunkard; he is completely irresponsible. The intoxicated alcoholic is immoral in the most complete sense of the word. Dignity, word of honor, virtue, etc. have absolutely no importance for the intoxicated alcoholic. The hardhearted drunkard laughs at all those human qualities and even feels infinitely superior to his fellowmen.

The true effective campaign against alcohol is achieved by explaining with every detail the three defined aspects of this horrible vice, these three aspects of the path of alcohol: Initiation, Intoxication and Death. They should be pointed out at home, in school, at the university, in academies, temples, lodges, ashrams, sanctuaries, etc. This is the best way to effectively campaign against alcohol. Dry laws prohibiting the sale of alcohol are useless because drunkards then astutely invent their methods of making intoxicating drinks in a clandestine form. This does more harm than good to society. Only creative comprehension can save people from falling into this horrible and frightening vice. The audio-visual system of teaching is marvelous to combat the vice of alcohol.

Parents who drink set a bad example to their children, and lead their children down the fatal path of the Abyss. Children should be taught at home what this horrible vice is, the three aspects of this horrible path, etc. This type of teaching, accompanied by a good example, is radical in warning the new generation against the vice of alcohol.

Whatever is learned well at home is never forgotten.

The Rosicrucian Gnostic should drink the wine of meditation in the sacred chalice of concentration. It is necessary to keep far away from the negative aspect. It is necessary to not fall into the negative aspect of the mind. The drunkard submerges himself into the atomic hells of nature and becomes lost in the Abyss. It is better to drink the wine of meditation in the sacred chalice of thought concentration. Let us concentrate our mind on our Inner God. Let us meditate on him for entire hours. In this manner we will reach Samadhi, the ineffable ecstasy. Then we will be able to converse with the Gods and penetrate the Great Mysteries of Nature. This is better than the “delirium tremens,” which allows the drunkard to penetrate the atomic hells of Nature and be with the demons of the Abyss. The visions of the “delirium tremens” of drunkards are actually real; that which they see in their visions really exists. They see larvae, demons, and horrible monsters that really exist in the Atomic Infernos of Universal Nature. They penetrate the abyss and see the beings of the Abyss, perverse beings that live in the Atomic Infernos of Nature.

Every human being carries around with him an atomic atmosphere perceptible to clairvoyants. These larvae live in the fourth dimension. By the way, we must say that modern physics already begins to admit the four coordinates, the fourth dimension, the fourth vertical. The drunkard carries in this ultra-sensitive atmosphere alcoholic larvae that stimulate him in the vice that gave them life, inciting him to drink. Said larvae only disintegrate with the fumes of sulfur.

Perfumes [incense] combined with mental power constitute a marvelous healing system. Drunkards can be healed by wisely combining these two elements. [Read The Faculties of Medicine]

Do you have any loved one who is a victim of the vice of alcoholism? When he is asleep, hold his hand with your right hand. Make him smell a delicious perfume, a rose extract, and then talk to him with a soft voice as if he was awake. Advise him, explain to him in a detailed way what the horrible vice of alcoholism is. Remember that when the body sleeps, the ego leaves the body and travels in the fourth dimension.

The words you utter to the sleeping person reach the ear drum, go on to the brain’s sensory center and are then transmitted to the ego even when the latter is far away from the physical body. On awakening, the ego returns to the physical body and if he does not remember what you told him, you can be certain that all you have said has remained in your loved one’s subconsciousness. These words produce their effect little by little and the day finally arrives when the patient is cured of the horrible vice of alcoholism.

Lie down and remain calmly in bed. Open your arms and legs to the right and left to form the flaming five-pointed star. Relax your muscles properly. The process of relaxation is easy if combined with imagination. (Practice the exercise of relaxation in Lesson Two.)

Once the relaxation of the physical body has been obtained, it is necessary to relax the mind. Mental relaxation is also obtained with the help of the imagination. Observe all the thoughts that come to mind, all the memories that assail you, all the worries, etc. Study them to find out their origin. The study of all this will reveal many things to you: it will make you get to know your defects, your errors, etc. In this manner, you will know how your “I,” your ego, works.

In this manner, your mind will become silent and still. In the silence and calm of the mind you will be able to see and hear the Inner Self. He is the Internal Master. He is your Internal God.

When the mind has achieved absolute calm and silence, it can concentrate on the Inner Self. This concentration is done with the help of prayer. Pray to your Inner Self. Try to converse with your Inner Self. Remember that praying is conversing with God. You can pray without formulae; in other words, talk to God: tell Him what your heart feels with infinite love.

Whoever achieves perfect concentration can meditate on his Internal God. Reflect on your Internal God, identify yourself with him, and live in him.

Whoever learns to calm the mind, to concentrate the mind and pray, can practice perfect meditation and reach the heights of internal contemplation. On reaching these heights we are in ecstasy. We can talk face to face with the ineffable Gods, study the marvels of the infinite cosmos and travel through the infinite in Spirit and Soul. In that state of ecstasy the physical body remains asleep and abandoned. Now you will comprehend why it is convenient to practice these exercises during instances of drowsiness. Sleep is a faculty that should be taken advantage of to consciously achieve ecstasy.

May peace be with you!

By purchasing a print edition of "Introduction to Gnosis", you get a high quality, permanent source of profound knowledge, you help us print more books, keep this website online, and allow us to give free books to prisoners, churches, libraries, and more.
Pick a Bookseller
Share This Page: