140. When we penetrate into the elemental department of the balsamum trees from which myrrh is extracted, we see these elemental children happy in Eden, dressed with incarnadine tunics and capes.

141. Myrrh belongs to spiritual gold and is associated with frankincense and with the gold of the spirit, like the ineffable pleroma of Nirvana.

144. There is a need to lose everything in order to gain everything.

145. There is a need to be dead to the world in order to be alive for God.

146. This is the elemental magic of the myrrh.

147. The monadic essence of this elemental department of nature is intimately related with the world of the Innermost.

148. The spiritual gold is within the immense crucible of Nirvana.

149. The particular monads who constitute the monadic essence of each elemental department of nature are endowed with vehicles of a distinct density. Yet, even when they are particularized, we cannot say they are individualized, because they do not have an individual mind.

150. However, they are endowed with cosmic intelligence, innocence, power, and happiness.

151. The devas or angels are in charge of organizing the monadic essences, who are dressed with vehicles during this mahamanvantara. These devas are their protectors and instructors. They perform their work as groups of spirits and are in charge of impelling the cosmic evolution of these monadic essences, who are known as elementals of nature and who are dressed with cosmic vehicles.

152. The monadic essences begin to show their own individuality when they pass through the evolution of the vegetable kingdom of nature.

154. The monadic essences must evolve in the mineral, plant, and animal kingdoms before their individualization.

155. We cannot say that the monad of Descartes was incarnated in a tree, because the human monad is an individualized monad, different from the vegetable monad.

156. However, it is correct to affirm that the monad of Descartes was an animal monad, vegetable monad, and mineral monad before his individualization.

157. We understand that the monad is the Innermost of every mineral, vegetable, or animal elemental. The Innermost of the human being is composed of Atman-Buddhi-Manas.

158. The monads of the elementals of nature are totally impersonal beings.

159. The elementals of the myrrh are children of an enchanting beauty who possess the happiness of Nirvana.

160. Our disciples will now understand why gold, frankincense, and myrrh were offered to the God-Child of Bethlehem.

162. The monadic essences of this great life emerge and reemerge incessantly with the great rhythms of the universal fire.

163. All these monadic essences reside in the profundity of the cosmic consciousness. We must learn how to handle them in order to work in this great laboratory of nature.

164. All the superlative spheres of the cosmic consciousness are classified by the Vedas in the following order:

165. Atala is the first plane, directly emanating from the Absolute. The hierarchies of the Dhyani Buddhas belong to this plane. They are in the state of parasamadhi or dharmakaya, a state in which there can be no progress, because they are completely perfect entities who only await the cosmic night in order to enter into the Absolute.

166. The second plane of the Vedas is Vitala. As it has been said, the celestial buddhas that have emanated from the seven Dhyani Buddhas are in this loka.

167. The third loka, or plane of consciousness, is Sutala. It is the plane of sound. Buddha Gautama reached that plane in this world. This is the plane of the hierarchies of the kumaras and agnishvattas.

168. The fourth loka of the Vedas is Talatala, the fifth is Rasatala, the sixth is Mahatala, and the seventh is Patala. 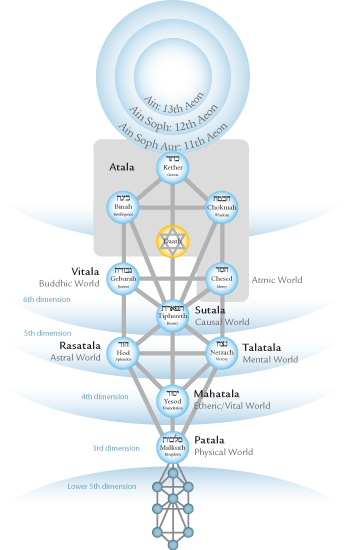 171. The monadic essences glow like virginal sparks in Atala. The sacred fire of our Lord Jesus Christ is in Vitala.

174. This classification is according to the old scriptures of the Vedas.

175. All of our seven cosmic planes are populated with elemental creatures.

176. The elemental creatures descend from the region of Atala to the physical world in order to evolve through the mineral, vegetable, animal, and human kingdoms.

177. The light descends plane by plane until reaching the physical world. It then ascends again to the ineffable region of Nirvana.

179. Myrrh belongs to the region of Atala, from where life descends in order to return and ascend anew.

180. Myrrh is the magic of the great alaya of the world.

181. The seven tattvas of nature are populated by elemental creatures and these creatures are incarnated in the plants.

182. One who learns how to handle vegetal magic can then handle the tattvas (read my Treatise of Esoteric Medicine and Practical Magic).

183. The Akashic tattva is the paradise of those virginal sparks who come from the monadic substances of the world of the Innermost.

184. The Vayu tattva is the element of the creatures who move the air.

185. The Tejas tattva is the element of the salamanders of the fire.

186. The Apas tattva is where the creatures of the water live.

187. The Prithvi tattva is the element in which the gnomes of the earth live.

188. All these innocent creatures are incarnated in the plants. One who knows the magic of the plants can then handle the tattvas of the universe.

189. We can calm the tempests, unleash the hurricanes, unleash the storms, and cause it to rain fire, as the prophet Elijah did, with the elementals of plants.

190. Myrrh is related with the Akasha that lives and palpitates in all which is created.

By purchasing a print edition of "Igneous Rose", you get a high quality, permanent source of profound knowledge, you help us print more books, keep this website online, and allow us to give free books to prisoners, churches, libraries, and more.
Pick a Bookseller