The Three Aspects of the Earth's Interior

Question:Master, based on what you have previously explained to us, should we then understand that the infradimensions only exist below the interior layers of the Earth, since the supradimensions, which are associated with the heavens, are only found above the terrestrial crust?

Samael Aun Weor: Respectable gentleman, your question is combined quite significantly; thus, I will give a quick answer.

It is good for all of you to understand that this planetary organism on which we live has three clearly defined aspects in its interior:

Question: Even supposing that these three aspects of the interior of the Earth – which you have spoken about to us – exist – since, I clarify, in my case, I agree with it only hypothetically – we would have to arrive at the conclusion that the nine heavenly spheres co-exist with the hells that correspond to the infradimensions. Is it perhaps congruent that the heavens are to be found in the same location as the hells?

Samael Aun Weor: Respectable gentleman, it is urgent for you to comprehend in an integral manner that everything in nature and in the cosmos is reduced to additions and subtractions of dimensions that mutually penetrate and co-penetrate each other without disorder.

There exists an hermetic postulate that states, “That which is above is as that which is below.” Apply this postulate to this subject-matter under discussion.

However, allow me to explain this subject-matter in depth; what really happens is that these nine heavens have a gravitational atomic center that is exactly located in the center of the planet Earth. In other words, I want to tell all of you, ladies and gentlemen, that the nine heavens that gravitate around such a gravitational atomic center of the planet Earth are extended far beyond the whole solar system. This same process is repeated in each of the planets of the solar system of Ors.

Question: Venerable Master, your exposition strikes me as very lovely and fits perfectly within the hollows of my understanding; notwithstanding, I must admit that according to the precepts of formal logic, the explanation that you just gave cannot be clearly demonstrated. Therefore, in this case how can we verify your affirmation?

Samael Aun Weor: Respectable gentleman, your question is indeed intriguing. Unquestionably, formal logic leads us unto error; therefore, we cannot reach at the experience of the reality by means of such logic. We need a superior logic, which fortunately exists. Ouspensky has already written “Tertium Organum” or "the third canon of thought." It is clear that there exists the sense of unity in the mystical experience of many transcended individuals; such humans - by means of the development of certain cognitive faculties - have been able to directly verify for themselves the reality of the infernal worlds in the interior of the planet on which we live.What is most intriguing about all of this is that the data enunciated by one and many other adepts are similar despite the fact that such individuals dwell in distinct parts of the Earth.

Question: Then Master, are you telling us that only certain reduced number of adepts who have had the fortune of being endowed with those cognitive powers, are the ones who have been able to verify the infradimensions and the supradimensions of the planets and the cosmos, as well as within the human being?

Samael Aun Weor: In the field of direct experimentation, in the field of practical metaphysics, a great diversity of individuals exist with psychic faculties more or less developed. Obviously, there are disciples and there are masters; disciples can give us more or less incipient information; yet, the adepts or masters have immensely superior faculties at their disposal, which make them more capable of in-depth investigations, therefore, such faculties allows them to speak in a more clear, precise, and detailed manner.

Samael Aun Weor: Dear friend, it is obvious that the direct experimentation in the field of metaphysics is only accessible to individuals who have developed the latent faculties in the human being. Nevertheless, I want to tell you with complete clarity that every person can briefly experience the crude reality of such atomic infernos when experiencing those disgusting nightmares. Indubitably, I did not mean to state that the complete verification of the crude reality of the infradimensions of nature is permissible through the aforementioned nightmares. Whosoever wants to truly experience that which is below the tridimensional world of Euclid must develop certain very special psychic faculties and powers.

Question: Is it possible for all of us to develop those faculties?

Samael Aun Weor: Respectable gentleman, allow me to inform you that the International Gnostic Movement possesses methods and systems by which every human being can develop their psychic powers in a cognizant and positive manner.

Question: Master, what can you tell us so that we may understand about that demon who dwells in a hell full of flames imbibed in a tremendous odor of sulfur, and where the souls who behaved badly while they were alive are punished? 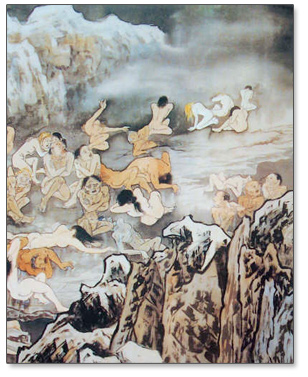 Samael Aun Weor: Gentleman, I will answer your questions in order. Unquestionably, within the submerged regions of the mineral kingdom beneath the very epidermis of the planet Earth different zones exist. Let us briefly remember the igneous zone; it is clear that volcanic eruptions have demonstrated its existence. Let us now mention the aqueous zone; no one can deny that water exists within the interior of this planetary organism. Now for a moment, let us think of the aerial element, even if this seems incredible, air currents, special aerial zones, also exist within our planet Earth. Moreover, it has been said with completely dazzling clarity that a certain vast aerial region, better said, a totally hollow region, exists within the interior of this world. And not in the slightest can we deny the reality of stones, sand, rocks, metals, etc.

Now when thinking about the concept of that demon or demons, let us also reflect upon lost souls ; since this is indeed intriguing. Many inhabitants of the infernal worlds inhabit the region of fire, yet others live in the aerial regions, and finally others inhabit the aquatic regions and the mineral zones. Therefore, it is obvious that the inhabitants of the terrestrial interior are quite related with sulfur, since sulfur is an integral part of volcanoes; nonetheless, specifically, it is evident that only those who inhabit the fire can be associated with sulfur. Consequently, I want you respectable gentleman, honorable public, ladies, and gentlemen, to comprehend the inferno or “infernus” in a crudely natural manner, without any type of artifices.

Question: Master, can you tell me how is it that - since the region of the lower abdomen is associated with the infernal worlds - the silver cord is located in that infernal area? Does this mean that such a cord is constantly connecting us with our infernal worlds?

Samael Aun Weor: Respectable sir, I will give you a precise clear answer. Much has been said about the silver cord; it is indubitable that every soul is connected to the physical body by means of this magnetic thread. However, we have been told that a section of this cord or thread of life is found related to the heart and another to the brain. Diverse authors emphasize the idea that seven sections are derived from the silver cord and that these are found connected with seven specific centers of the human organism. In any case, this thread of life, this cord which you mentioned to us that is the very basis of your question, is in no way connected to the seven chakras of the lower abdomen. It is interesting to know that during the hours of sleep, the essence, the soul , escapes from within the physical body in order to travel to different places of the Earth or the cosmos; when this happens the magnetic thread of our existence is loosened and stretches infinitely; thereafter it pulls us towards our physical body so that we awaken in bed.

Question: Master, can you expand on what you have just said with respect to the seven chakras that are found in the lower abdomen, since we have been told in other lectures and even in your own books that the seven chakras are found located in different parts of our organism?

Samael Aun Weor: Honorable gentleman, I understand your question and I will answer it with great pleasure. I understand that you, sir, are mistaking the seven chakras of the lower abdomen with the Seven Churches of the Apocalypse of St. John, which are located on the dorsal spine. Indubitably, in no part of my explanations, which we have been developing here in Mexico City, have I mentioned that the [lower] magnetic centers or vortices of force are located on the staff of Brahma or spinal canal. We have only cited or mentioned the seven infernal doors, which the religion of Mohammed talks about, which are seven specific centers or chakras located in the lower abdomen and which are related with the infernal worlds. That is all; understood?

Question: Venerable Master, based on everything that has been previously explained, can we infer that the physical aspect of the center of the Earth belongs to the tridimensional world; however, the supradimensional or infradimensional aspects which are located in the same subterranean regions of the planet cannot be verifiable by means of the intellectual tridimensional, sensorial perceptions of the rational animal?

Obviously, the subterranean regions of our world are comprised by three fundamental aspects. Yet, again, our ordinary senses only perceive in a superficial manner what is physical, tridimensional. However, if we want to know the superior or inferior dimensions of the interior of the Earth, we must develop other faculties of perception, which are found latent in the human race.

Question: Beloved Master, should we understand that living beings inhabit both the supradimensions as well as the infradimensions?

Samael Aun Weor: My friends, unquestionably, the three zones of the interior of our world are inhabited. If the lost souls live within the infradimensions, then many Devas, elementals of a superior order, dwell in the supradimensions within the planetary interior, i.e. Gods, Masters, etc. who work intensely with the intelligent forces of this great nature. We could talk very extensively about the populations of the central zones or supradimensional or infradimensional zones of the interior of our world, however, these themes shall be addressed in future lectures. Good night.

By purchasing a print edition of "Hell, the Devil, and Karma", you get a high quality, permanent source of profound knowledge, you help us print more books, keep this website online, and allow us to give free books to prisoners, churches, libraries, and more.
Pick a Bookseller