Earthlings have directed themselves towards the conquest of outer space, and they do not care at all about flying saucers or spiritual matters.

If we compare the flying saucers with the space rockets, the rockets are grotesque and ridiculous. Nonetheless, the Russians and the “gringos” want to conquer the Moon, and it is clear that they will land on the Moon with them.

What is most lamentable of all this is the aggressive instinct of the current terrestrial humanity. Whoever dominates the Moon will want to turn it into an armed military platform with atomic potential.

They have not landed on the Moon [as of 1964], yet, like the Tyrians and Trojans [enemies in The Aeneid] they are already talking about orbital nuclear missiles in order to destroy defenseless cities. Yes, this is the regrettable state of the current terrestrial humanity.

The inventor of the hydrogen bomb still does not know the damage that he caused to humanity. If one of those hydrogen bombs exploded in the superior zones of the atmosphere where there is a deposit of pure hydrogen, then the entire atmosphere of the Earth could burn, fulfilling the prophecy uttered by the Apostle Peter in his second Epistle that states the following:

"But the day of the Lord will come as a thief in the night; in the which the heavens shall pass away with a great noise, and the elements shall melt with fervent heat, the earth also and the works that are therein shall be burned up." - 2 Peter 3:10 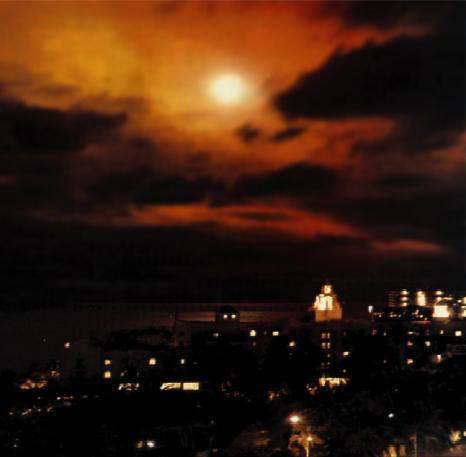 Photo of Starfish Prime, a hydrogen bomb exploded 250 miles above the Pacific Ocean by the United States in 1962. This was part of a series of tests conducted during the Cold War by the United States and the Soviet Union. Image from U.S. Congress “Report of the Commission to Assess the Threat to the United States from Electromagnetic Pulse (EMP) Attack, Volume 1: Executive Report, 2004”

It is clear that before this could happen, before any wacky Earthling could conceive the sick idea of making this detrimental experiment with the hydrogen bomb, before it could explode in the superior zones of the atmosphere amidst the pure terrestrial hydrogen, the deposit of living universal hydrogen, we can be sure that they, the navigators of infinite space, would make the planet Earth explode into pieces, so the humanities of other planets of the solar system will not have to undergo the consequences of the explosion of our terrestrial hydrogen. Yes, such a terrestrial catastrophe would frightfully affect the other planets of the solar system. Thus, before this could happen, they, the navigators of the sidereal space, would be forced with deep pain to destroy this planet, making it to fly into pieces, because it is not right that other planetary humanities should suffer the consequences of the madness of the Earthlings.

Space rockets will inevitably land on the Moon. Later on, these Earthlings perversely and arrogantly will launch themselves to Mars. 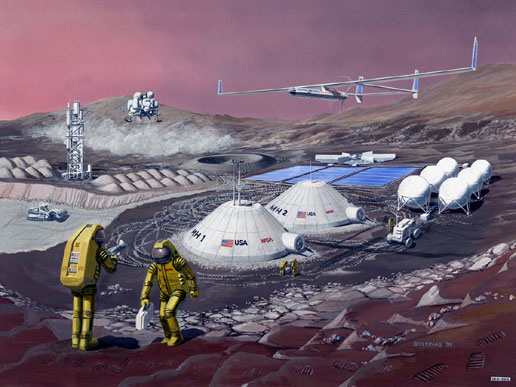 A promotional image of the intention to colonize Mars. Image credit: NASA

By logical deduction, the encounter with humanities of other planets is totally inevitable, thus this failed and degenerated root race has no alternative but to transform themselves or perish.

The Universal Christian Gnostic Movements want to forge groups of men and women of good will in order to welcome our brothers and sisters from space.

Millions of Earthlings—filled with pride, arrogance and perversity—believe only in their space rockets and their weapons of mass destruction. Those hordes of learned ignoramuses are surrendering themselves to all the vices the Earth, and they laugh at everything that smells of flying saucers.

We, the Gnostic people, do not in any way accept the Antichrist of false science, neither we can even slightly think that the infinite space can be conquered without having previously conquered ourselves.

It is completely absurd to suppose that the barbarian hordes of Earthlings can conquer other planets and enslave superior planetary humanities.

The Gnostic people do not accept the perversity of the intellectual-loafers, thus they have resolved to organize an army for world salvation with men and women of good will who are willing to joyfully welcome our brothers and sisters from sidereal space.

The Universal Gnostic Movements will be established everywhere, in different places of the Earth, true mystical cenacles conducive to the study of the cosmic laws, in order to prepare people so that they can welcome our brothers and sisters from space.

Yes, the Gnostic Movements comprehend the necessity of cosmic ships in order to travel throughout the infinite; nevertheless, we do not believe that the way of perversity, pride, and rockets is the correct way.

The infinite cosmos is sacred, and is governed by divine laws that cannot be broken with impunity without receiving the disastrous consequences. We, the Gnostics, are willing to study the laws of eternal space with all humility and at the feet of our brothers and sisters from space. We know that this is the precise way that can allow us to navigate in true cosmic ships through infinite space.

Now we need to be prepared, by finishing with all our defects, by dissolving the “I” that we carry within, that detrimental Mephistopheles.

In some places of the Earth, very secretly, there are select human groups in contact with the cosmic visitors, from whom they have received a small number of interplanetary ships. In the Himalayas, filled with snow and cold, there is a certain group of Lamas who are in contact with our brothers and sisters from space. That group very secretly possesses a certain number of flying saucers with which they travel through the infinite. In other places of the Earth there are similar groups that already possess flying saucers. We are affirming something that cannot even remotely be accepted by the know-it-all, ironic, sarcastic, and vain intellectual-loafers. However, what does it matter to science or to us?

On December 27, 1968, our Second Gnostic Congress will be celebrated in Barranquilla, Colombia, South America. This event will be international, thus all the delegations from all the Gnostic sanctuaries of America must attend. Among other things, this Gnostic Congress must deeply study methods and systems of conducive action to propagate these ideas everywhere, in order to prepare the environment for our brothers and sisters from space. It is necessary, it is urgent, to propagate these teachings and to form true homes for our brothers and sisters from space. We invite the brethren of all religions, schools, and sects to this great international, spiritual, ecumenical congress, without distinctions of creed, race, society, school, order, sexes, or color.

By purchasing a print edition of "Cosmic Ships", you get a high quality, permanent source of profound knowledge, you help us print more books, keep this website online, and allow us to give free books to prisoners, churches, libraries, and more.
Pick a Bookseller
Share This Page: