When King Nebuchadnezzar lay sleeping in his bed, he thought about what he would be in the future. Then he fell asleep. The king’s soul then left the flesh and bone body, traveled in the astral plane, and saw a statue whose head was of gold, its breast and arms were of silver, its legs were of iron, and its feet were partly iron and partly baked clay. 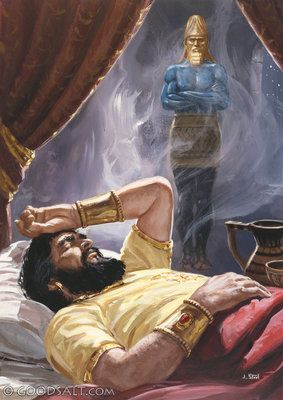 The king ordered all wise men, astrologers, and Chaldean soothsayers to be called forth so that they could prophesy the dream of the statue for him and give their statement. No one was capable of telling the king about his dream, for he did not want to tell it to anyone. On account of this the wise men went to their death [Daniel 2].

The prophet Daniel went to his house and prayed to the Lord Jehovah with his companions, and then went to bed and slept peacefully.

Daniel’s soul then left his body, and saw in the astral world King Nebuchadnezzar’s famous statue.

The next day Daniel went before the king and prophesied the dream of the statue for him, and gave him his statement, that is, the interpretation. The king was astounded, and honors were heaped upon Daniel.

The astral plane is known in the Bible by the name of “Mount.” On the Mount, Jesus transfigured himself before his disciples. The Mount is astral.

Our disciples, upon awakening from their material sleep, must not move, because with the body’s movement the astral body is stirred, and recollections are lost. Upon awakening, disciples must make an effort to remember all those places where they were while their bodies were sleeping. They must make an effort to remember all their past experiences on the astral plane. Our disciples must not recount their experiences to anyone.

By purchasing a print edition of "Mysteries of Life and Death", you get a high quality, permanent source of profound knowledge, you help us print more books, keep this website online, and allow us to give free books to prisoners, churches, libraries, and more.
Pick a Bookseller
Share This Page: