During the course of existence, different types of energies flow through the human organism.

The motor and muscular force manifests itself four and a half months after conception; this is related to the birth of the respiratory and pulmonary function. At ten and a half months growth occurs with all its marvellous metabolisms and conjunctive tissues. When the child is between two and three years old, the fontanel of the newly born closes and the cerebro-spinal system is completely formed.

The human personality is formed during the first seven years, and at fourteen years personal energy appears and, flowing domineeringly through the sympathetic nervous system, sex appears at thirty-five years in its transcendental form as creative emotion. It is upon reaching this age that we can make what is called Soul . The common man does not have a soul , or rather, he still is not a true man; he doesn’t even have a soul .

The intellectual animal falsely named “man” is a machine controlled by the legion of the ego. This is pluralized. “I must read a book,” says the intellectual function. “I am going to a football match,” says the motor function; “I am hungry, I shall not go anywhere,” states the digestion; “I prefer to find a woman,” says the ego of passion etc. etc. All these egos argue amongst themselves. The ego that today swears faithfulness to Gnosis is replaced by another that hates Gnosis. The ego that today adores a woman is later replaced by another that hates her. Only by making the Soul do we establish a permanent principle of consciousness within ourselves.

He who has Soul lives consciously after death. The Soul may be created with the accumulation of the finest energies the organism produces and the crystallization through supreme efforts, to make one Self-conscious in a total and definitive way. Unfortunately, the intellectual animal called man wastes these energies stupidly on cravings, anger, fears, hate, envy, passions, jealousy, etc.

It is urgent that we create conscious will; it is indispensable that we subject all our thoughts and acts to inner judgment. Only in this way can we know ourselves in depth in order to create the Soul .

The Ray of Death

The Ray of Death reduces so-called man to a simple molecular quintessence, in the same way that a ton of flowers may be reduced to a single drop of essential perfume. Because the energy of death is so strong, it destroys the human organism totally. It is a current of such high voltage that it inevitably destroys the organism when it travels through it. As a flash of lightning can tear a tree apart, so the ray of death reduces the human body to ashes. It is the only type of energy that the body cannot resist.

This ray connects death with conception. The two extremes meet. When the essence is detached from the old body on the terrible impact of the ray of death, a tremendous electrical tension is produced on a key note, the axiomatic result of which is the movement and combination of the determining genes of the future physical body. This is how the fine constituents of a fertilized egg are arranged in the corresponding order, having electrical tension and the key note of death for a basis.

Two things go to the grave. The first is the physical body, and the second is the human personality. As we have already said, the latter is formed during the first seven years of infancy and is strengthened with experiences. Sometimes the personality wanders through the cemetery, or leaves its grave when the mourners visit and bring flowers. But the personality soon disintegrates. The personality is energetic and atomic. The personality is perishable. There is no future for the personality of a dead person, it is mortal.

It is a mistake to divide ourselves between two egos, one a superior sort and the other inferior: The ego is a legion of devils, which normally develops within us; that is all.

A lot is said in occultist literature about a superior ego, about a divine ego, but in fact the so-called superior ego is not an ego. The Divine Being transcends an ego-ism. That which does not have a profane name is the Being, the Innermost.

The Tibetan “Book of the Dead” (the Bardo Thodol) says the following:

Oh! Noble by birth... your present body being a body of desire... is not a body of gross material, so now you have the power to pass through any mass of rocks, hills, boulders, earth, houses, and Mount Meru itself, without meeting any obstacle... you now possess the power of miraculous actions, which is not the fruit of any samadhi, but the power which comes to you naturally... You can instantaneously be in any place you want; you have the power to get there in the time it takes a man to open and shut his hand. Do not desire the various powers of illusion or of changing form, do not desire them.

The vital body has more reality than the physical body. We know very well that the physical body changes totally every seven years and not a single old atom remains in the body. But the vital body does not change. Contained in this body are all the atoms of childhood, adolescence, youth, maturity, old age, and decrepitude.

The physical body belongs to the world of three dimensions. The vital body is the body of the fourth dimension.

Eternity opens to devour the dead and then expels them from its bosom to return them to the world of time and physical form. The dead are expelled from eternity because they still do not have Being. Only those who have Being can live in eternity. The Being is the Innermost, the Spirit. It is necessary to work first with molecular material to make Soul , and then to refine the energy of this Soul to a higher grade to make Spirit. It is necessary to transmute molecular material into electronic material and cause the fission of the atom to liberate the sacred fire that converts us into divine Spirits. 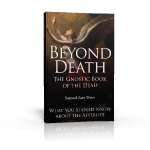 By purchasing a print edition of "Book of the Dead", you get a high quality, permanent source of profound knowledge, you help us print more books, keep this website online, and allow us to give free books to prisoners, churches, libraries, and more.
Pick a Bookseller
Share This Page: