Gurdjieff: The Beginning of the Orgasm 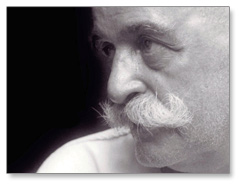 “Before continuing to relate how all this occurred, I must tell you in a little more detail about that sacred substance which is the final result of the evolving transformations of every kind of being-food and is formed in the presence of every being without distinction of 'brain system.' This sacred substance, elaborated in the presence of beings of every kind, is almost everywhere called 'exioëhary,' but your favorites on the planet Earth call it 'sperm.'

"Through the all-gracious foresight and command of our Common Father Creator and according to the actualization of Great Nature, this sacred substance arises in the presence of all beings, without distinction of brain system or exterior coating, in order that by its means they may consciously or automatically fulfill that part of their being-duty which consists in the continuation of their species. But in the presence of three-brained beings it also arises in order that they may consciously transform it for coating their higher being-bodies for their own being.

“Before the second transapalnian perturbation there, which the contemporary three-brained beings refer to as the 'loss of the continent of Atlantis,' in the period when various consequences of the properties of the organ kundabuffer had already begun to be crystallized in their presence, a being-impulse was gradually formed in them which later became predominant.

"This impulse is now called 'pleasure', and in order to satisfy it they were already beginning to exist in a manner unbecoming to three-centered beings, that is to say, most of them gradually began to remove this sacred being-substance from themselves [through orgasm] for the satisfaction of this impulse alone.

"Well, my boy, from then on most of the three-brained beings of the planet Earth were not content to carry out the process of the removal of this substance, which is continuously elaborated in them, only at those periods normally established by Great Nature for beings in accordance with their organization, for the purpose of the continuation of their species. Owing to this, and also to the fact that most of them had ceased to utilize this substance consciously for coating their higher being-bodies, it came about that when they did not remove it from themselves in ways that by then had become mechanical, they naturally experienced a sensation called 'sirklinimana,' a state they describe as 'feeling out of sorts,' and which is invariably accompanied by what is called 'mechanical suffering.'

"Remind me at some opportune moment about those periods fixed by Nature for the normal process of the utilization of the exioëhary by beings of different brain-systems for the continuation of their species, and I shall explain this to you in detail.

"Well then, they like ourselves are only 'keschapmartnian' beings, and when this sacred substance, continuously and inevitably formed in them, is utilized normally for the continuation of their species by means of the sacred process 'elmooarno,' its removal from their presences must be accomplished exclusively with the opposite sex. But these three-brained beings who by chance had escaped disaster were no longer in the habit of utilizing this substance for coating their higher being-bodies and, as they were already existing in a manner unbecoming to three-brained beings, when they were obliged to exist for several of their years without beings of the opposite sex, they turned to various antinatural means for the removal from themselves of this sacred substance, exioëhary.

"But for the three-brained beings of the 'passive sex' or, as they call them, 'women,' these antinatural means were not sufficiently satisfying, and so the poor 'women-orphans' of that time, already more cunning and inventive than the men, began to seek out beings of other forms and accustom them to be their 'partners.' Well then, it was after these 'partnerships' that there began to appear in our Great Universe those species of beings which, as our dear Mullah Nasr Eddin would say, are 'neither fish nor fowl.'

Quoted from Beelzebubs Tales To His Grandson, chapter 'The Fourth Personal Sojourn of Beelzebub on The Planet Earth' (1924)
Share This Page: