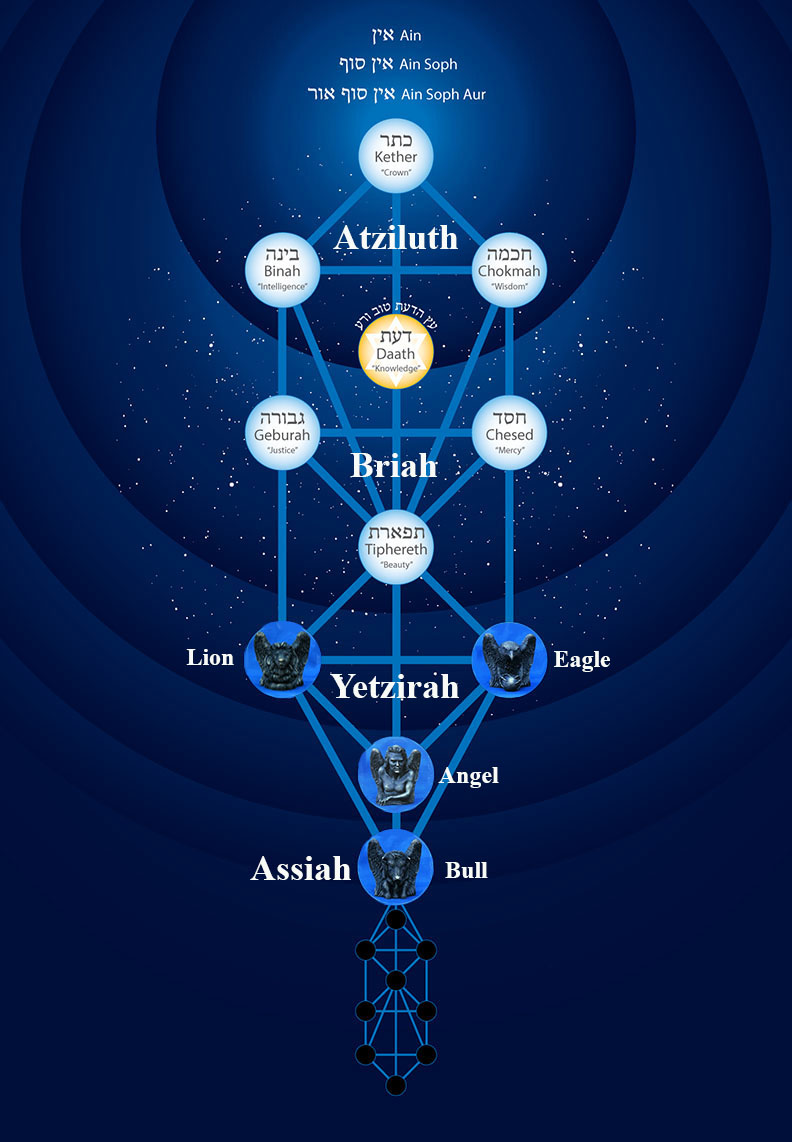 And it came to pass in the thirtieth year (the ten sephiroth of the third kabbalistic world, Yetzirah), in the fourth (Chesed), in the fifth day of that month (in the enlighten consciousness, Geburah, dominating the four elements, namely, Malkuth, Yesod, Hod and Netzach), as I (Ani אני) was among the captives by the river (פישון Pishon or) כבר Chebar that (is the mysterious river of the heavenly astral solar light, which flows forth from Ain Soph Aur into 'כ' Kether and 'ב' Binah in Atziluth, the left side of the 'ר' Rosh-Head, and from it into the throat - Daath - the upper Eden - and into Geburah in Briah, down to Hod and thereafter into Yesod in Yetzirah, but because of fornication of Adam in the garden - Malkuth - it dried up and ceased to flow into the Consciousness, which became a slave of lust, and therefore in captivity in Assiah, world of matter and action); yet, (through sexual alchemy) the heavens (of Yetzirah) were opened, and (through the sahasrara chakra) I saw (מראות אלהים Marauth Elohim) Mirrors Images of Elohim. In the fifth day of the month (in the enlighten consciousness, Geburah, dominating the moon-th), which was the fifth year (fifth initiation) of king (the Malachim in Yetzirah) Jehoiachin's captivity.

The Logos or word of יהוה (Chokmah in Daath) came expressly unto Ezekiel the priest, the son of (contempt) Buzi, in (the triangle of priesthood, Yetzirah) the land of the (שדים Sheddim) Spirits (of the Priesthood of שדי Shaddai-Yesod) by the (astral light of the) river Chebar; and the hand (the יד Iod or the סוד sod, secret of יסוד Yesod) of (the name) יהוה Iod-Havah was there upon him. (The secret is: But of the fruit of the tree which is in the midst of the garden, Elohim hath said, Ye shall not eat of it, neither shall ye touch it, lest ye die. Genesis 3:3).

And I looked, and, behold, a (רוח Ruach) spirit came out of a great (akashic) cloud in the north (sephirah Kether), and a fire infolding itself as the brightness (of the Solar Absolute) was about it, and out of the midst thereof an electric sparkle, out of the midst of the (solar) fire.

Also out of the midst thereof came the likeness of four (חיות Chaioth) living spirits And this was their appearance; they had the likeness of Adam (And אדם Adam (Aleph 1 + Daleth 4 + Mem 40 = 9, the ninth sphere, Yesod) lived an hundred and thirty years (130 = 4, the 4 inferior sephiroth, namely, Malkuth, Yesod, Hod and Netzach), and (thereafter) he is generating in his own likeness, after his image (in Tiphereth, Geburah and Chesed); and he is calling his name שת Seth (Fire, Shin 300 + the Cross, Tav 400 = 7; the triune spirit within the four bodies of gold) - Genesis 5: 2).

And their legs were straight legs (Ob and Od); and the (male-female cloven) sole of their feet (in Malkuth) was like the (cloven) sole of a calf's foot (tin and copper): and they sparkled like the color of a burnished (serpent of) brass.

And (וידו אדם Va'Iodu Adam) hands (sense of touch, the Iod-Phallus) of Adam under their wings ( soul of the mercury) on their four sides; and they four had their faces and their wings.

Thus were their faces (or fecundated mercuries): and their wings (or souls of the mercury) were stretched upward; two wings of every one were joined one to another (in Malkuth, Yesod, Hod and Netzach), and (the) two (polarities, Od and Ob) covered their bodies.

As for the likeness of the living creatures, their appearance was like burning coals of fire (sulfuric salt), and like the appearance of lamps (in the chakras): it went up and down among the (חיות Chaioth) living spirits; and the fire (sulfur) was bright, and out of the (sexual) fire went forth (the) lightning (of the Kundalini ) .

And the (חיות Chaioth) living spirits ran and returned as the appearance of a flash of (the) lightning (of the serpent of brass).

When they went, they went (as the tetragrammaton) upon their four sides: and they turned not when they went.

As for their rims (or the circular outer space part of the sephiroth), they were so high that they were dreadful; and their rims were full of eyes (stars) round about them four (in Atziluth, Briah, Yetzirah and Assiah).

When those went, these went; and when those stood, these stood; and when those were lifted up from the (salt of the) earth (up through the spinal medulla), the wheels (sephiroth) were lifted up over against them: for the spirit (or soul of the mercury) of the (חיות Chaioth) living spirit was in the wheels (sephiroth in Assiah, Yetzirah, Briah and Atziluth).

And the likeness of the firmament (Tiphereth) upon the heads of the (חיות Chaioth) living creature (the sphinx) was as the colour of the terrible crystal (crystalized soul ), stretched forth over their heads (in Briah) above (in tiphereth).

And there was a voice from the firmament (tiphereth) that was over their heads, when they stood, and had let down their wings. 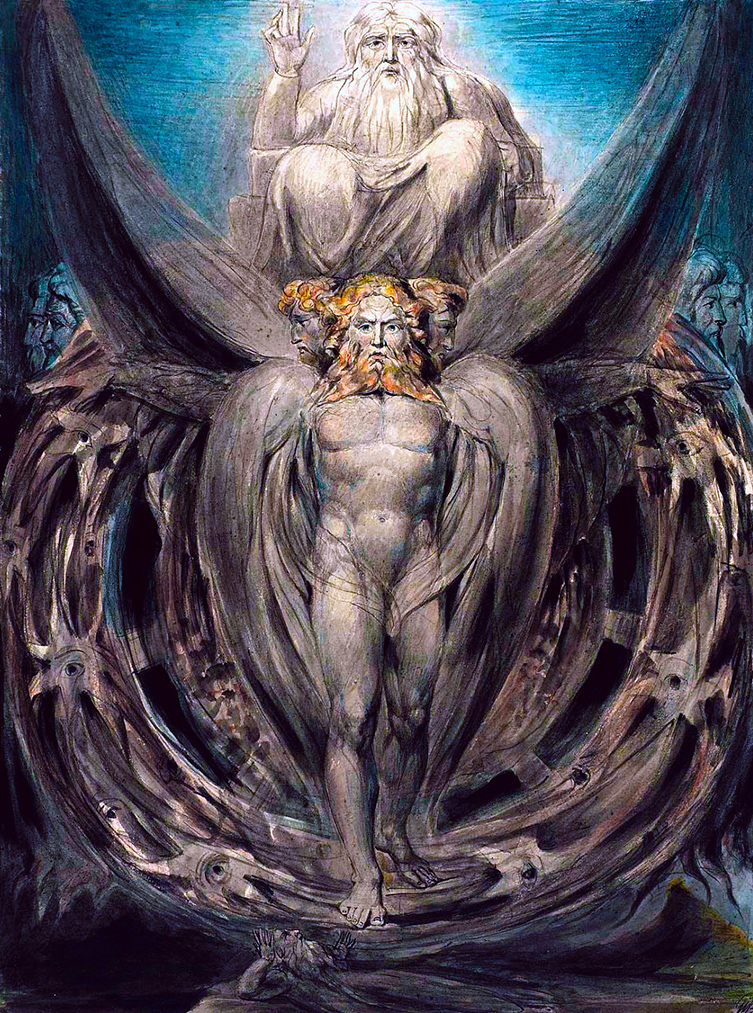