Rumi: Signs of the Unseen - The Koran 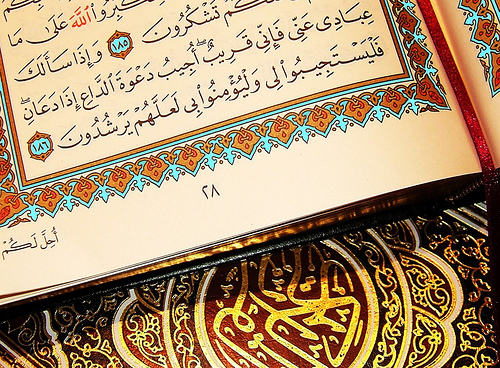 Ibn Muqri reads the Koran correctly. That is, he reads the form of the Koran correctly, but he hasn't a clue as to the meaning. The proof of this lies in the fact that when he does come across a meaning he rejects it. He reads without insight, blindly. He is like a man who holds a sable in his hand. If offered a better sable he rejects it. We realize therefore that he does not know sable. Someone has told him that what he has is sable, and so he holds onto it in blind imitation. It is like children playing with walnuts; if offered walnut oil or walnut kernels, they will reject them because for them a walnut is something that rolls and makes noise, and those other things do not roll or make noises.

God's treasure houses are many, and God's knowledge is vast. If a man reads one Koran knowledgeably, why should he reject any other Koran?

I once said to a Koran reader, "The Koran says so: Say, If the sea were ink to write the words of my Lord, verily the sea would fail, before the words of my Lord would fail [18:109]. Now for fifty drams of ink one can write out the whole Koran. This is but a symbol of God's knowledge; it is not the whole of his knowledge. If a druggist put a pinch of medicine in a piece of paper, would you be so foolish as to say that the whole of the drugstore is in this paper? In the time of Moses, Jesus, and others, the Koran existed; that is, God's Word existed; it simply wasn't in Arabic." This is what I tried to make that Koran reader understand, but when I saw that it was having no effect on him I left.

Excerpted from Chapter Eighteen of Signs of the Unseen by Jalaluddin Rumi. Published by Threshold Books (1994), translated from the Arabic by W.M. Thackston, Jr.

Relevant passage from the Qur’an [3:7]

He it is Who has sent down to thee the Book: In it are verses basic or fundamental of established meaning; they are the foundation of the Book: others are allegorical. But those in whose hearts is perversity follow the part thereof that is allegorical, seeking discord, and searching for its hidden meanings, but no one knows its hidden meanings except Allah. And those who are firmly grounded in knowledge (Ma'rifa, Gnosis) say: "We believe in the Book; the whole of it is from our Lord:" and none will grasp the Message except men of understanding (Binah, the Holy Spirit).