The Hymn of Judas Thomas the Apostle in India

This scripture is discussed in the lecture Our True Nature. There are also slides to accompany the lecture here. 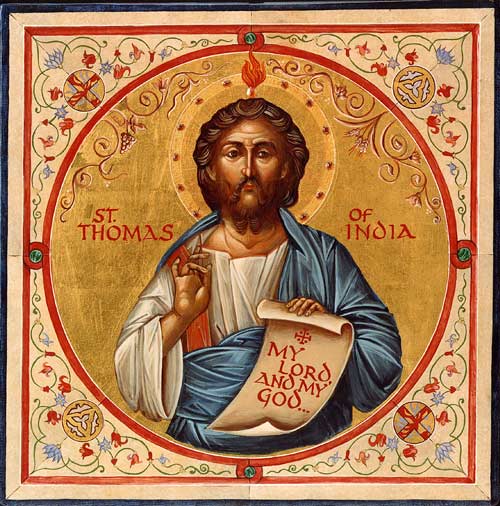 I.
When, a quite little child, I was dwelling
In the House of my Father’s Kingdom,

And in the wealth and the glories
Of my Up-bringers I was delighting,

From the East, our Home, my Parents
Forth-sent me with journey-provision.

Indeed from the wealth of our Treasure,
They bound up for me a load.

Large was it, yet was it so light
That all alone I could bear it.

Gold from the Land of Beth-Ellaya,
Silver from Gazak the Great,

They girt me with Adamant [also]
That hath power to cut even iron.

My Glorious Robe they took off me
Which in their love they had wrought me,

And my Purple Mantle [also]
Which was woven to match with my stature.

And with me They [then] made a compact;
In my heart wrote it, not to forget it:
"If thou goest down into Egypt,
And thence thou bring’st the one Pearl --

"[The Pearl] that lies in the Sea,
Hard by the loud-breathing Serpent --

"[Then] shalt Thou put on thy Robe
And thy Mantle that goeth upon it,

"And with thy Brother, Our Second,
Shalt thou be Heir in our Kingdom."

I left the East and went down
With two Couriers [with me];

For the way was hard and dangerous,
For I was young to tread it.

I traversed the borders of Maishan,
The mart of the Eastern merchants,

And I reached the Land of Babel,
And entered the walls of Sarbãg.

Down further I went into Egypt;
And from me parted my escorts.

Straightway I went to the Serpent;
Near to his lodging I settled,

To take away my Pearl
While he should sleep and should slumber.

Lone was I there, yea, all lonely;
To my fellow-lodgers a stranger.

However I saw there a noble,
From out of the Dawn-land my kinsman,

A young man fair and well favoured,
Son of Grandees; he came and he joined me.

I made him my chosen companion,
A comrade, for sharing my wares with.

He warned me against the Egyptians,
’Gainst mixing with the unclean ones.

For I had clothed me as they were,
That they might not guess I had come

From afar to take off the Pearl,
And so rouse the Serpent against me.

But from some occasion or other
They learned I was not of their country.

With their wiles they made my acquaintance;
Yea, they gave me their victuals to eat.

I forgot that I was a King’s son,
And became a slave to their king.

I forgot all concerning the Pearl
For which my Parents had sent me;

And from the weight of their victuals
I sank down into a deep sleep.

All this that now was befalling,
My Parents perceived and were anxious.

It was then proclaimed in our Kingdom,
That all should speed to our Gate --

Kings and Chieftains of Parthia,
And of the East all the Princes.

And this is the counsel they came to:
I should not be left down in Egypt.

And for me they wrote out a Letter;
And to it each Noble his Name set:

"From Us -- King of Kings, thy Father,
And thy Mother, Queen of the Dawn-land,

"And from Our Second, thy Brother --
To thee, Son, down in Egypt, Our Greeting!

"Up an arise from thy sleep,
Give ear to the words of Our Letter!

"Remember that thou art a King’s son;
See whom thou hast served in thy slavedom.

Bethink thyself of the Pearl
For which thou didst journey to Egypt.

"To put on and wear as adornment,
When thy Name may be read in the Book of the Heroes,

"And with Our Successor, thy Brother,
Thou mayest be Heir in Our Kingdom."

My Letter was [surely] a Letter
The King had sealed up with His Right Hand,

’Gainst the Children of Babel, the wicked,
The tyrannical Daimons of Sarbãg.

It flew in the form of the Eagle,
Of all the winged tribes the king-bird;

It flew and alighted beside me,
And turned into speech altogether.

At its voice and the sound of its winging,
I waked and arose from my deep sleep.

Unto me I took it and kissed it;
I loosed its seal and I read it.

E’en as it stood in my heart writ,
The words of my Letter were written.

I remembered that I was a King’s son,
And my rank did long for its nature.

I bethought me again of the Pearl,
For which I was sent down to Egypt.

And I began [then] to charm him,
The terrible loud-breathing Serpent.

I lulled him to sleep and to slumber,
Chanting o’er him the Name of my Father,

The Name of our Second, [my Brother],
And [Name] of my Mother, the East-Queen.

And [thereon] I snatched up the Pearl,
And turned to the House of my Father.

Their filthy and unclean garments
I stripped off and left in their country.

To the way that I came I betook me,
To the Light of our Home, to the Dawn-land.

On the road I found [there] before me,
My Letter that had aroused me --

As with its voice it had roused me,
So now with its light it did lead me --

On fabric of silk, in letter of red [?],
With shining appearance before me [?],

Encouraging me with its guidance,
With its love it was drawing me onward.

I went forth; through Sarbãg I passed;
I left Babel-land on my left hand;

And I reached unto Maishan the Great,
The meeting-place of the merchants,

That lieth hard by the Sea-shore.

My Glorious Robe that I’d stripped off,
And my Mantle with which it was covered,

Down from the Heights of Hyrcania,
Thither my Parents did send me,

By the hands of their Treasure-dispensers
Who trustworthy were with it trusted.

Without my recalling its fashion, --
In the House of my Father my childhood had left it,--

At once, as soon as I saw it,
The Glory looked like my own self.

That we were twain in distinction,
And yet again one in one likeness.

I saw, too, the Treasurers also,
Who unto me had down-brought it,

Were twain [and yet] of one likeness;
For one Sign of the King was upon them --

Who through them restored me the Glory,
The Pledge of my Kingship [?].

The Glorious Robe all-bespangled
With sparkling splendour of colours:

With Gold and also with Beryls,
Chalcedonies, iris-hued [Opals?],

With Sards of varying colours.
To match its grandeur [?], moreover, it had been completed:

With adamantine jewels
All of its seams were off-fastened.

[Moreover] the King of Kings’ Image
Was depicted entirely all o’er it;

And as with Sapphires above
Was it wrought in a motley of colour.

I saw that moreover all o’er it
The motions of Gnosis abounding;

I saw it further was making
Ready as though for to speak.

I heard the sound of its Music
Which it whispered as it descended [?]:

"Behold him the active in deeds!
For whom I was reared with my Father;

"I too have felt in myself
How that with his works waxed my stature."

And [now] with its Kingly motions
Was it pouring itself out towards me,

And made haste in the hands of its Givers,
That I might [take and] receive it.

And me, too, my love urged forward
To run for to meet it, to take it.

And I stretched myself forth to receive it;
With its beauty of colour I decked me,

And my Mantle of sparkling colours
I wrapped entirely all o’er me.

I clothed me therewith, and ascended
To the Gate of Greeting and Homage.

I bowed my head and did homage
To the Glory of Him who had sent it,

Whose commands I [now] had accomplished,
And who had, too, done what He’d promised.

[And there] at the Gate of His House-sons
I mingled myself with His Princes;

For He had received me with gladness,
And I was with Him in His Kingdom;

To whom the whole of His Servants
With sweet-sounding voices sing praises.

He had promised that with him to the Court
Of the King of Kings I should speed,

And taking with me my Pearl
Should with him be seen by our King.

The Hymn of Judas Thomas the Apostle, which he spake in prison, is ended.