The Book of Revelation: The Two Witnesses 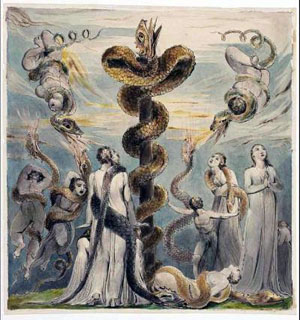 And there was given me (in my physical body) a reed like unto a rod (which is my spinal column): and the angel (or my Innermost) stood, saying, Rise (the Son of Man as Moses lifted up the Serpent of Bronze in the wilderness), and measure (the physical body, which is) the temple of God, and the altar (the heart), and them (the souls ) that worship therein. Revelation 11: 1

But the court (subconsciousness, unconsciousness and infraconsciousness) which is without the temple leave out, and measure it not; for it is given unto the Gentiles (that are those psychological elements that do not follow the will of the Innermost): and the holy city (the physical body) shall they tread under foot (with fornication, adultery and all kind of sexual perversity) forty and two months (42 = 6, the Arcanum of the Lovers, Passion, Sexual Desire). Revelation 11: 2

And (nonetheless) I will give power unto my two witnesses (Adam and Eve, Od and Ob, Yin and Yan, Ida and Pingala), and they shall prophesy (reveal the mystery of the Son of Man or the Serpent of Bronze, which is the will of the Holy Spirit of God in the wilderness) a thousand two hundred and threescore days (1260 = 9, in the Ninth Sphere, Yesod, Sex), clothed in sackcloth (clothed in chastity, repentance and penitence). Revelation 11: 3

These are (Adam and Eve) the two olive trees, and the two candlesticks standing (on the Sexual Gonads and entwined all around the spinal column to the Pineal Gland) before (the Tree of Knowledge – Daath, the Caduceus of Mercury, where) the God of the earth (the Holy Spirit abides). Revelation 11: 4

And if any (Perverted Tantric) man will hurt them (by means of sexual promiscuity, sodomy or any kind of sexual perversion), (the) fire (of the Holy Spirit) proceedeth out of their mouth, and devoureth their (animal appetites or) enemies (of God): and if any man (or woman) will hurt them (by means of Black Tantra) , he must in this manner (by the same perverted power) be killed (through the second death, in Klipoth, the Abyss). Revelation 11: 5

These (two ganglionic cords, Adam and Eve) have power to shut (the door of) heaven (when we sexually degenerate), that (if we are in chastity) it rain not (the karma) in the days of their prophecy (which is where the mystery of the Son of Man or the Serpent of Bronze, which is the will of the Holy Spirit of God in the wilderness is revealed): and (nonetheless, if we spill the semen or sexual waters - even if we are officially married - they) have power over the waters (of fornication) to turn them (because of sodomy or any kind of sexual perversion) to blood, and to smite (with this poisoned blood) the earth (physical body) with all plagues, as often as they will (according with Karma, Kamaduro and Karmasaya). Revelation 11: 6

And (nonetheless) when they (within those who follow the right path, that is, the path of chastity) shall have finished their testimony (from testis, witness; that is, they shall have witnessed the marvels that the Holy Spirit have done within them), the beast (that is, their animal perverted ego) that ascendeth out (of their subconsciousness, unconsciousness and infraconsciousness) of the bottomless pit (of Klipoth) shall make (according with Kamaduro and Karmasaya) war against them, and shall overcome them, and kill them (because “all manner of sin and blasphemy shall be forgiven unto men: but the blasphemy against the Holy Ghost shall not be forgiven unto men.” – Matthew 12: 31 – that is – “But of the tree of the knowledge of good and evil, thou shalt not eat of it: for in the day that thou eatest thereof thou shalt surely die.” - Genesis 2: 16). Revelation 11: 7 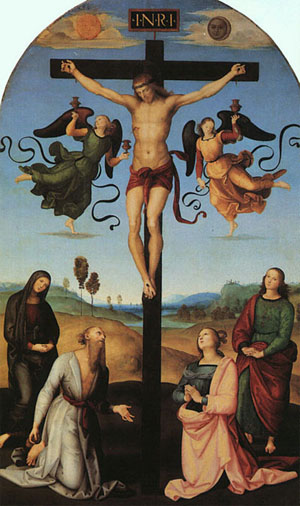 And their dead bodies (already mingled with the ego) shall lie in the street (ganglionic canals or avenues) of the great city (physical body, Malkuth), which spiritually is called Sodom and Egypt, where also our Lord was crucified. Revelation 11: 8

And they (the genotype) of the (fornicator) people and kindreds and tongues and nations (that circulate within our blood) shall see their dead bodies three days and an half (within the belly of the whale – Malkuth – physical body - until the sign of Jonah is fulfilled within the psyche), and shall not suffer their (protoplasmic) dead bodies to be put in graves (until their ego is completely annihilated). Revelation 11: 9

And (the egotistical perversity of) they that dwell upon the earth (physical body) shall rejoice over them, and make merry, and shall send gifts one to another; because (the divine consciousness of Adam and Eve, Ida and Pingala or) these two prophets (advocates of the will of God, who by means of upright judgment) tormented (the animal perversities of ) them that dwelt on the earth (physical body). Revelation 11: 10

And after three days and an half (when the sign of Jonah was fulfilled within their psyche) the Spirit of life from God (Shaddai-El-Chai, the Son of Man) entered into them, and they stood upon their feet; and great fear fell upon (the internal lustful, psychological, animal elements or lower passions) which saw them. Revelation 11: 11

And in the same hour (the hour of comprehension, superlative analysis and psychological decapitation) was there a great earthquake (within the interior of the earth, or subconsciousness, unconsciousness and infraconsciousness of the physical body), and the tenth (psychological) part of the city (that is Malkuth) fell (into Klipoth the Abyss), and in the earthquake were slain of men seven thousand (“therefore whosoever slayeth Cain, vengeance shall be taken on him sevenfold” – Genesis 4: 15): and the remnant (within the whale – Malkuth or physical body, or the graves of Adam and Eve were opened; and the psyche which slept within them awoke and arose free and)) were affrighted, and gave glory to the God of heaven. Revelation 11: 13

The second woe is past; and, behold, the third woe cometh quickly.  - Revelation 11:14