Editor's Note: The following text was presented by Manly P. Hall in his monumental Secret Teachings of All Ages, and was fully explained in the Arcanum 15 lecture of the course The Twenty-two Arcana of Tarot and Kabbalah. We excerpt it here in order to emphasize the unique and useful nature of the text. 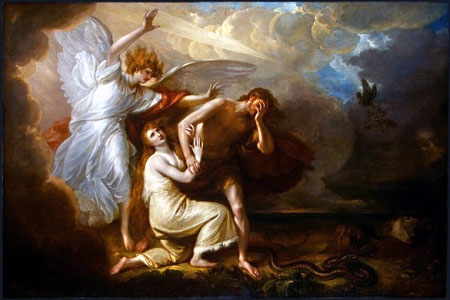 Adam, banished from the Garden of Eden, represents (the soul of) man philosophically exiled from (the inner circle of Samech) the sphere of Truth.

Through ignorance (of Samech, the Vulva or Volva, the feminine sexual power, the soul of) man falls; through wisdom (Chokmah, the fruit of the Divine Mother Kundalini ) he redeems himself.

The Garden of Eden represents the House of the Mysteries (Daath in Yesod) in the midst of which grew both the Tree of Life (the Being) and the Tree of the Knowledge of Good and Evil (the whirling solar force of the Ain Soph Aur).

(The soul of the) Man, the banished Adam, seeks to pass from the outer court (or outer circle of Samech) of the Sanctuary (the exterior universe) into the sanctum sanctorum (Eden, the inner circle), but before him rises a vast creature (the whirling Cherubim or Christus-Lucifer) armed with a flashing sword (the fiery passion in his blood) that, moving slowly but continually (circulates the solar-life-force of the Ouroboros in his physical body), sweeps clear a wide circle, and through this "Ring Pass Not" the Adamic man (the sinning Adam) cannot break.

The cherubim (Christus Lucifer) address the seeker thus: "Man, you (and your subjective reasoning) are dust (from Klipoth) and to dust you shall return (through the second death). You were fashioned by the Builder of Forms (in the mechanical circle of evolution and devolution of Malkuth); you belong to (Assiah) the sphere of form, and the breath that was breathed into your soul was the breath of (Maya, Illusion of Matter) form and like a (fatuous) flame (of desire) it shall flicker out. (Through the mechanical circle of evolution and devolution) More than what you are you cannot be. You are a denizen of the outer world (the outer circle of Samech) and it is forbidden onto you to enter this inner place (inner circle of Samech)."

And the (sinning soul of) Adam replies: "Many times (through the law of return and recurrence) have I (with different physical bodies) stood within this courtyard (Malkuth) and begged admission to my Father's house (the Kingdom of Heaven) and you have refused it me and sent me back to wander in darkness (of Klipoth). True it is that I was fashioned out of the dirt (of fornication) and that (because of the filthy sexual orgasm) my Maker could not confer upon me the boon of immortality. But no more shall you send me away; for, wandering in the darkness (of sin), I have discovered that the Almighty (El Shaddai who hides Samech in Yesod of Atziluth) has decreed my salvation because He has sent (through the Ouroboros) out of the most hidden Mystery (the Sephirah Daath) His Only Begotten (Christus-Lucifer, the Light of the Ain Soph) who (by descending into the Ninth Sphere of Malkuth - Assiah) did take upon Himself the world fashioned by the Demiurgeous (of Malkuth - Assiah). Upon the elements of that world (of Assiah) was He crucified and from Him (the Ouroboros, Samech) has poured forth (in Yesod, the sexual organs) the blood (Solar Light of the Ain Soph Aur) of my salvation. And God (the Ain Soph Aur, Christus-Lucifer), entering into His creation, has quickened it and established therein a road (of Initiations of fire and initiations of light) that lead to Himself (in the Absolute). While my Maker (in the outer circle of Samech) could not give me immortality, immortality was inherent (in the inner circle of Samech) in the very dust (or physical atoms of Malkuth - Assiah) of which I was composed, for before the world was fabricated and before the Demiurgeous became the Regent of Nature (in Malkuth) the Eternal Life (of the Ain Soph Aur, Christus-Lucifer) had impressed itself upon the face (and root) of any Cosmos. This is its sign--the Cross (of Sexual Alchemy). Do you now deny me entrance, I who have at last learned the mystery of myself (that is my Being within the essence of your Being)?"

And the voice (the Word) replies: "He who is aware (of his Being and the essence of his Being), IS! Behold!"

Gazing about him, Adam finds himself in a radiant (solar) place (the inner circle of Samech), in the midst of which stands a tree with flashing jewels for fruit and entwined about its trunk (is Nachash, the Serpent that healed the Israelites in the Wilderness) a flaming, winged serpent crowned with a diadem of stars. It was the voice of the serpent that had spoken.

"Who are you?" demands the Adam.

"I," the serpent (Nachash) answers, "am (in the inner circle of Samech, the Serpent that healed the Israelites in the Wilderness and in the outer circle of Samech, am) Satan who was stoned (because of your filthy orgasm) ; I am (Christus-Lucifer, the only begotten, the Light of the Ain Soph,) the Adversary--the Lord who is against you, the one who pleads for your destruction (in the abysses of Klipoth) before the Eternal Tribunal. I was your enemy upon the day that you were formed (from my very essence but ignorant of my nature); (this is why) I have led you into temptation; I have delivered you into the hands of evil; I have maligned you; I have striven ever to achieve your undoing (through a psychological transformation in Alchemy). I am the guardian of the Tree of Knowledge (of my own essence) and I have sworn that none whom I can lead astray (through, fornication, adultery and any filthy sins of the flesh) shall partake of its fruits (which hide the light of my Father the Ain Soph)."

“The Adam replies: "For uncounted ages have I been you servant (through desire, the sins of the flesh). In my ignorance (of the very essence of your Father, the Ain Soph) I listened to your words and they led me into paths of sorrow. (Through desire) You have placed in my mind dreams of power, and when I struggled to realize those dreams they brought me naught but pain (because nothing is permanent in the world of matter). You have sowed in me the seeds of desire, and when I lusted after the things of the flesh agony was my only recompense. You have sent me false prophets (from Klipoth) and false (subjective) reasoning, and when I strove to grasp the magnitude of Truth I found your laws were false (impermanent) and only dismay rewarded my strivings. I am done with you forever, Oh artful Spirit (of the Uncreated Light)! I have tired of your world of illusions (the outer circle of Samech). No longer will I labor in your (Physical and Klipothic) vineyards of iniquity. Get thee behind me, tempter, and the host of your temptations. There is no happiness, no peace, no good, no future in the doctrines of selfishness, hate, and passion preached by you (in the outer circle of Samech). All these (Klipothic) things do I cast aside (from my Psyche). Renounced is your rule (in the outer circle of Malkuth) forever!"

“And the serpent (Nachash, the Serpent that healed the Israelites in the Wilderness) answered: "Behold, Oh Adam, the nature of your Adversary!" The serpent disappears in a blinding sunburst of radiance and in its place stands an angel resplendent in shining, golden garments with great scarlet wings that spread from one corner of the heavens to the other. Dismayed and awestruck, the Adam falls before the divine creature.

"I am the Lord who is against you and thus accomplishes your salvation,” continues the voice (the Word). "You have hated me, but through the ages yet to be you shall bless me, for I have led you out of the sphere of the Demiurgeous (the outer circle of Samech, Assiah, Malkuth); I have turned you against the illusion of worldliness; I have weaned you of desire; I have awakened in your soul the immortality of which I myself partake. Follow me, Oh Adam, for I am the Way, the Life, and the Truth!"

Revelation 3: 14-16: These things say the Amen, the faithful and true witness (Christus-Lucifer) the beginning of the creation of God; I know your works, that you are neither cold nor hot: I would you were cold or hot. So then because you are lukewarm, and neither cold nor hot, I will spew you out of my mouth. (I hate the lukewarm; but I love your Law. Psalm 119: 113)

Revelation 19: 11-16: And I saw heaven opened, and behold a white horse; and he that sat upon him was called Faithful and True, and in righteousness he doth judge and make war (because he is the God of War). His eyes were as a flame of fire, and on his head were many crowns; and he had a name written, that no man knew, but he himself. And he was clothed with a vesture dipped in blood: and his name is called (Alpha and Omega) the Word of God. And the armies which were in heaven followed him upon white horses, clothed in fine linen, white and clean. And out of his mouth goes a sharp sword, that with it he should smite the nations: and he shall rule them with a rod of iron: and he (Christus-Lucifer) treads (Yesod) the winepress of the fierceness and wrath of (El Shaddai) Almighty God (You have trampled all who go astray from your statutes; for their deceit is falsehood – Psalm 119:118). And he hath on his vesture and on his thigh (sex) a name written, King of Kings, and Lord of Lords (My flesh has shivered because of your ardor, and I have feared your judgments – Psalm 119:120).

Revelation 22: 12-16: And, behold, I come quickly; and my reward is with me, to give every man according as his (sexual) work shall be. I am (within Samech, the) Alpha and Omega, the beginning and the end (of the outer circle), the first and the last (in the inner circle). Blessed are they that do his commandments that they may have right to the tree of life (their Spinal Medulla), and may enter in (the inner circle, the Kingdom of Heaven) through the gates (of Yesod, Sex) into the city (of Heliopolis, the New Jerusalem). For without (in the outer circle of Malkuth, Assiah) are dogs, and sorcerers, and whoremongers, and murderers, and idolaters, and whosoever loves (fornication and adultery) and makes a lie (with his subjective reasoning). I Jesus (the Savior, the Ain Soph Aur) have sent mine angel (the Atom Nous) to testify unto you these things in the churches (or chakras of your Spinal Medulla). I (in Yesod) am the root and the offspring (the Malachim) of David (the six pointed star), and the bright and dawning star (Lucifer). 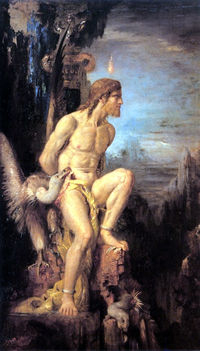 ”Behold what I (Christus-Lucifer), a God, from Gods endure!
"Look down upon my shame,
"The cruel wrong that racks my frame,
"The grinding anguish that shall waste my strength...”