This short passage is another example of the importance of water in the Gospels of Jesus. Its true meaning can only be grasped in context of Kabbalah; thus, we have provided some notes in brackets to explain the initiatic symbolism. You can learn more about each aspect by using the search tool and the online glossary at Gnostic Teachings.

After this there was a feast of the Jews; and Jesus went up to Jerusalem.

Now there is at Jerusalem by the sheep market a pool [a Mikvah: sacred bath], which is called in the Hebrew tongue Bethesda [house of the waterfall], having five porches [stages of initiation: the five initiations of Major Mysteries].

In these lay a great multitude of impotent folk [having no strength], of [spiritually] blind, halt, withered [due to the ego], waiting for the moving of the water [for initiation].

For an angel went down at a certain season into the pool, and troubled the water [with ordeals]: whosoever then first after the troubling of the water stepped in [courageously] was made whole of whatsoever disease [ego] he had [and earned the initiation and healing].

And a certain man was there, which had an infirmity thirty and eight years [he was a beginner in initiation]. 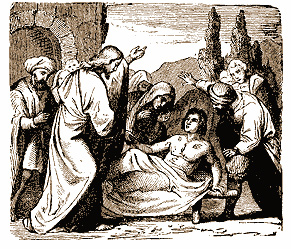 When Jesus saw him lie, and knew that he had been now a long time in that case, he saith unto him, "Wilt thou be made whole?"

The impotent man answered him, "Sir, I have no man [Human Soul, Tiphereth: John the Baptist to baptize him], when the water is troubled [active], to put me into the pool: but while I am coming, another [ego] steppeth down before me."

Jesus [Yeshua, the Savior Christ, the fire in the water] saith unto him, "Rise [thy sexual strength by my grace], take up thy bed [of marriage in accordance with my doctrine], and walk [into the path of initiation]."

And immediately the man was made whole, and took up his bed [from disgrace], and walked [on the path towards purity]: and on the same day was the sabbath [and the Man was made, and God rested].